Dozens of protesters cheered as councillors threw out plans to build 10 homes on the edge of the playing field at Varndean College in Brighton.

The Save Varndean Green campaigners held a demo outside Hove Town Hall before the meeting of Brighton and Hove City Council’s Planning Committee.

They have been fighting a proposal by Varndean College to build 10 homes. Three of the houses were intended to be affordable – two for rent and one in shared ownership.

Officials said that there was demand for larger homes locally and the sheme had one two-bedroom property, six three-bed homes and three with four bedrooms.

The Planning Committee voted five to four against granting planning permission when the application went before them this afternoon (Wednesday 6 March).

Speaking on behalf of Save Varndean Green, campaigner Sue Dibb, who lives in nearby Friar Crescent, said that the group would challenge the application in any way that it could if it went through.

Concerns were raised about the effect on the butterfly haven, which was set up in 2012 with a lifespan of 25 to 30 years. The committee was told that it could not be relocated.

Ms Dibb said: “It took five years for the protected small blue to become established there.

“The proposed site is an access route regularly used to gain access to the top playing field.”

The current site is linked with the Surrenden Road wildlife corridor and the proposed new site would be separate them.

Varndean College’s field is listed as an asset of community value and neighbours are also concerned about the loss of the sea view.

Campaigners wanted the application deferred as they did not believe that councillors had enough time to consider all aspects of it. 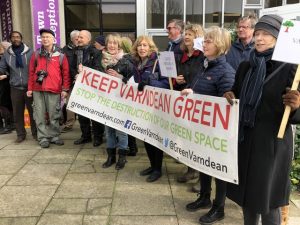 He said: “No master plan from the college has been shared publicly, meaning that the cumulative impact of these developments cannot be properly assessed.

“This area is designated nature improvement land and is therefore a material consideration under the city plan.”

Councillor Taylor and the campaigners said that Natural England and the South Downs National Park had not been consulted.

The committee heard that Natural England was not consulted as the site does not include a site of special scientific interest.

Sport England, the organisation responsible for encouraging grass-roots sport, was not opposed to the plans, describing the area of the field as “unused”.

While neighbours say that part of the field is used by them for play, it is not officially a playing field but an open space.

Conservative councillor Joe Miller asked what the development would fund.

Councillors were told if the college was built today it would need 100 toilet cubicles but currently has 25.

Dr Harland said: “Sixth forms are the highest performing education sector in the UK, described as the jewel in the crown of education. There were 130 there are now 63. Brighton is lucky to have two.

“There is an existential threat facing the sector and the money will secure the future.”

Planning consultant Mark Hoskins, for the college, said that sixth forms were under threat from hostile takeovers.

Conservative councillor Lynda Hyde was not convinced by the arguments in favour of biodiversity.

She said: “I went on the site visit and saw the butterfly area. It has been neglected recently and it seems more like a go-cart track than a biodiversity site.

“I am sorry for the people here but this is how I judge it.”

Patcham ward Conservative councillor Carol Theobald said that the area was an important green lung by the busy Surrenden Road.

She said: “Traffic is a problem in Surrenden Road. It is congested and full of parked cars and vans.

“That overflow from this is going to make a difference to that road and I will object.”

Labour councillor Jackie O’Quinn, who represents Goldsmid ward in Hove, spoke about the earlier campaign to save BHASVIC field.

She said: “I do not like the idea of building on school land. These are open spaces.

“We set a precedent when we start building houses on school land.

“They have this extremely large amount of playing field. It think it is incredibly important to retain that.”

Green councillor Leo Littman said that he was concerned about development “nibbling” away at the space and moving the nature improvement area.

Councillor Littman said: “The reason why the nature improvement area is where it is, is because it is not a widely accessible area.

“It is a wild space in the city which is wonderful.”

They said that it would result in a loss of open space, loss of biodiversity area and the loss of public amenity.