Greens agree to work with Labour – with focus on climate crisis, housing and austerity 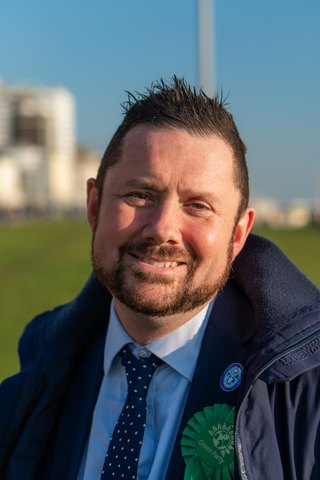 Brighton and Hove’s Green party has announced it is willing to work with Labour – and has placed climate crisis, housing and homelessness and austerity at the top of its agenda.

The party’s councillors announced today it had elected two new deputies to serve under leader Phélim Mac Cafferty, who has also been re-elected to his post of convenor.

Cllr Shanks was elected in St Peter’s and North Laine, having previously served in Withdean. Councillor Clare, who at 26 is one of the city’s youngest councillors, was elected to Brunswick and Adelaide alongside Councillor Mac Cafferty.

Today, the group unveiled a pledge to the city, its first official response to Labour and outlining its priorities in working with Labour.

The pledge says: “We thank the city for electing so many new Green voices and we welcome the invitation from Labour to discuss how we can work together to make a difference for our residents.

“Yet political parties are not the only voices. To achieve truly transformative politics, we also need to take the conversation about how to tackle these issues back to our communities.

“Greens pledge to residents in our city that we will work with all partners – from the Labour Party, to our community groups, voluntary sector and local businesses – to deliver urgent action on critical issues; especially our climate crisis, housing and homelessness and austerity.

“We would welcome the opportunity to work with Labour councillors to set up our shared vision of a citizen’s assembly on the climate crisis. We are also keen to explore a City Climate and Biodiversity Crises Summit.

“We believe now is the time for cross-party action on housing and homelessness. In the face of national uncertainty from a disastrous Brexit, all parties must jointly uphold our status as a city of sanctuary and welcome.

“Over the next four years we will work with the Labour council to achieve what is best for our city.

“We will never fail to challenge on behalf of our residents, and we will also present new ideas and hold Labour to account when scrutiny is needed.

“We pledge to stand up for what is best for our city; and to continue to hold our council to the high standards our city expects and deserves.”

Councillor Phélim Mac Cafferty added: “I am thrilled to unveil our promise to the city today that shows our commitment to doing politics differently and working collaboratively on the issues that residents have regularly told us are their highest concerns.

“Having discussed this with our party membership, we will bring our pledge into discussions with the Labour Group of Councillors over the coming weeks offering a new kind of politics for the residents of Brighton and Hove”.