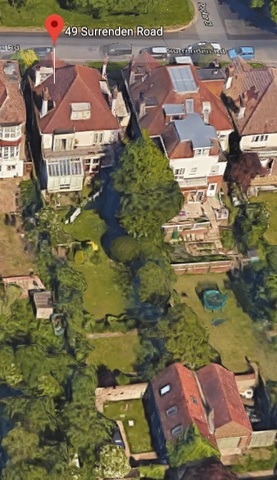 The owners of a tiny Brighton coach house have been told they can turn it into a holiday let – but only for a one year trial run.

The former coach house in Surrenden Road was previously deemed too small to be used as a permanent home so an application to use it for holiday rentals was instead submitted.

But after neighbours raised concerns about noise from parties and increased traffic, Brighton and Hove City Council’s planning committee was asked to decide.

When they met on Wednesday night, Labour councillor Clare Moonan asked for conditions on how late people could use its outside space.

She said: “People do behave differently when they’re on holiday in terms of noise and partying and staying up late.

“If you enforce every time you get noisy visitors they’ve gone back home again, that wouldn’t work either. You could get a string of people who could genuinely disturb the neighbourhood.”

Jackie O’Quinn was concerned about noise as she suspected the building would be used as an Air B’n’B.

She said: “There’ll be there for a weekend and be gone.

“It can bring quite a lot of disturbance in the area.”

She was also concerned about the small size of the bedrooms which she did not consider big enough for four people.

Councillor O’Quinn was also concerned it could be turned into a family home, but was assured it was too small.

He said: “There is indeed a great deal of concerns and particular problems with this type of use.

“How do we prevent more of this happening before it happens.”

He was assured by officers environmental health would be able to deal with noise nuisance.

The committee agreed with officers’ recommendations for conditions of a limit of four people staying at any one time, and 12 months temporary permission, described as a trial run.

Any future permanent permission would depend on whether any complaints were received.

Six of the seven-strong committee voted in favour of the plans, with Councillor O’Quinn abstaining from the vote.