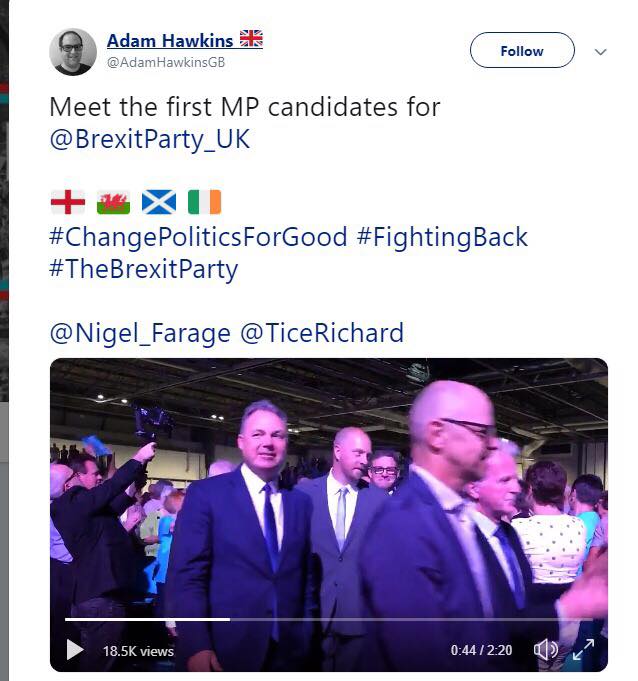 A former Hove Labour councillor has been shortlisted by the Brexit Party to become one of their parliamentary candidates.

Tom Bewick was vocal in his support for Brexit while representing Westbourne ward, but quit the party two months ago, partly over the party’s reluctance to endorse leaving the EU. He had already announced he would not be contesting his seat.

On Sunday, Mr Bewick was one of 100 men and women who walked through a Brexit Party rally having been introduced as the party’s future candidates.

None of them have been named by the Brexit Party, and the tweet above posted by one of the 5,000 attendees has since been deleted.

Mr Bewick declined to comment and referred queries to the Brexit Party press office, which said: “Candidates are currently long-listed. At this stage no seats have been allocated.

“We will be releasing the full list of PPC names against the seats they will contest in due course.”

In 2017, he put his name forward to become Labour’s parliamentary candidate for Brighton Kemptown, but was beaten by Lloyd Russell-Moyle, who has been outspoken in calling for a second referendum.

Like the Brexit Party MEPS, he also has strong opinions about national anthems, having tweeted last year: “Watching the big cup final – national anthem playing, God Save the Queen.

“My six-year-old daughter says she doesn’t know it! That’s how anti-patriotic and PC our schools system has become. Shocking really.” 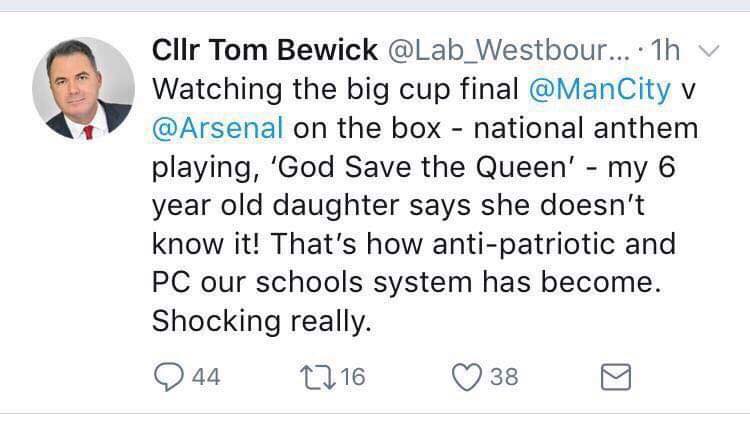 Mr Bewick had formerly been the council’s education spokesman, a role he stepped down from following the reversal of controversial cuts to the youth service.

Mr Jones denied the claims, which an investigation found no evidence of, and said the pair had fallen out over a string of arguments, including the purchase of a leather sofa for Mr Bewick’s office.

Before that, he was an adult skills advisor to Tony Blair’s government.

Although most if not all of his local Labour colleagues were staunchly pro-Remain, including MPs Peter Kyle and Lloyd Russell-Moyle, last week, his local Labour group, the Hove Constituency Labour Party (CLP) passed a motion urging the party to honour the 2016 referendum result.

At the 2016 referendum, 68.6% of people voting in Brighton and Hove opted to remain.