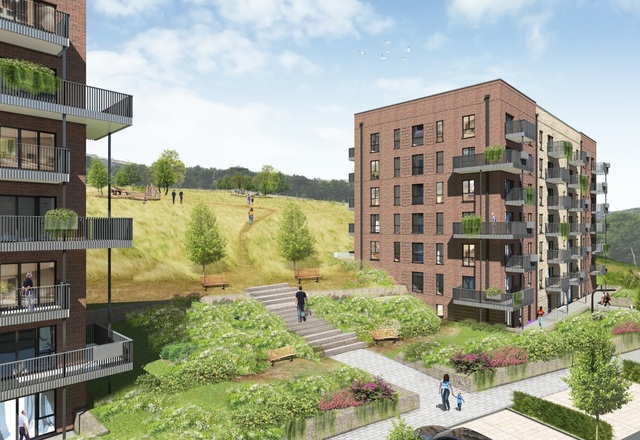 An artist’s impression of the plans

Hundreds of people have objected to the city council’s flagship scheme to build hundreds of affordable homes because of concerns over traffic and over-population.

Brighton and Hove City Council’s joint venture with Hyde Housing to build 1,000 affordable homes has already been forced to drop one of its proposed sites on Whitehawk Hill because of a community campaign.

Now people living near another of the proposed sites in Coldean have objected en masse to the plans for more than 200 homes on a triangle of land between Coldean Lane and the A27.

Despite this, planning officers are recommending that councillors approve the scheme of two seven-storey and four six-storey buildings providing 242 homes on the plot to the north of Varley Halls.

Half the homes will be available for rent at a national living wage rate, defined as 37.5 per cent of the market rate, with the other half in shared ownership with Hyde.

Ahead of the Planning Committee meeting on Wednesday 10 July, people have sent 104 letters of objection and just four in support of the scheme.

A petition against the project on Change.org currently has more than 800 signatures.

Concerns range from increased traffic to the design and loss of green space, with 20 raising concerns about wildlife.

All comments are published anonymously on the council website.

One objector wrote: “The Coldean area has endured the football stadium, massive university expansions and a huge increase of student population.

“Please build the houses in an area that does not have the increase in population that we have had.”

Another neighbour said: “There are alternative, large, empty buildings around Brighton (eg at Brighton General Hospital) which the council could turn into affordable homes.

“Therefore it’s clear that to make affordable homes it is completely unnecessary to build on the green space and wildlife.”

Raising the wildlife and traffic issue another objector wrote: “It will have a horrific impact on the wildlife on the proposed site which includes badgers, hares, hedgehogs, roe deer and many insects and birds.

“It will be negative for the surrounding roads which are already clogged with student vehicles.

“The road junction will be highly dangerous and is an accident waiting to happen.”

There are eight badger setts on the site, of which five are in use, according to county ecologist Kate Cole. She says the two outlier setts can be closed and the active ones kept with a “sufficient buffer zone”.

Low but breeding populations of slow worm and common lizard were also recorded on site. Dr Cole said these populations can be kept on site as suitable habitat would remain along the eastern boundary.

A survey of dormice in the area found no sign of the creatures.

South Downs National Park Authority has objected to the development describing it as over-development, and stating the site was originally proposed as a nature reserve.

The authority has asked for restrictions to prevent lights shining into the sky at night to protect the International Dark Sky Reserve, Moore’s Reserve, which covers Ditchling Beacon in the national park.

Should the application be granted, it’s proposed the developers will pay an educational contribution of £252,021, which will go toward the cost of secondary and sixth form education at Brighton Aldridge Community Academy.

The council’s local employment scheme would receive £81,400, open spaces, playgrounds and indoor sport would receive £671,247.34 and £100,000 would be put aside for an artistic element to form part of the proposed scheme.

A sustainable transport contribution of £359,800 would go towards work in the area of the development.

People moving in would have one or more years’ free or heavily subsidised tickets or memberships for public and shared transport services.

These include buses and train services, Brighton and Hove Bike Share, Enterprise Car Club and formal cyclist training on request.

The £120million affordable homes scheme was first announced in autumn 2016, and the first three sites, Coldean, Whitehawk and Clarendon Place in Portslade, announced in September 2017.

The Whitehawk site was dropped in January this year. Plans for the Clarendon Place have also attracted opposition, for not including enough parking.