Hands Off Gretel get the crowd boiling in Brighton 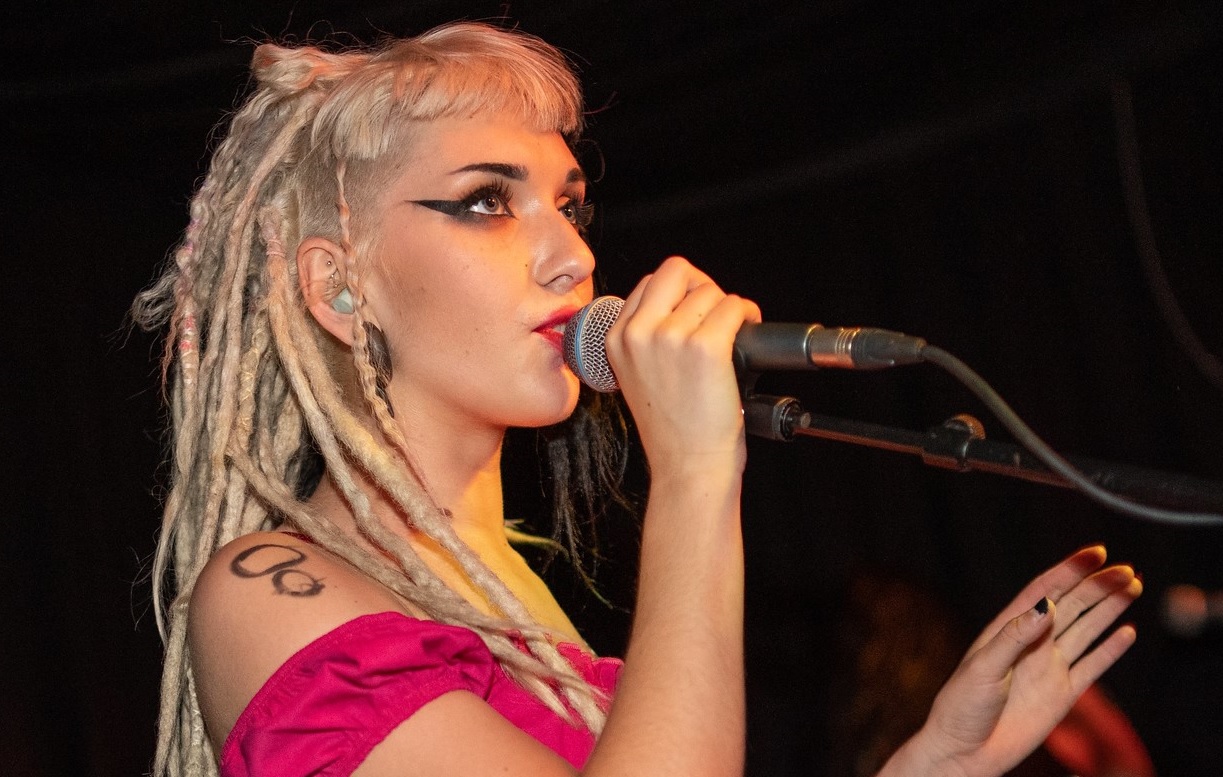 It’s been a beautiful sun-baked day in Brighton with the beach seeing all the action, but now it’s the turn of The Prince Albert as the ongoing Hands Off Gretel tour makes its way to the city.

Hands Off Gretel are a visually stunning band and a photographers dream, and so it comes as no surprise to learn that they have already performed at several major festivals including Download, Isle of Wight, Rebellion main stage, Camden Rocks Festival, Great British Alternative Festival and headlined Loud Women Festival in London. The band has also toured Germany and the Netherlands. 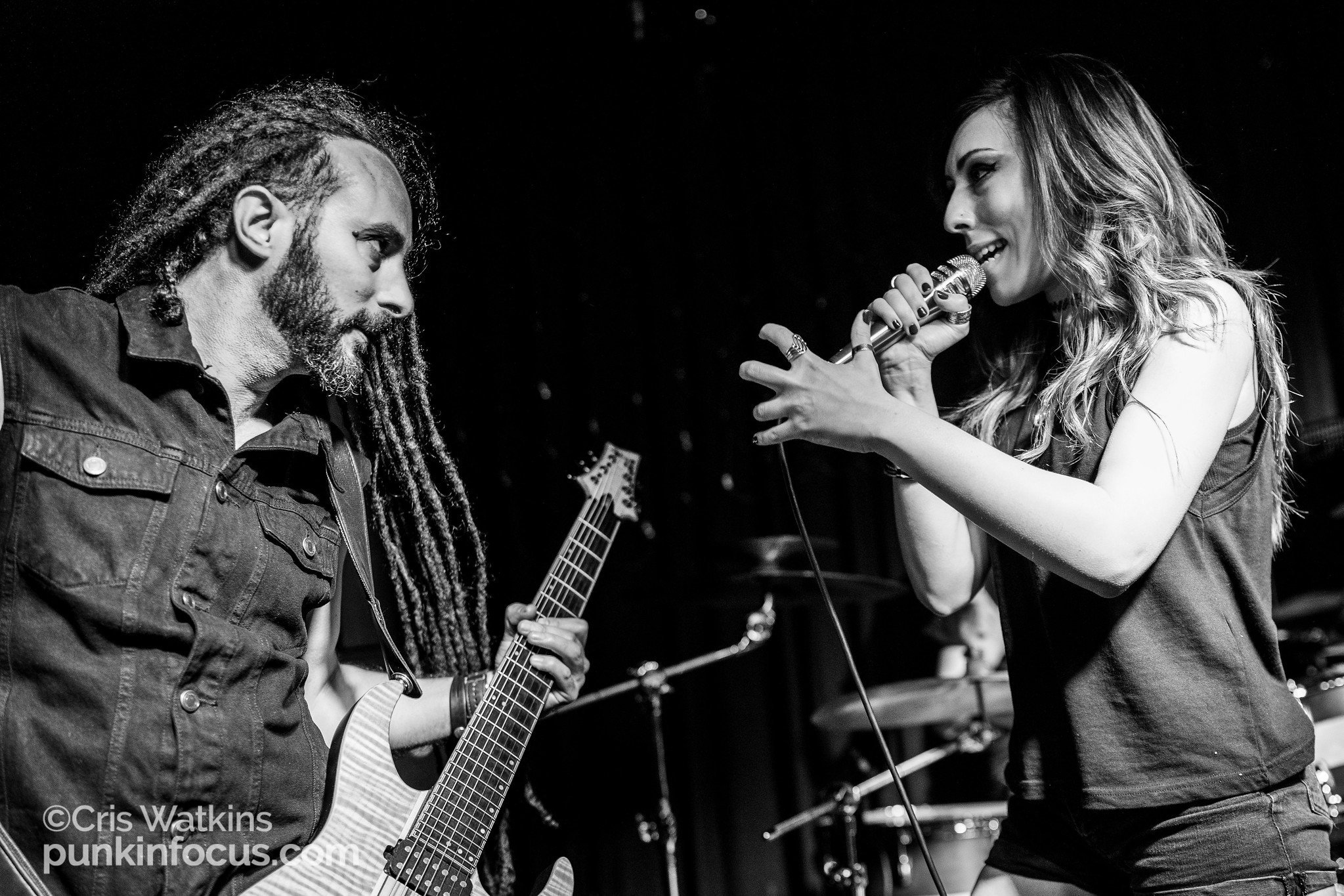 First to hit the stage tonight though is ‘Finding Kate‘ which is Kate Pavli supported by a full band, apparently, she also does solo shows. The Albert is already hot, sweaty and looking full to capacity, which is fantastic to witness this so early in the night and to see a crowd get behind the support acts, rather than making an entrance just before the main band hits the stage. There is a reason though and that is it seems everyone here but myself knows just how damn good ‘Finding Kate’ is/are.

They get my attention straight off the bat with the superb opening duo of ‘Drowning’ and ‘White Lies’ both from the 2016 album ‘If I Fall’. With the searing yet passionate vocals of Kate and the incredible guitar work from Nanneq, who has the most unbelievable head of dreads that flail and fall as though he himself is enveloped in an elaborate web. This is all bound together by an immensely powerful backbeat of bass and drums.

Highlights for this first timer though had to be ‘Inside Out’ and the slow builder ‘Get Over You’ which intensifies into a colossal dark anthem, the pain and passion bleeding out through Kate’s spellbinding vocals. The set closes with ‘Gone’ which again takes us on an emo-rock rollercoaster that you just don’t want to get off. Finding Kate are an absolute live treat, they’ve got the looks the sound and the songs, what a start to the night! 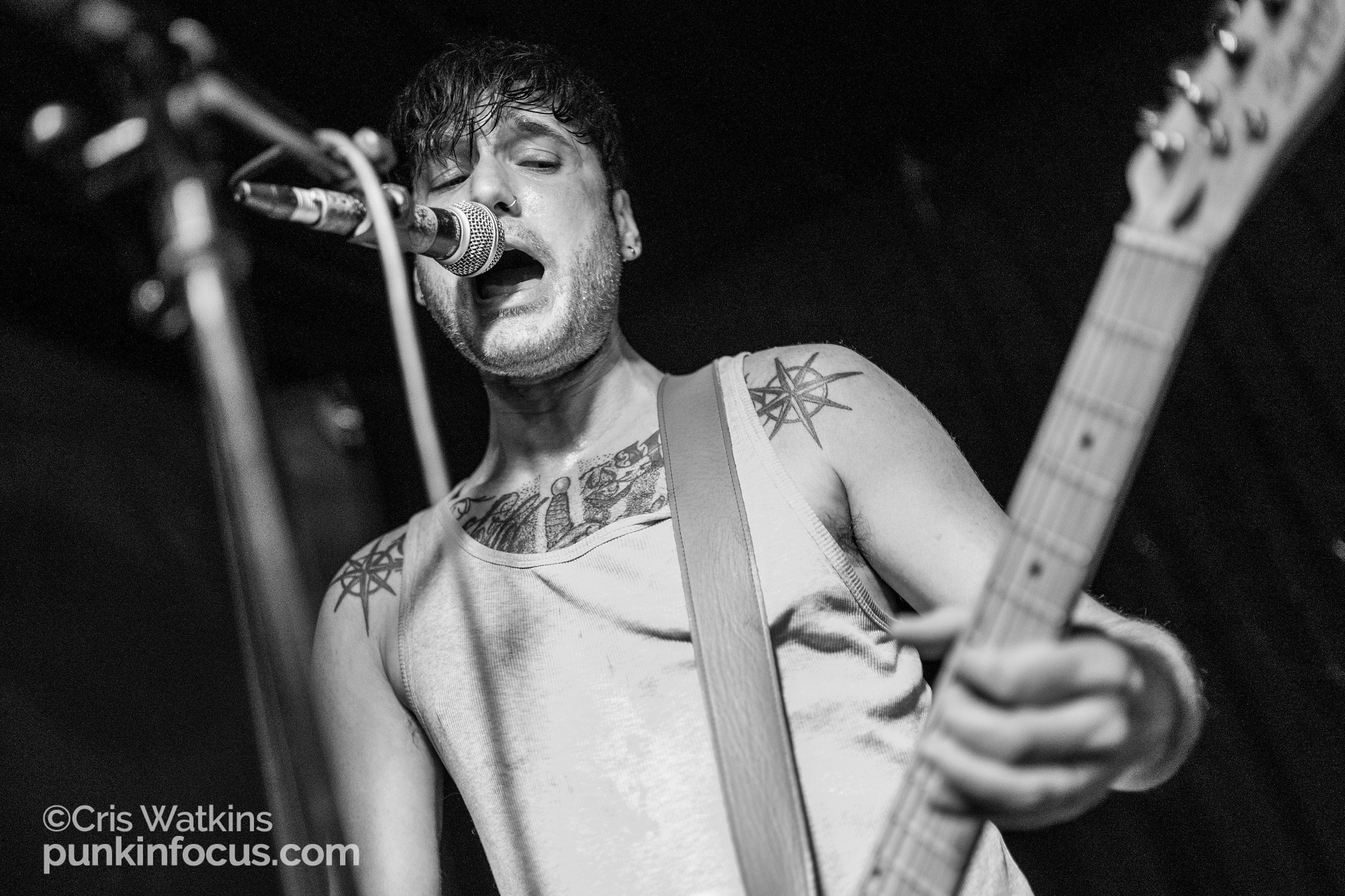 Next up is Brighton two piece ‘SONS‘ which comprises of brother Lee and Nick Meldrum. Again I feel as if I’ve had my head buried in the sand, as I’ve never heard these guys before. The first thing that comes to my mind when I hear ‘2 piece’ is Slaves, who incidentally I saw in this venue back in 2012 when they supported Wonk Unit and as on that night I’m blown away again!

SONS are angry hard-hitting punk rock, fuzzed up guitar, pounding rhythms and big fat dirty riffs that Angus Young would have been proud to pen. They remind me of ‘Half Nelson’ era Group Dogdrill takings a trip with The Virginmarys. SONS aren’t just noise, they’ve got some sweet harmonies and catchy sing-along choruses. As for standout tracks, the whole set was a blast but opener ‘Natural’, the impressive ‘Rise’ and the absolute punk rocker ‘P.U.N.K’ which closed the set, all fists, spit and rage. SONS are heading back to The Albert on the 11th September and I for one will be here. You can purchase your tickets HERE. 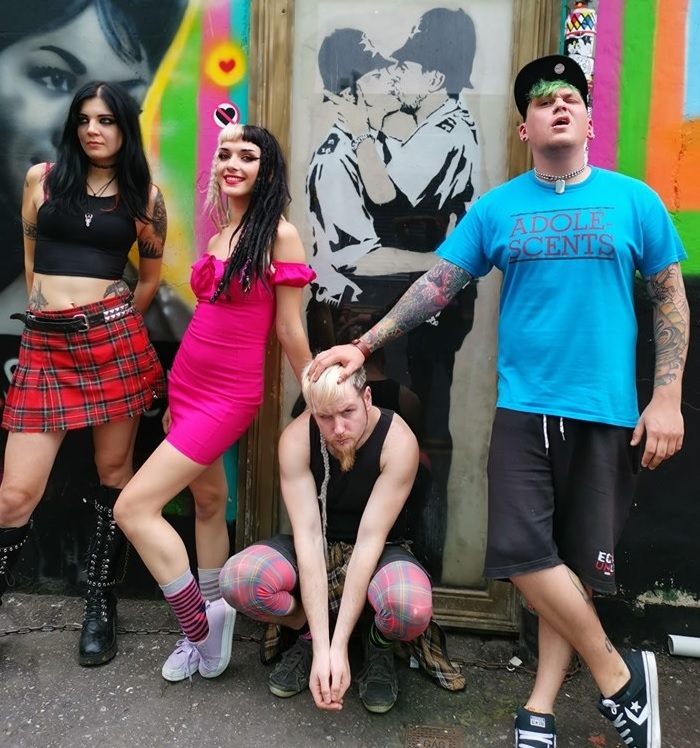 Hands Off Gretel outside The Prince Albert 06.07.19

Hailing from Sheffield, England, Hands Off Gretel have been burning a trail so bright the length and breadth of the UK this year. This already their third trip down to sunny Brighton, previously performing at Patterns in 2018 and The Hope and Ruin earlier this year as part of ‘This Feeling’ – read our review HERE.

Since the release of their exciting 12 track second album, ‘I Want the World’ via the band’s own label Puke Pop Records, there seems to be a fire burning in the belly of these four, their lyricism and musicianship belie their age and I believe venues this size are soon to be a thing of the past for HOG, as I can only see their fan-base growing and growing.

The venue is now like a sauna with sweat pouring off sweat and it’s just about to get even hotter as Hands Off Gretel launch into ‘I Want The World’ with its unmistakable opening riff which has Guitarist Sean McAvinue pirouetting like a madman. HOG are a pure joy to catch live, Lauren Tate already knows how to work a crowd and she has a voice that can go from sweet to scream on the flick of a switch. Joined by the aforementioned Sean on guitar, the incredibly talented Becky Baldwin on bass and the extremely hard working Sam Hobbins on drums these are a band surely destined for much bigger things.

Tonight’s set is taken mainly from the new album with many of the tracks getting an airing ‘Alien’, a wicked blast through ‘S.A.S.S’, ‘Big Boy’ but for me, though the two slower numbers, the heart-achingly beautiful ‘It’s My Fault’ and latest video ‘Freaks Like Us’ show just what a talent these guys possess and showcase the true power of Laurens’ voice. The set also brings out the ever popular ‘One Eyed Girl’ which got the crowd moving and one track I hadn’t heard before, the hardcore punk-rocking ‘She Thinks She’s Punk Rock ‘N’ Roll’ which I believe is coming up on a soon to be released EP.

All good things have to come to an end and ‘Kiss Me Girl’ closes the show in style and style is one thing Hands Off Gretel have in abundance.
Again it’s another top-notch night for bands in Brighton and The Prince Albert plays an admiral host and not forgetting the wonderful guys of Angel Promotions for putting on the show.

The Hands Off Gretel setlist reads:

For more information and Hands Off Gretel merch, click HERE.

Check out our exciting Hands Off Gretel photo album HERE. 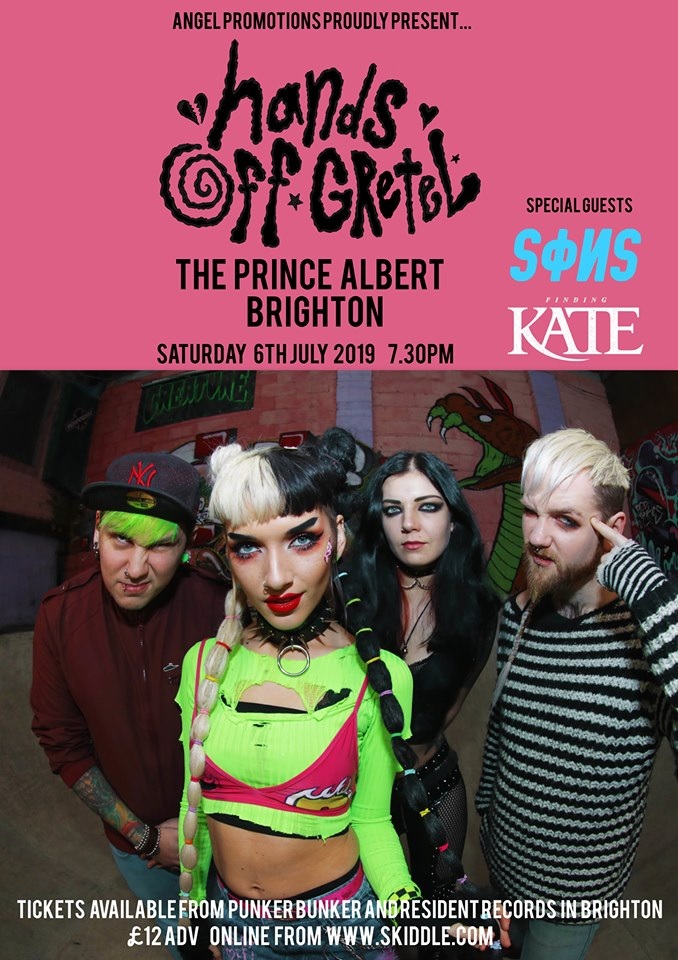 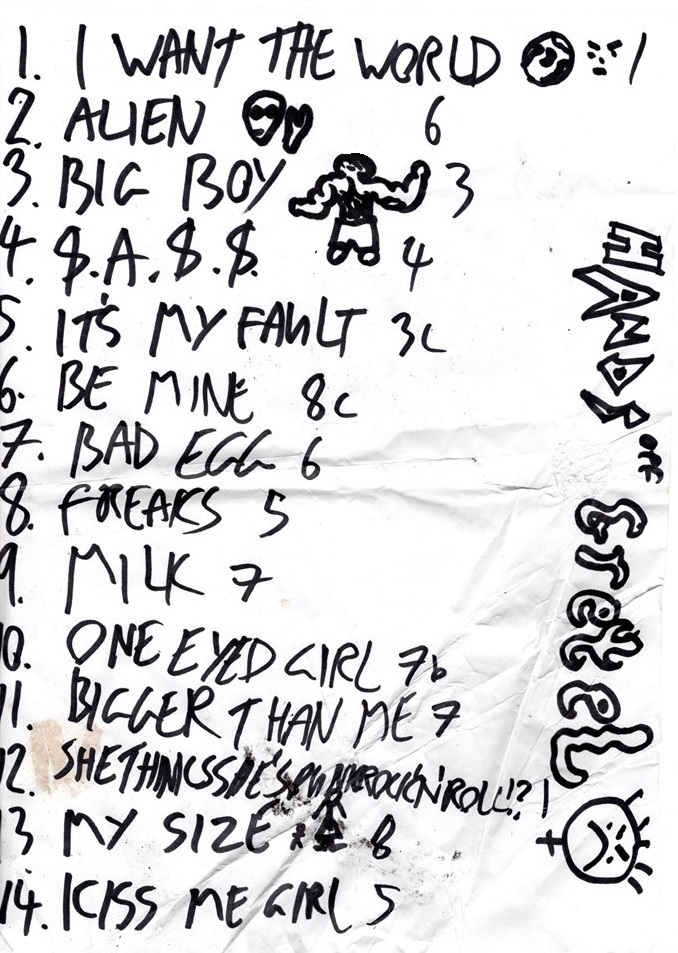