A £260 milion scheme to build more than 800 homes on a rundown trading estate has been turned down by Brighton and Hove City Council.

The proposal included 581 flats, ten live/work units and 260 retirement flats on the Sackville Trading Estate in Hove, as well as shops and offices.

The council’s Planning Committee ignored an official recommendation to approve the scheme which included a series of tower blocks up to 15 storeys high alongside Sackville Road.

Frith Road resident Clare Bennett spoke on behalf of her neighbours in the Artists’ Corner area to the west of Sackville Road.

Neighbours sent in almost 200 objections, with parking pressure among their objections.

She said: “We do not feel we can accommodate any further visitors resulting from this development.

“There is a busy junction and there is only one way in and one way out which is not sufficient.”

Save Hove campaigner Valerie Paynter spoke on behalf of the freeholder of a garage in Newtown Road which backs on to the site. He was concerned that his new neighbours would complain about noise.

She said that an application at the corner of Newtown Road and Goldstone Lane was recommended for refusal because of “acquired noise rights” for the proposed residents.

She said: “That City Plan employment-led site gave way to a block of flats, a terrace of six houses and a tiny office.

“The car dealership next door has gone and an application in for two huge blocks of flats will end that City Plan designated site for employment-led development if granted.”

The Labour councillor said: “Sackville Road is one of the busiest in Hove. This will have an impact on the surrounding area.

“There will be a great deal of chaos there as there was last year when the traffic lights were down.” 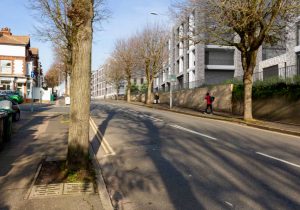 Ten per cent or 58 of the 581 flats would be available at “affordable” rents although the independent District Valuer Service said that the scheme might not be viable if it included affordable housing.

Yet, Councillor Bagaeen said, the build-to-rent market was booming.

He also said that he was worried about waste management, saying that Cityclean – the council’s rubbish and recycling service – already had problems reaching some homes to collect people’s rubbish.

Labour councillor Gill Williams commended developer Moda Living for paying the Brighton and Hove living wage but asked if people on that wage could afford homes there.

Moda director James Blakey said yes, adding that “per bedroom rates” worked out at £354 a month and the company did not ask for deposit.

Rent would include access to the gym, internet and reduced electricity costs, he told the Planning Committee. 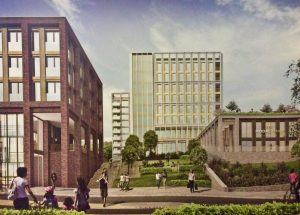 Former Labour council leader Daniel Yates asked how much it would cost for a unit rather than per bedroom.

Councillor Yates said that people would have to sleep three to a bed to afford it – and with 25 per cent off it would still not be affordable.

He said: “I do not think we are doing right for Brighton and Hove to have to use up this one significant site and not deliver a single piece of genuinely affordable accommodation.”

She said: “Let’s try and do something with this site and knock it back. Let’s get something 100 per cent renewable and have something we can be proud of.

“This could be anywhere. We don’t want it in Brighton.”

Conservative councillor Joe Miller asked for the affordable housing to be protected by a covenant to keep it “in perpetuity” and voted for the scheme.

But a majority of the committee voted against granting planning permission for the application.

It was refused on the grounds that too many of the flats would be studio flats, the height and massing of the tower blocks would harm the heritage of the area, the lack of amenity space and the lack of daylight in the buildings for older people and the lack of work space.