A night of ‘Moo-ving Targets’ 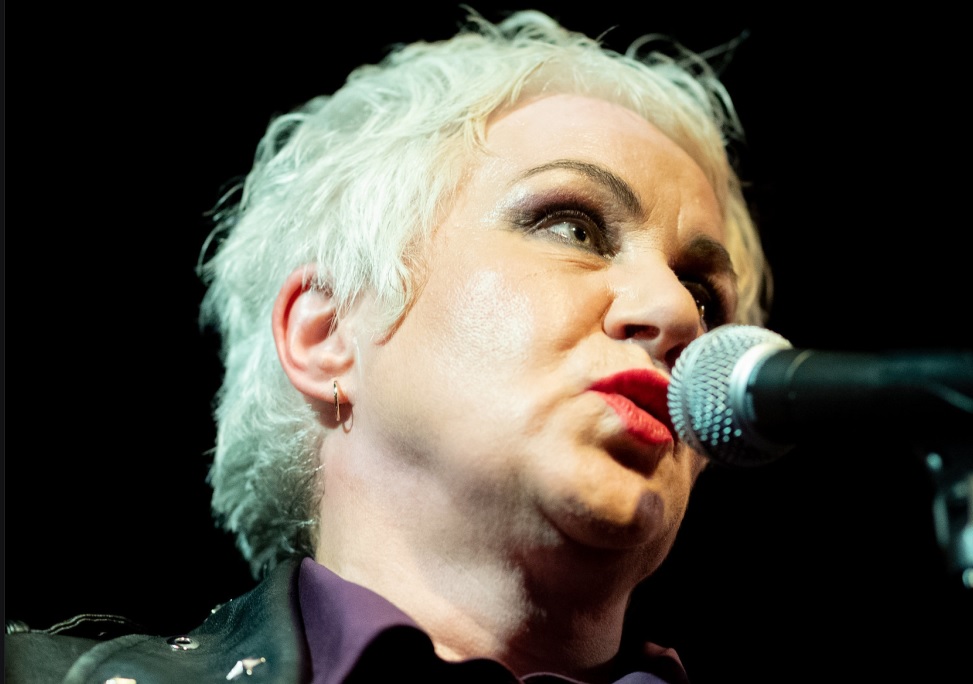 Sorry, but I just couldn’t resist using this headline and all will become clear when you read on. I might be a tad delirious as yesterday I witnessed no less than 13 bands performing live in Brighton and Lewes and not had much sleep since as I’m still buzzing from a truly memorable day.

It started at Patterns in Brighton, where I managed to grab no less than 10 of the 14 bands that Jim from promoters Hidden Herd had assembled in a mini style version of The Great Escape new music festival. Read our review HERE.

Then I whizzed from Brighton seafront to the capital of East Sussex (to The Con Club to be precise) in order to catch a trio of calibre punk bands. Bands that span the punk spectrum in music and time. Headliners were County Durham’s finest punk stalwarts Penetration, who originally formed in the early days in 1976 and are famously fronted by Pauline Murray. They were supported by the sons of Southsea The Dinz and Brighton’s finest all-girl punk outfit PussyLiquor.

On arrival I was warmly greeted by the promoters of this evening shenanigans Fozzy and Jane from The Big Blue Shed, who have virtually single handedly with the assistance of Paddy from The Con Club, firmly put this compact Lewes venue on the radar of many punk and associated artists up and down the length and breadth of the country.

Mates met, beers purchased, banter exchanged and terrific punk tunes aplenty from DJ Gremlin and we were off! 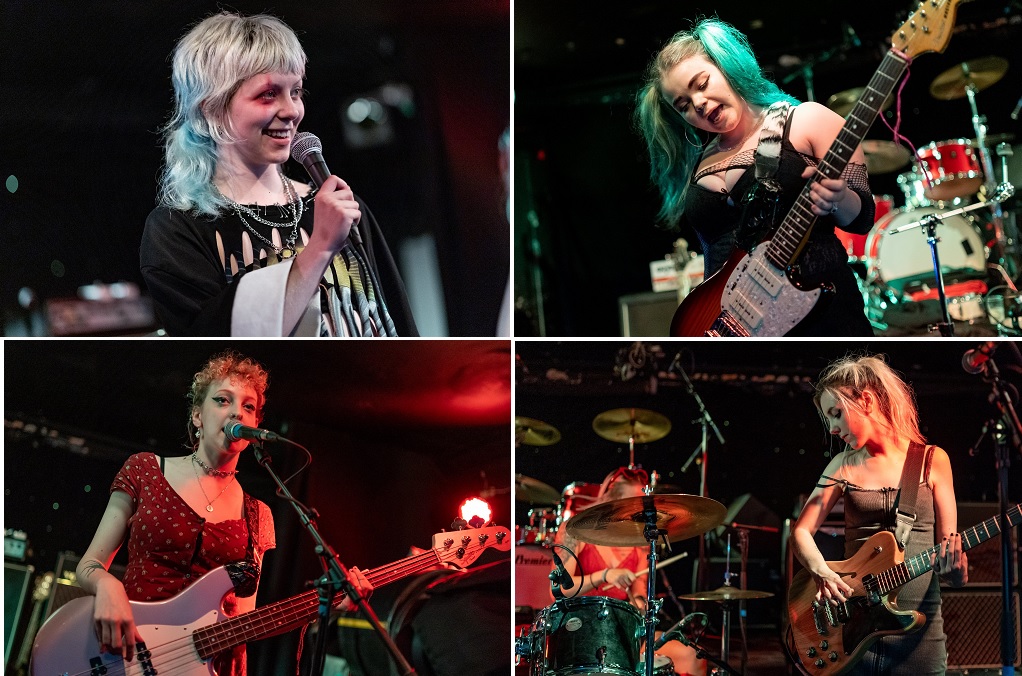 PussyLiquor are the perfect band to get the show on the road. The all-girl quintet has the same philosophy as many of the faithful gathered here tonight, which included ‘The Queen Of Punk – Jordan’. It was therefore a pleasure in being able to introduce PussyLiquor’s vocalist Ari Black and ‘Da’ to Jordan, who certainly hit it off as Jordan added Sunday 27th October into her hectic diary as that’s when PussyLiquor will be performing in Brighton as support to the former members of The Fall, Brix & The Extricated down at Patterns, where I had just rushed from. This is certainly going to be an awesome night. We reviewed their previous Brighton concert, which you can enjoy HERE. For tickets for the forthcoming event, click HERE.

Every once in a while you get a girl band that arrives on the scene that you seriously cannot ignore, as they push against the boundaries of what people perceive a girl band should look, sound and behave like. We are talking about such luminaries as The Slits and L7, and now you can add Brighton’s very own PussyLiquor to that list.

The Pussyliquor personnel proudly boasts Ari Black (vocals), Victoria Lewis Piper (drums), Hannah Villanueva (guitar), Lucy Priddle (guitar) and Tallulah Turner-Fray (bass). They met up nearly three years ago via their degree courses with ‘Access To Music Brighton’ (which used to be based in Melbourne Street) and bonded over a passion for hard-core music and even harder core feminist beliefs. With an average age of around twenty two years old – they have the no-nonsense and in your face approach that recalls the spirit and energy of Cosey Fanni Tutti and the aforementioned L7 and The Slits. Together they’re fighting a cause and celebrating what it means to be a woman.

This evening they performed in their own inimitable style (but was a tad heavier than previous encounters) and I could see from looking around the crowd, that quite a number were experiencing the joys of the band for the very first time and were enjoying what they were witnessing. Sadly a shortened set from previous concerts in order to “get out get out get out” in time for the other bands, but I’m sure looking forward to seeing them again in October. 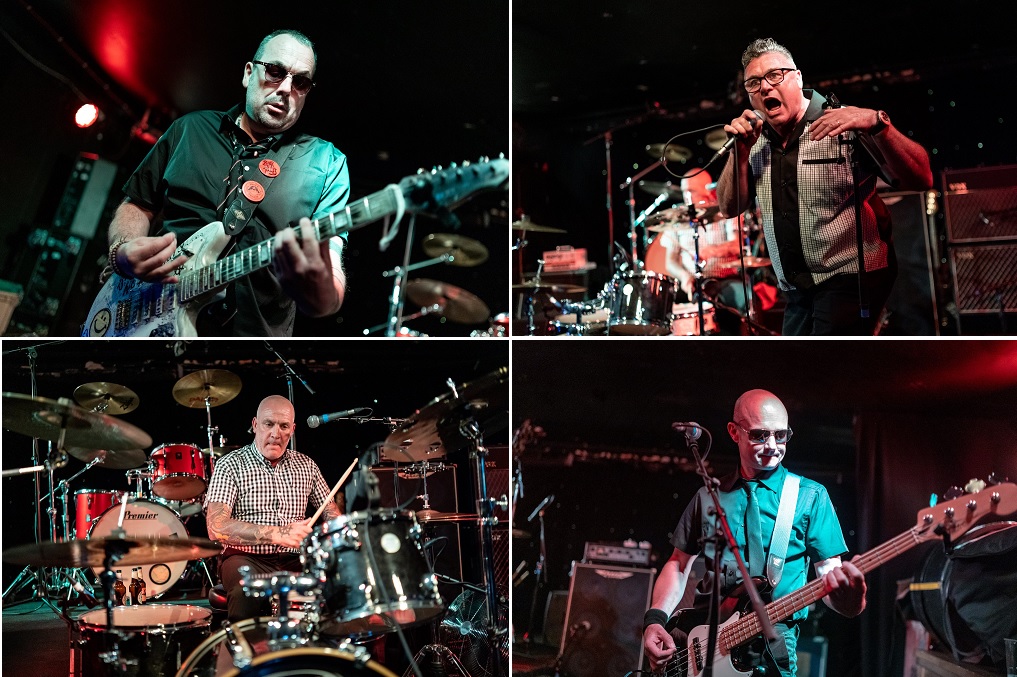 Next up were The Dinz who are Mark (vocals), Turkee (drums), Steve (bass), Rob (guitar). These Pompey punks were back at The Con Club, having played there just last month with Subhumans and prior to that with the UK Subs at the same venue, so they are no strangers to this part of the world.

You have to admire these gents who despite the major setback of losing their previous guitarist to cancer, are certainly battling away on the local punk scene. The guys have just released their 12” yellow vinyl album which is crammed full of their traditional catchy punk sounds. It also came with a singalong art booklet and I do believe has already sold out. I feel another trip to the pressing plant coming on by Trash Wax Records who have released it, especially as The Dinz are performing an album launch party at the Milton Arms in Portsmouth on Friday 19th July.

It’s reasonably feasible to observe that The Dinz look like Joe Public, however the music they play is more akin to something like Sham 69 and thus a classic case of not judging a book by its cover. Best track tonight was ‘Terror Attack’.

More info on The Dinz HERE. 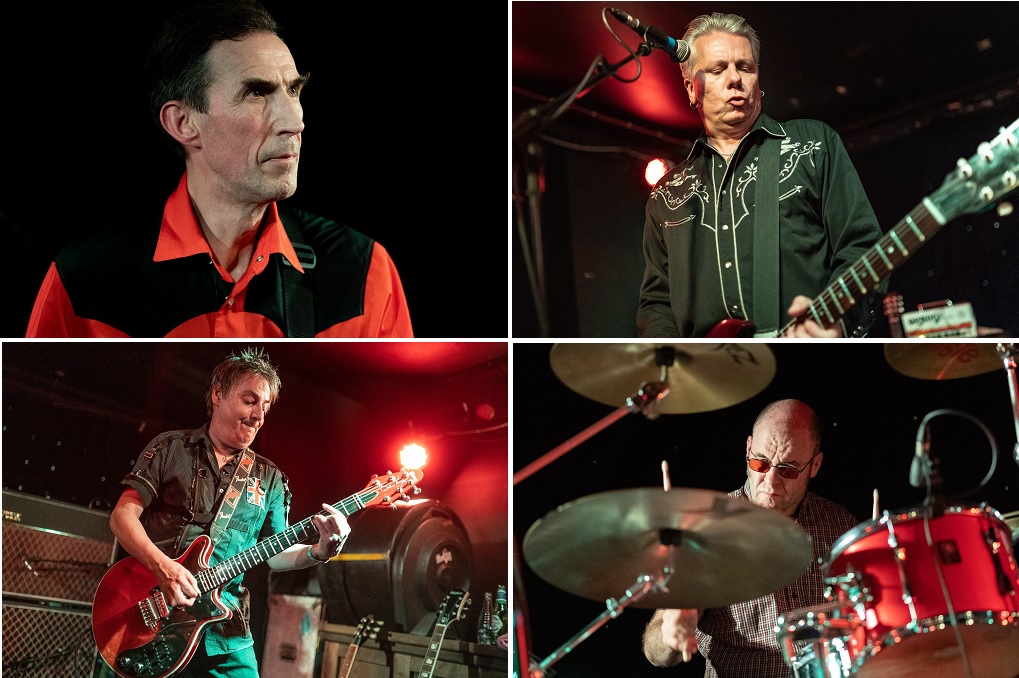 Finally it was time for my 13th act of the whole day. This was Penetration’s second live gig in Lewes (pronounced ‘Loowiss’ as opposed to ‘Looz’ – for Pauline’s benefit), having initially performed there Friday 27th October 2017. We were in attendance – enjoy our report HERE.

Penetration initially formed back in the heady days of 1976 and had a reasonable amount of success. Releasing two chart-denting albums in 1978 and 1979, before calling it a day a few months later. After a 21 year hiatus, the members reconvened.

Their two albums were ‘Coming Up For Air’ (1979) and prior to that ‘Moving Targets’ the previous year. Right then, it’s here that I can return to the title of this article “A night of ‘Moo-ving Targets’”, as not only is it a play on the title of the debut album, but after tonight’s concert, my celebrity friend and I were driving home down a dark country lane and much to our surprise, we had to grind to an immediate halt, as there right in front of us and blocking the road was a whole herd of cows and bulls. Clearly they weren’t being moved from one farmers field to another at this time of night as the farmer was nowhere to be seen. Not possessing a stick to guide them back where they should have been, which to be honest was unclear, the only resort left to us was to call out the boys in blue for a spot of rounding up! Well that certainly doesn’t happen everyday in Sussex! 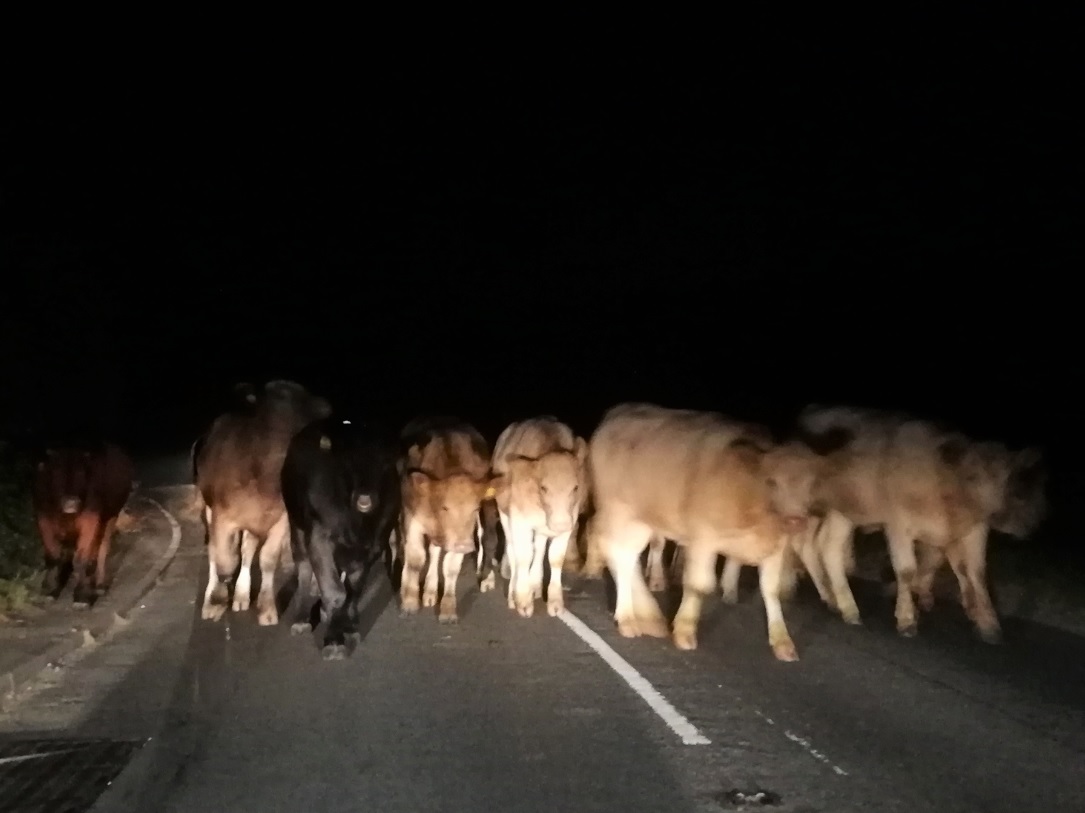 Anyway, ‘moo-ving’ back to Penetration.

Penetration’s initial lineup was lead singer Pauline Murray, Robert Blamire (bass), Gary Smallman (drums) and Gary Chaplin (guitar). Chaplin left in March 1978 being replaced with Neale Floyd, with second guitarist Fred Purser joining in July. The band dissolved in late 1979. The founding fathers (and mother) got together in 2001 and played a few rehearsals, with some still in the zone and some not quite so. Thus original members Murray, Blamire and Smallman, carried on flying the banner now accompanied by Steve Wallace and Paul Harvey who were drafted in as new guitarists. After some considerable time, Penetration finally decided to release their third album, which saw the light of day in 2015. It’s called ‘Resolution’ and a true return to form it is indeed. Those appearing on this ‘latest’ album being Murray, Blamire, Harvey, Purser along with the legendary Buzzcocks and Invisible Girls drummer John Maher (pronounced ‘Marr’ as in Johnny Marr – but we won’t go there!).

It seems that sometimes ‘miles do matter’ as drummer Maher hasn’t been present at either of the Lewes concerts, preferring to chill out at home near another Lewis on the Scottish Hebridean island of Harris, where he is making a true name for himself in the self-taught field of professional photography and specialist VW Beetle conversions. Maher did pleasingly participate in the recent Royal Albert Hall memorial concert to Buzzcocks frontman Pete Shelley, which took place on 21st June – enjoy the fabulous photos from that very special night that included Buzzcocks, Penetration, Skids and many guests HERE.

Tonight’s Penetration set was vastly different from their previous one at the same venue and all for the better for it. Other than the omission of their Buzzcocks cover ‘I Don’t Mind’, this evening’s gig was an overall better affair. Last time they were enjoyable, but for gig two, they were more tighter and dare I say professional. Maybe the recent Royal Albert Hall performance has upped their game. I am not alone in this assumption either.

A Penetration concert has become a meeting place for the loyal to gather from far and wide. An instance of this being my mate paying homage to the band in a special 330 mile round trip.

I noted that Pauline’s raised footwear is possibly single-handedly endeavouring to bring glam rock back to the UK concert stages, although it was difficult to clamber back down onto the stage from the drummers position, where she had inadvertently taken up residence for longer than desired, much to the amusement of the punters. But hey, it didn’t matter as we were all friends.

I have to highlight the fact that no less than five songs were performed from the latest ‘Resolution’ album and not only did they blend in with the punk classics, but are actually arguably in the main stronger compositions. Penetration’s fifteen tune setlist can be viewed below.

Looking forward to their return to these parts in the near future. In the meantime CD of the new album that I got signed by all of the band members will have to suffice.

For more information on the band visit HERE. 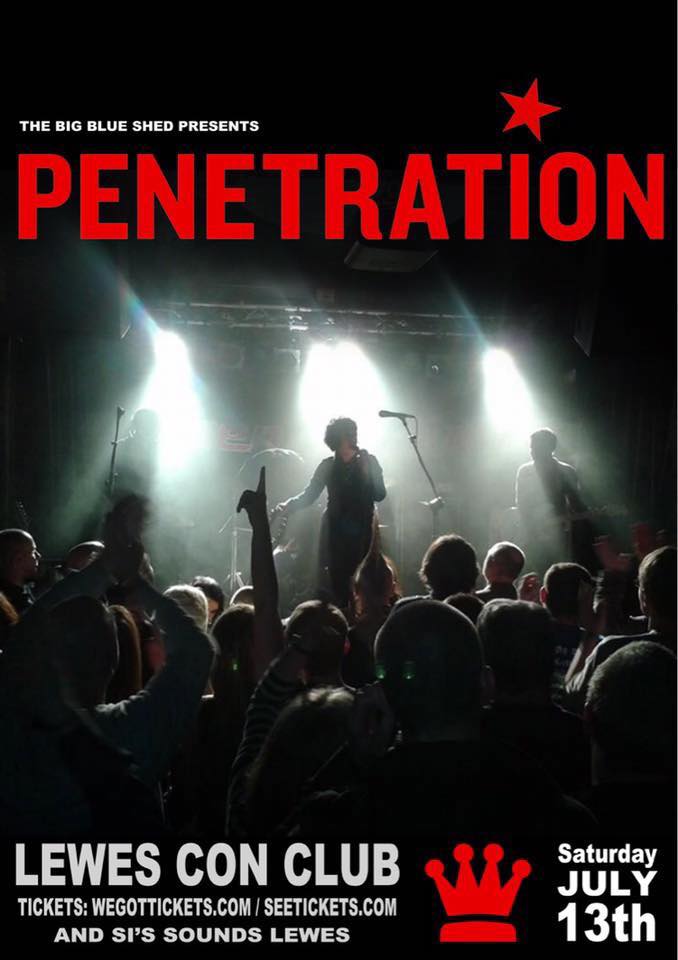 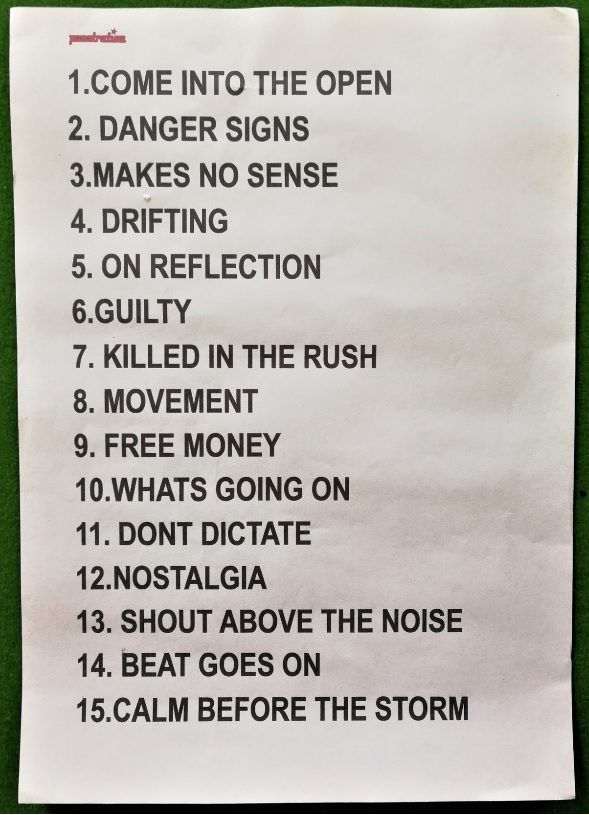 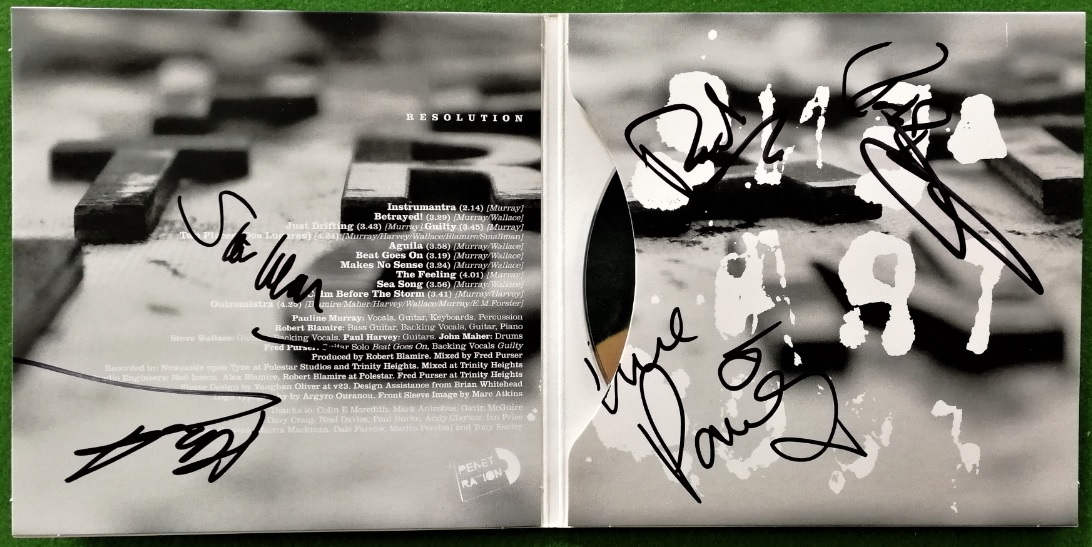