Man stabbed in neck in unprovoked attack in Brighton pub

A man needed stitches for a stab wound to his neck after being glassed in an unprovoked attack in a Brighton pub late last night (Thursday 18 July). 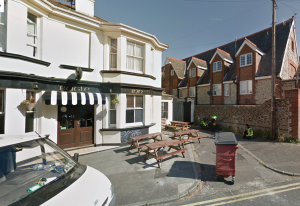 The Bugle Inn in Brighton

He was stabbed in the neck with a broken glass at the Bugle Inn, in St Martin’s Street, Brighton, shortly after 11pm.

Medics at the Royal Sussex County Hospital treated the victim while Sussex Police issued an appeal to try to trace three men who were suspected of being involved in the attack.

The force said this morning: “A man was wounded in the neck in an apparently unprovoked attack in a Brighton pub.

“The 47-year-old victim was socialising in the Bugle in St Martin’s Street around 11.10pm on Thursday (18 July) when he was punched and then stabbed in the neck with a broken glass.

“Two further suspects then joined in the affray that followed.

“He was treated at the Royal Sussex County Hospital in Brighton where the injury required a number of stitches.

“The initial aggressor was white, late forties, 6ft, of slim build, brown eyes, with thinning brown hair shaved at the sides and with a topknot hairstyle.

“He was wearing all black tracksuit top and bottoms, t-shirt and trainers. He may be called Dan.

“Police are also seeking to identify the other two men involved.

“The first was white, in his fifties, 5ft 10in, of stocky build with a beer belly, short grey hair and wearing shorts, t-shirt and tracksuit.

“The second was white, in his twenties, 6ft, of medium build with short dark brown hair and facial hair. He was wearing grey tracksuit bottoms and a high-visibility vest.

“All three men are believed to be builders or of similar employment.

“Anyone who witnessed the incident or who recognises the descriptions is asked to report online or call 101 quoting serial 1784 of 18/07.”

Stand up for a safer, kinder, welcoming Brighton and Hove