A former Brighton police officer has denied breaching professional standards and discreditable conduct in the way that he dealt with Portslade murder victim Shana Grice before her death.

PC Trevor Godfrey was accused of treating Miss Grice as the wrongdoer and her stalker Michael Lane as the victim – even though Lane admitted assaulting Miss Grice and stalking behaviour.

The officer had been assigned to investigate a complaint that Lane had assaulted Miss Grice in March 2016 and he was even concerned that Lane might be stalking her.

But when he found out that Miss Grice had concealed her affair with Lane from him, he felt that she had lost her credibility as a witness.

He recommended that no further action be taken against Lane and had strong words of advice for Miss Grice.

She later received a fixed penalty notice fine of £90 for wasting police time.

Mr Godfrey said that she could have been arrested for perverting the course of justice and, if convicted, would have faced a prison sentence.

This was because she had signed a statement – made in front of her “official boyfriend” – that was untrue.

Five months later, in August 2016, Lane murdered Miss Grice, 19, having pursued a sustained campaign of stalking and harassment against her after their brief relationship.

The judge who sentenced Lane to life in prison said that Sussex Police had missed opportunities to deal with Lane’s obsessive behaviour before he killed her.

Mr Justice Green said: “There was seemingly no appreciation on the part of those investigating that a young woman in a sexual relationship with a man could at one and the same time be vulnerable and at risk of serious harm.

“The police jumped to conclusions and Shana was stereotyped.” 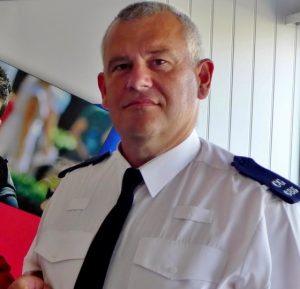 But Mr Godfrey’s barrister Mark Aldred told a misconduct hearing in Lewes today (Monday 29 July) that the officer had done everything expected of him and more.

He had not been the decision-maker when it came to the outcome of the case and had offered Miss Grice the privacy that would have given her a better chance of making a truthful statement.

The officer felt, though, that the Portslade teenager had put on some kind of show for her boyfriend’s family.

PC Godfrey retired from Sussex Police after almost 28 years at the end of 2017.

He appeared before a disciplinary hearing to answer charges of gross misconduct for failing adequately to investigate the claims of harassment and stalking.

He is also accused of failing to comply with Sussex Police policies on domestic abuse and failing to give her safety advice and carry out a risk assessment.

He denies the charges and the hearing continues.