A coffee shop owner has applied for a temporary licence to sell cocktails during Brighton Pride.

His application will be decided by a Brighton and Hove City Council licensing panel at Hove Town Hall on Friday (2 August).

This year he wants to sell cocktails from his shop which is opposite The Crescent pub.

He said: “There would be no issues with stuff unsecured outside.

“All the issues that were raised last year have been addressed.”

The pub is hosting its own street party, closing the road outside Mr Ackerley’s business, although his application is independent of the street party.

But Sussex Police has objected, with concerns that the business would be outside the road closure, but Mr Ackerley said that his shop was in Powys Road, which would be closed.

The force said that the premises did not have an existing licence to sell alcohol although Mr Ackerley did have a personal licence.

Mr Ackerly said: “I don’t really understand why it’s so objectionable. There is a suspended licence and I have a personal licence.”

Inspector Robert Lovell wrote that he was also concerned that the café was not part of the approved street party and was next to an off-licence.

He said that the force objected to temporary events involving alcohol during the Pride weekend if the premises did not ordinarily have a licence.

This was because it made it harder to keep people safe and prevent crime and anti-social behaviour. 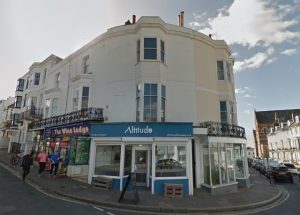 He added: “During the times being asked for, there is already an organised street party within a secure area which this premises is not within.

“They state that all entertainment will be provided by the organisers of this approved street party.

“However, the café is not part of that event, within its approved footprint or part of the safe guarding that has been put in place by the organiser. ”

Hundreds of thousands of people are expected to be in the centre of Brighton over the Pride weekend.

Pride bosses and police and licensing officials have worked together to manage the number of temporary events at which drink coud be sold.

Mr Ackerley’s application was the only one to go before a licensing panel this year.

The panel on Friday is due to start at 10am with Councillor Jackie O’Quinn chairing the proceedings.

She is due to be  joined at Hove Town Hall by councillors Lee Wares and Theresa Fowler.