A long-established and well-respected event organiser has scrapped plans to hold a club night in Hove during Pride after Sussex Police objected.

The organisers of the Duckie club night said: “Duckie at Brighton Pride next Saturday has been cancelled.

“We are really sorry to bring you this dreadful news. Everyone was looking forward to it.

“All ticket holders have been refunded direct to the card that they paid with.”

Duckie club nights have been running weekly at the Vauxhall Tavern in London for the past 24 years and have been a regular feature of Brighton Pride for some years too.

But the usual Duckie venue in Brighton – the Corn Exchange – is undergoing a refurbishment and the promoters booked the King Alfred Ballroom on Hove seafront.

The venue is licensed until 1am but Duckie gave notice to Brighton and Hove City Council that it wanted to stay open until 2am.

This prompted an objection from Sussex Police but – given the limited time for the council to arrange a licensing panel – the organisers cancelled their plans.

They said: “The venue (King Alfred’s Ballroom) pulled the plug after they received a warning from Brighton and Hove police.

“The local old bill have decided they don’t want any Brighton Pride party-type events to happen outside of the town centre.

“There is a massive street party in town attracting tens of thousands of extra (very drunk) revellers that the police have to manage.

“As a result, for the first year ever, they have issued a blanket ban on any dos outside of the central area.

“They are concerned about 400 punters leaving the venue at 2am, with cabs being a bit thin on the ground and any potential disturbance they might cause on their way home.

“Duckie didn’t predict the police’s actions and neither did the venue. In retrospect perhaps we should have done and spoken to the police months ago, in our early planning. But we didn’t. We just booked the venue in good faith like we always do. 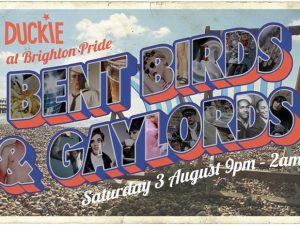 “It’s a very provincial issue. As London club runners we haven’t come across this sort of heavy-handed, fearful and over-managing of gays and lesbos walking the streets late at night.

“Duckie have decided not to appeal the issue with the police or the venue as we don’t think we would win the battle.

“Swapping to a different venue is not an option as there is nowhere suitable and available. We are hugely disappointed.

“Sorry. In our 24 years Duckie have only cancelled a handful of events and it’s always shameful to do it. We are so sorry to let you guys down. We’ll be back!”

Sussex Police said that it was concerned about people leaving the venue at 2am when there was limited public transport and that the proposed closing time would coincide with a high tide.

Inspector Robert Lovell said: “This event is on the busiest weekend of the year in the city and this is not a central location.

“With just four security we are unsure how they would cope with any issues should they occur without needing assistance from already stretched blue light services.”

But the Labour MP for Brighton Kemptown, Lloyd Russell-Moyle, has written to the police commander for Brighton and Hove.

After ticket-holders expressed their dismay on Facebook, Mr Russell-Moyle said that the situation was “outrageous”.

He said: “I am very sorry about this. I am very concerned about the licensing decision here – and this is not the first time the police have represented against LGBT venues (there was one where the police tried to shut one of our oldest venues down – the Bulldog – and the council even had to take the police to court).

“I have written an urgent email to the district commander and asked to discuss this matter as an issue of priority.

“It might be too late for this year but this is just unacceptable.”

After Duckie posted about ticket refunds, one Facebook user Gavin Dee wrote: “It’s a hugely disappointing casualty of what Brighton Pride has become in recent years.

“Most gay and lesbian locals I know are avoiding the park and Kemp Town lock-in.

“So many of us were so looking forward to Duckie for a breath of authenticity and of what Pride used to represent.”

Customers praised the organisers for being open about the cancellation and refunding their tickets quickly.

The club night was one of 45 Pride-related events where organisers notified the council of their plans with a “temporary event notice” or TEN.

Most of them are going ahead after organisers worked the Brighton Pride Community Interest Company (CIC) which organises the parade, festival and Village Street Party.

About a quarter have been withdrawn after consultation with the council and police.

Just one is to be decided by a council licensing panel which is scheduled to take pace on Friday (2 August).

“All venues co-operate and know and understand the system that we work to so that notices can be quickly processed once submitted.”

Labour councillor Jackie O’Quinn, who chairs the council’s Licensing Committee, said: “The police receive a lot of TEN applications for Pride but they seem to have worked out an excellent system in conjunction with the Pride organisers and the Licensing Department, particularly regarding the Pride Party in St James’s Street.

“We have had some very unusual requests for TENs in previous years. Last year it was the one for cocktails served from a telephone kiosk in central Brighton.

“We don’t see the TEN applications for St James’s Street from unlicensed premises that we used to. That seems to be managed exceptionally well nowadays.”

Hundreds of thousands of people are expected to come to Brighton for Pride this weekend.

Despite the huge numbers, last year just 30 people were arrested for drug-related and public order offences as well as assault, sexual assault and being drunk and disorderly.

Sussex Police added: “We received an application for an extended licence which prompted a number of questions.

“The applicant failed to give adequate answers within the required time limit and so a formal objection was submitted. This is normal practice in licensing.

“The applicant then withdrew their application.

“The event could have still been run at the venue under the existing premises licence, allowing alcohol to be served until 1am and music until 2am.”