Dozens of neighbours have objected to plans to extend a small Co-op store in Kemp Town.

At least 30 people have opposed a planning application that would enable the St George’s Road branch to double in size.

The plans involve extending the current branch, on the corner of College Place, into the former 24 restaurant next door at 24 St George’s Road.

Co-op bosses also want to fill in a courtyard area to create more floor space for the store.

Neighbours said that they were concerned about noise and structural damage and they have complained about lack of consultation.

They sent 30 letters of objection to Brighton and Hove City Council and nine more after the plans were amended.

One neighbour, whose other details were redacted on the council’s website, said that part of the charm of the area rested with the small independent shops.

The neighbour said: “Being resident directly above the new plant room, I am very concerned about noise.

“The current AC (air conditioning) and ventilation units cause too much noise as they are.

“With a bigger shop, there will be more machinery and more noise. This will be coming from directly underneath our room. How can Co-op even consider this?

“I can’t see why any architect would think that it would be suitable to put a plant room underneath someone’s bedroom!”

Another neighbour said: “The planning application is still only describing roofing over a courtyard and changing the shopfront.

“In discussions, the Co-op refuse to change it to include the demolition and rebuilding of the entire shops and basements.

“I request the planning department insist the application is resubmitted with a full description as the negative impact on the area, local community and residents is so significant and not reflected in the description.” 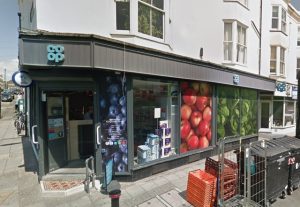 Five letters of support were also received, two from outside Brighton and Hove.

One commenter wrote: “The Co-op serve the community well and this redevelopment of what is a dilapidated property is something I fully support.

“Increasing disabled access is also a great positive for this application. Far better that the Co-op remain in Kemp Town than have another supermarket move in.”

Former Labour councillor Gill Mitchell and the Labour leader of the council Nancy Platts both asked for the application to go before the council’s Planning Committee.

Ms Mitchell, who represented East Brighton ward, said: “This seeks to convert a corner shop into a larger supermarket within a site that is totally unsuitable for it and will not be in keeping with the other smaller scale stores in this area of Kemp Town Village.

“A large supermarket operation, with all of its attendant noise and disturbance, crammed into this site will have a detrimental effect on all neighbours, especially those living above and within it.

“It is imperative that issues such as the structural stability of the upper floors and adequate sound-proofing measures are taken into consideration.”

She said that the people living above numbers 24 and 25 would lose the more open view of the courtyard as it would be replaced with a flat roof.

Councillor Platts, who also represents East Brighton, listed 10 concerns including the structural impact on flats above, increased noise at unsocial hours and the impact on local traders.

Pegasus Planning Group, which submitted the application on behalf of the Co-op, said that the redesigned entrance would improve accessibility – and noise from the rear courtyard would be reduced.

Pegasus said: “The extension will infill an existing courtyard and facilitates a more efficient store design.

“Additionally, the rear yard area will be used less as a result of this proposal which will remove some of the doors from the premises on to the external access to the north.

“This will have the potential to positively impact on residential amenity via a reduction of noise disturbance caused by movement of staff and opening and closing doors.”

The application is due to be decided by the council’s Planning Committee next Wednesday (7 August) at Hove Town Hall. The meeting is scheduled to start at 2pm and should be open to the public.