People living near a major building scheme could have venomous snakes slithering in their gardens if excavated soil is reused on the site.

Adders have already been relocated once as part of plans to build 125 homes between Overdown Rise and Mile Oak Road in Portslade.

Now the developer wants to use excess soil to add a landscape feature which would mean relocating the snakes a second time.

This would save the estimated 7,000 lorry journeys that would be needed to remove the soil from the Mile Oak site.

But only last month a dog was bitten by a snake – believed to have been an adder.

The incident happened in Gorse Close, which is next to the Clarion Housing Group scheme.

North Portslade ward councillor Peter Atkinson said that adders had been moved to the northern end of the site.

Councillor Atkinson said: “They have been travelling back to their original nesting sites which, of course, are no longer there.”

While adders are venomous and can cause a nasty inflammation, their bite is rarely fatal. They are most dangerous to people who are young, old or ill.

Clarion’s proposal has drawn opposition from county ecologist Kate Cole. She said that, when other reptiles were being taken to another site – or translocated – last year, “significant numbers (of adders) were caught, with all being retained on site”.

The housing association’s aim, working with building contractor Thakeham Group, was to use the excess soil not just to build a landscaping feature – a tussocky grass bank.

The aim was also for the proposed embankment to act as a sound “bund”, reducing traffic noise from the A27 Brighton bypass.

Councillor Atkinson said: “We’ve tried to canvass local opinion and it’s about three to one in favour of using the soil on site at the moment.

“The extra traffic the development will create is still a major worry, as is the strain it will put on GP services.

“Parking won’t be a problem though as there are more than enough spaces on site. Flooding also remains a worry.”

Neighbours will have a chance to learn more from Clarion and Thakeham staff at an exhibition at Portslade Sports Centre next Tuesday (20 August). Invitation letters have been sent to about 300 nearby homes.

Thakeham project director Gary Gill said that it was an informal event and people could ask questions about the route for site traffic and what would happen during construction work.

Councillor Atkinson and his ward colleague Councillor Anne Pissaridou have both walked the proposed route with a transport official from Brighton and Hove City Council.

The two Labour councillors believe that another route for site traffic may be needed.

And they are keen that – if Chalky Road and Graham Avenue are used – lorries are not on the roads when children are heading to and from school.

Mile Oak Primary School is at the southern end of Graham Avenue and the Portslade Aldridge Community Academy (PACA) is in Chalky Road. 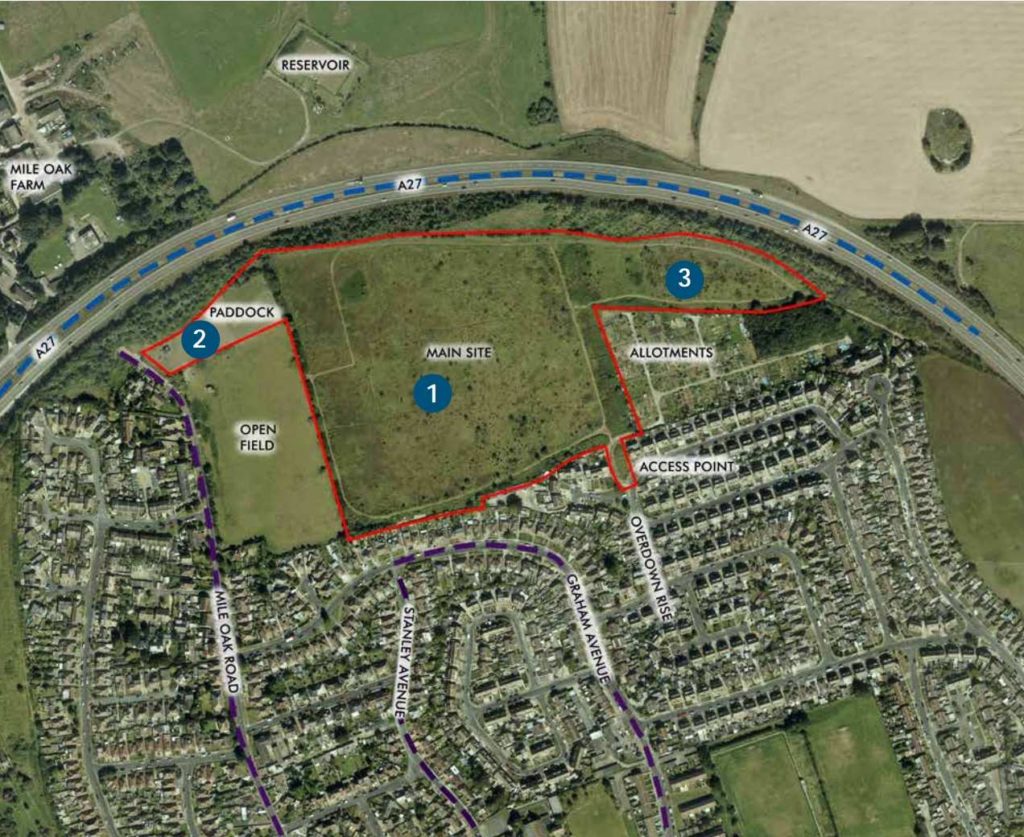 An aerial view of the site of 125 new homes planned for Mile Oak, bounded by the A27 Brighton bypass to the north

Work on the £35 million new estate is expected to last until June 2022, with Clarion having agreed a £24 million contract with Thakeham for the construction phase.

Of those, 40 per cent of the homes will be classed as “affordable”, or low-cost, with 28 of them for rent and 22 for shared ownership.

The other 60 per cent – or 75 of the homes – will be for shared ownership but at the full market price.

The public event next Tuesday (20 August) is due to take place at Portslade Sports Centre from 6pm to 8pm.

Anyone unable to attend can email questions to portslade@thakeham.com.