The former Brighton and Hove Albion striker Dean Saunders has been jailed for 10 weeks for refusing to take a breath test when he was stopped by the police. 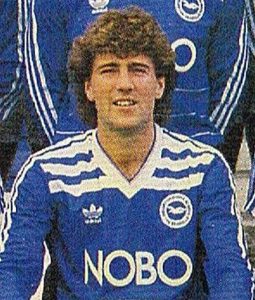 Saunders, who played for Brighton from 1985 to 1987, was also given a 30-month driving ban at Chester Magistrates’ Court.

The ex-Liverpool and Wales footballer was stopped on suspicion of drink-driving by police in Boughton, Cheshire, on Friday 10 May.

Today (Wednesday 28 August) he was reported to have had slurred speech, with the court told that he had to prop himself up against his Audi A8 car.

He was jailed by District Judge Nicholas Sanders who described the TV football pundit as arrogant.

Saunders’s lawyer Conor Johnstone said afterwards that he would appeal against his sentence because he believed that it was excessive.

The defence team planned to ask a crown court judge for bail this afternoon to prevent Saunders, who used to live in Hangleton Road, Hove, from having to go to prison.

Saunders was described as “in shock” and “disappointed” having been jailed by the judge who said that he seemed to believe that he was above the law because he was in the public eye.

But the judge said that the opposite was true and that “someone in the public eye should expect a deterrent sentence when they flout the law”.

Saunders, 55, of The Paddocks, in Whitegate, Cheshire, had had two pints to drink at the Chester races and a pint with his dinner at a hotel, the court was told.

The father of three believed that the drink may have “interacted” with medication that he took for asthma and his knees and back.

He also believed that he was entitled to consult a solicitor before agreeing to take a breath test. He wasn’t.

Saunders, who also played for Oxford United, Derby County and Aston Villa, was ordered to pay prosecution costs of £620.