A violent thug has been jailed for smashing a stranger over the head with a bottle of vodka in Brighton. 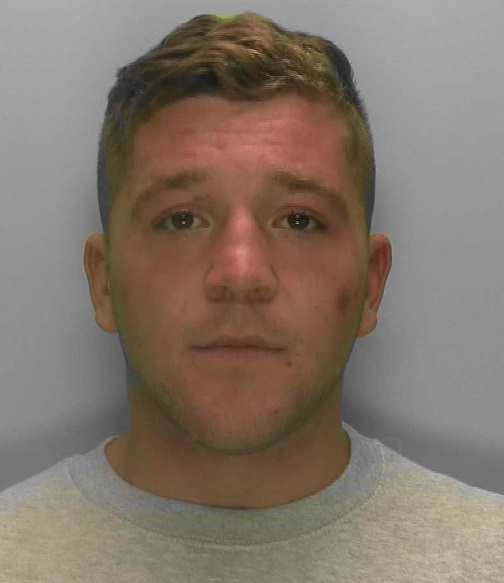 Joseph Smith, also known as Joe Smith, 23, and of no fixed address, was found guilty of two counts of assault causing grievous bodily harm (GBH) with intent after the unprovoked attack in August last year.

At Lewes Crown Court, Smith was jailed for seven years, with two years on extended licence.

The victim, Richard Brown, had stopped for a kebab with a friend on his way to Brighton station while his girlfriend waited outside.

The court was told that Smith and a friend were being rude and abusive to passers-by in the street.

They approached the victim’s girlfriend and made a series of lewd comments towards her.

The victim left the shop and he, his girlfriend and another friend continued walking to Brighton station, ignoring the pair.

Smith followed them to Brighton station and kept on being abusive.

He then looped in front of the victim and smashed him across the head with a large bottle of Grey Goose vodka, causing him to fall straight to the floor.

He was taken to hospital by ambulance where he received treatment for multiple complex facial fractures.

Smith initially boarded a train to swap his t-shirt with a man on board, before taunting the victim’s girlfriend who was trying to point him out to staff.

Smith said: “What was I wearing? Well it will show differently on the CCTV, won’t it.”

He then quickly left the station before officers arrived. After inquiries, he was arrested at an address in Burgess Hill in April.

The judge said that Smith was a dangerous individual with “an inability to control himself” and “showed no real remorse” for his actions.

In his victim impact statement, the victim said that he has felt vulnerable and struggled to sleep properly since the incident.

The second charge relates to an incident in March last year, where Smith punched a man after being kicked out of a bar in Burgess Hill, fracturing his jaw and knocking out several teeth.

Detective Sergeant Allan McTaggart said: “Smith is a repeat violent offender who has shown absolutely no remorse for his behaviour or consideration for his victims.

“I thoroughly echo the judge’s comments and welcome the significant custodial sentence imposed on Smith for this senseless attack.

“There is absolutely no place for violence of any kind on the railway network and we will do everything in our power to bring these offenders before the courts to answer for their actions.”