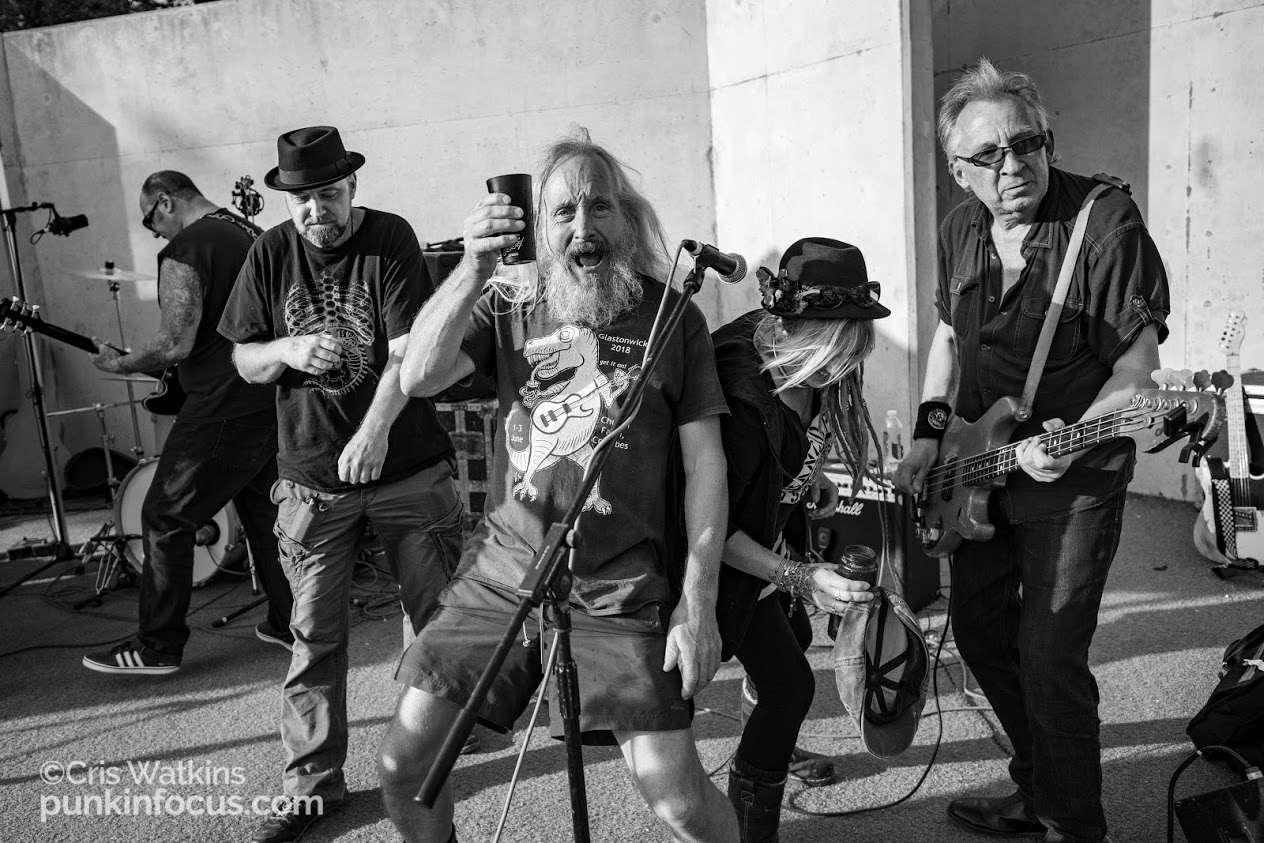 Thankfully the sun was out in force for the second annual ‘Punks Picnic’ here in Brighton & Hove over the weekend. I must confess to keeping a close eye on the weather report for this years event, which was held at the B.O.A.T (Brighton Open Air Theatre) located within Dyke Road Park on Saturday.

Last year’s inaugural event took place considerably earlier on 27th May and once again it was a hot day – Read our review HERE.

B.O.A.T is a registered charity and their objective “is the advancement of education in arts culture through the establishment and maintenance of an open-air theatre in Brighton & Hove for the use of residents and visitors”. On their informative website I note that there is a logo sporting the words “attitude is everything – Bronze ***” and indeed there is often plenty of attitude with punk, but today’s event was a family celebration to let folks chill out in the sun and enjoy decent music in a safe environment.

As we arrived DJ Gremlin was on the decks. It was almost as though he had nipped around to my house and raided my record collection. It was indeed home from home all day long, with only around two tracks that I don’t own. We had everything from old school punk right up to the current up-and-coming bands including BlackWaters. One particular record stood out as it sounded absolutely terrific and that was ‘Overkill’ by Motörhead. 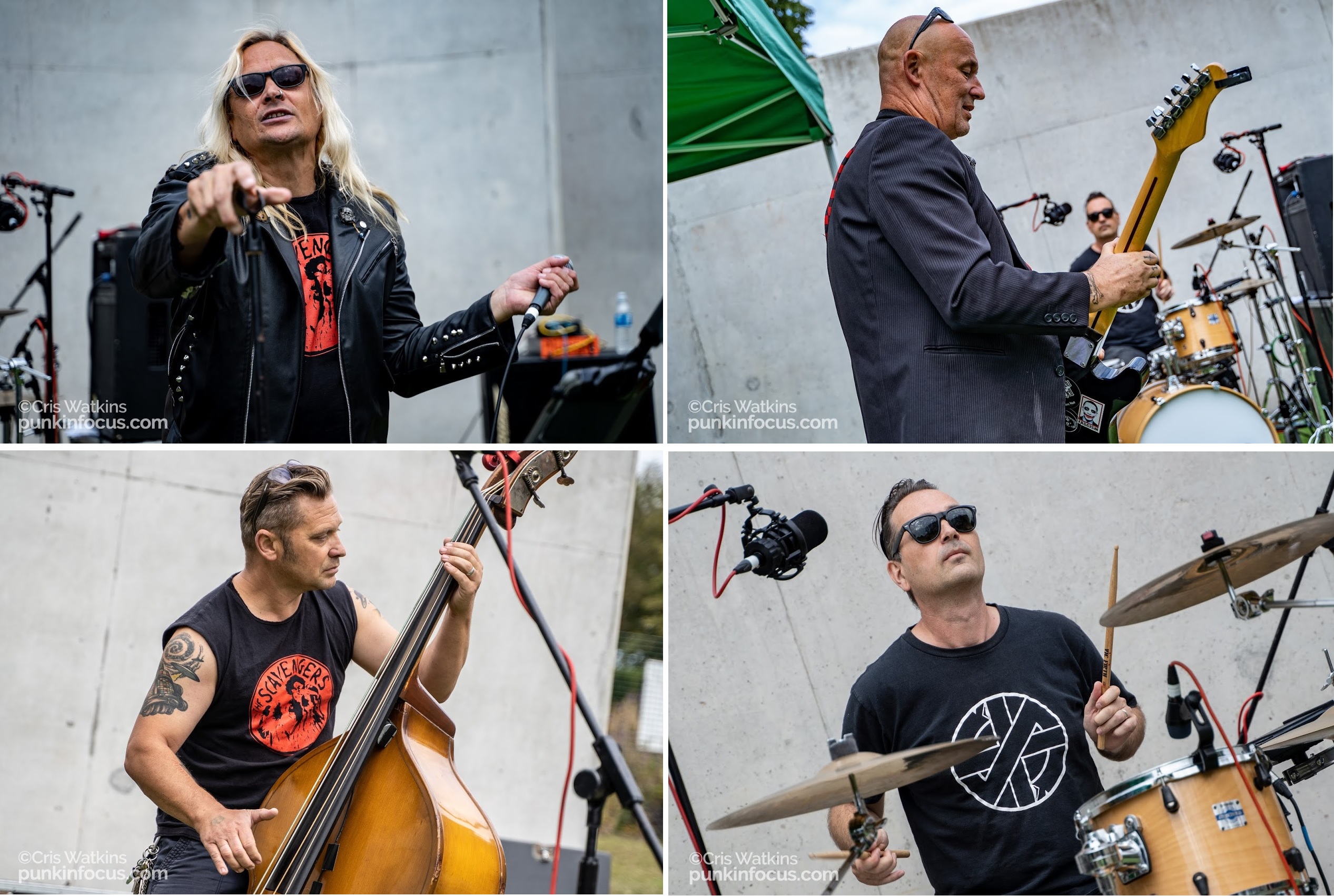 First band up to perform in front of the concrete wall at 2pm was The Scavengers who are a 4-piece fronted by Ian R. Anderson, who is best known for leading Leicester garage punk band Crazyhead from 1986 onwards. There’s a distinct rockabilly/rock’n’roll vibe going down with these guys and so if you were to amalgamate the gutsy Iggy Pop/Stooges tracks with the Stray Cats, then you can see where they are coming from. They started with a track the drummer wrote called ‘Basement’ and finished 32 minutes later with a Crazyhead composition. 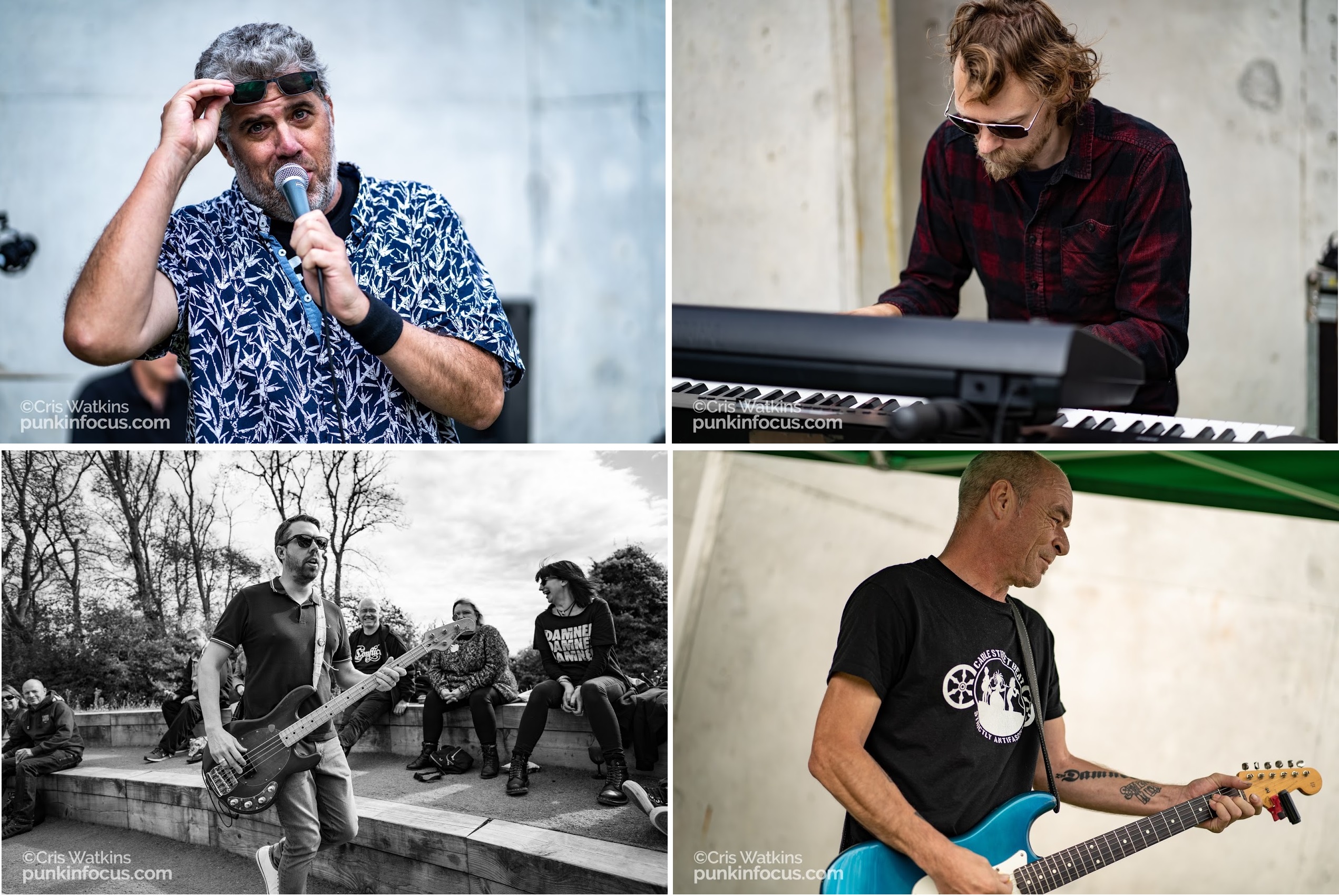 With a break of a mere thirteen minutes, it was time for The Fish Bros quintet to grace the stage, with their eclectic mix of music hall frivolity. This is a band who are clearly out there to have fun. Their opener was referred to as “the cucumber song” (ideal in bread for a Punks Picnic) and was swiftly followed by ‘24 Hour Drinking’. As usual, singer Martin Fish proudly displayed his sizeable midriff, but instead of the usual “You fat b*stard” chants, Martin encouraged the crowd to chant “You fat custard” as there were children present. The Fish Brothers are the ‘Carry On’ films of the semi-punk music world and the crowd enjoyed their 35 minute set. 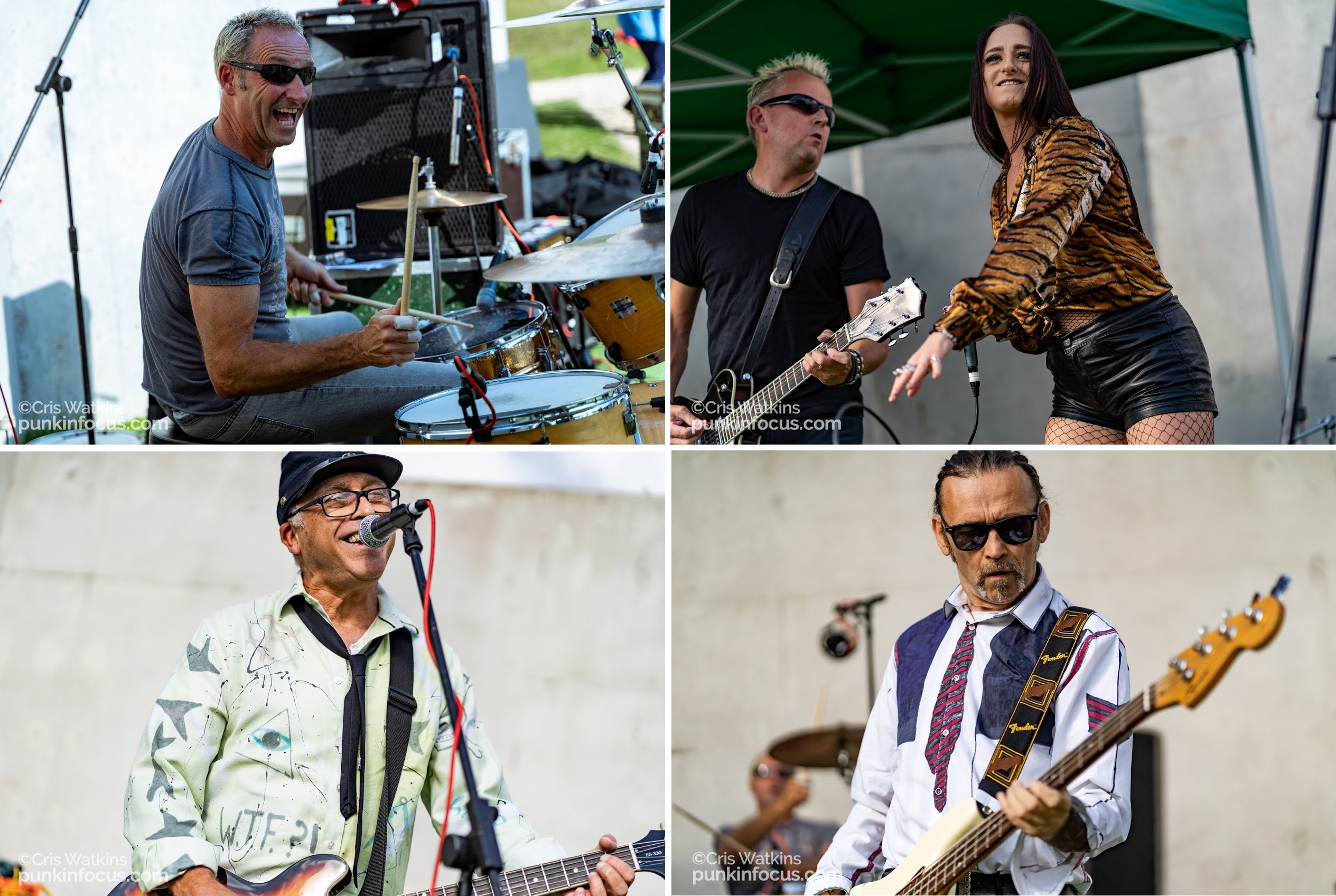 A mere 18 minutes later and The Weird Things graced the stage for a decent 37 minute set of rocky style punk, with tracks taken from their debut album ‘Ten Digit Freak’ as well as numbers from their forthcoming second album, which is set to hit the streets on 18th October. This was my second encounter with the current lineup that now features Leila on lead vocals, having taken over from Charlie in August 2018, who has moved onto pastures new. Leila is certainly having a ball and her pheromone filled performance certainly captivates. Singers often get into the zone by psyching themselves up for their performance, whereas Leila got her fix from cuddling her friends new baby for several minutes just before going on. Rock’n’roll lifestyle eh? It’s more in keeping with her ‘real’ day-job actually.

Other than Leila, The Weird Things are a well travelled bunch with her dad Martin Parrott (aka Marty Love) on drums, who also plays for (Case/Blood and Roses/Dirty Love/Los Paraliticos/Age of Chaos/Johnny Moped), Mr Jan (bass guitar) (ex Dogdonfire), Simon Peet (guitar) (ex Riffs/Case), and Dick Crippen (guitar) (ex Tenpole Tudor/King Kurt/Pearl Harbour). There’s now also a connection to The Sensible Gray Cells in there too, as drummer Martin plays in The Damned’s Captain Sensible and Paul Gray’s band, who are working on an album due for release next year.

As you can see, there are some well seasoned musicians in the band that hail from in and around “Sarrf” London. The combination of the two guitars produced a really great rock feel to their sound and the crowd appreciated it all straight away. Clearly they know how to play their instruments! 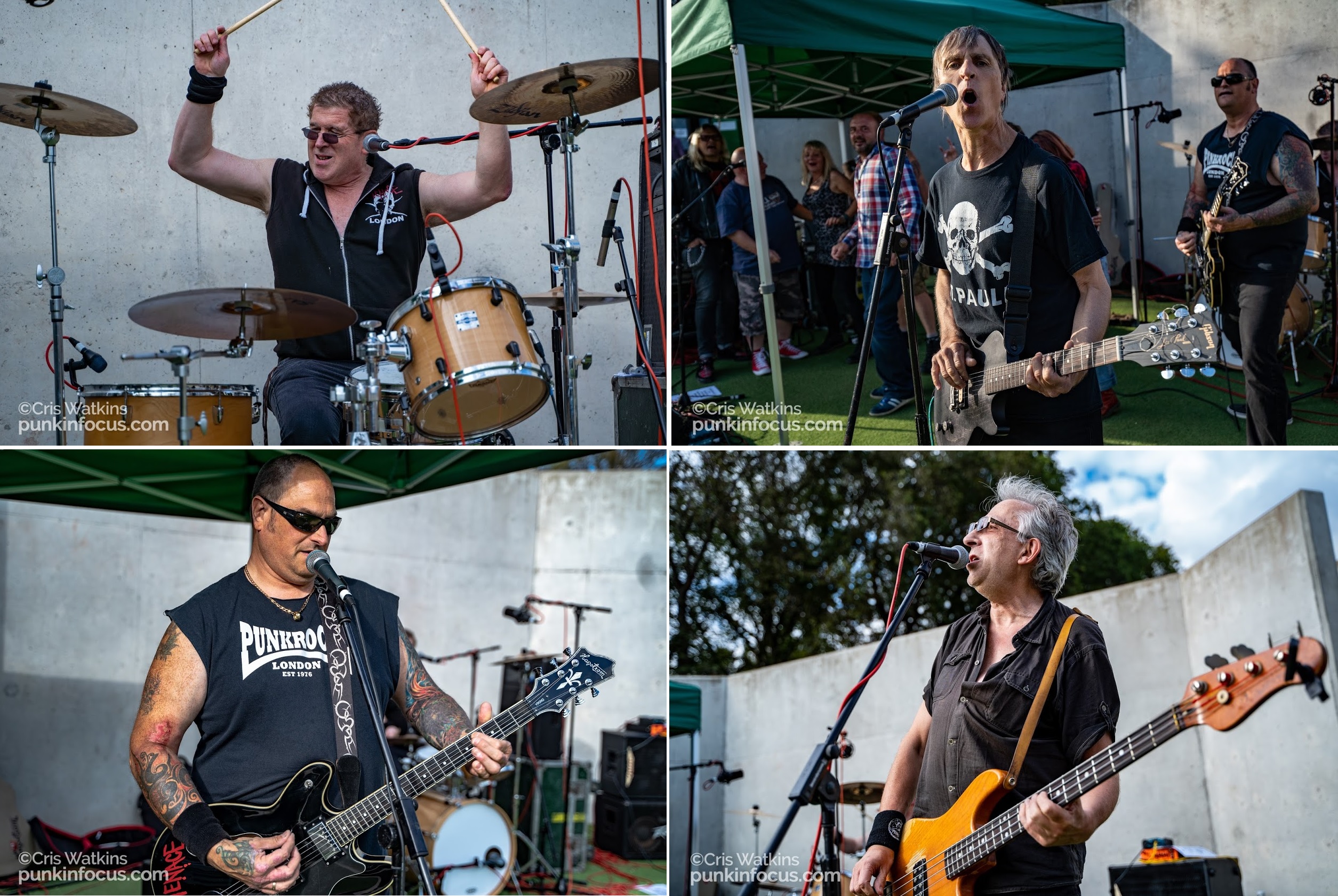 The afternoon’s proceedings were brought to a close with a 54 minute set from Menace who along with The Weird Things, both appeared at this year’s biggest punk festival – Rebellion. Amazingly, this was my first encounter with Menace despite the fact that they were around in the 1977 heady days of punk. They were never really at the fore and yet here we are 40 plus years later and a new album entitled ‘Social Insecurity’ saw the light of day last December – listen HERE.

As is often the case these days, it’s not the original band’s lineup still going today, but the Brighton punk picnickers didn’t care one iota, as several took to the ‘dancefloor’ and bopped around to their repetitive early punk sounds. The vocals are often shared across the quartet and it’s difficult to judge who is going to sing next, but that was part of the fun. This band certainly were not a menace and I particularly enjoyed once again hearing their 1978 ‘Small Wonder’ records ‘G.L.C.’ classic, that I had forgotten about. Maybe I should endeavour to locate a copy of their ‘Punk Singles Collection’ album, as I’m sure I would enjoy it. Failing that, I can always catch them again in Sussex next year on 10th January……watch this space for further details……..

….And that was it, fun over at 5:30pm. No mess to clear up for the willing volunteers as all the picnic clobber was thoughtfully disposed of in the bins. Time will tell whether there will be ‘Punks Picnic 3’ for next year, but let’s keep our fingers crossed. 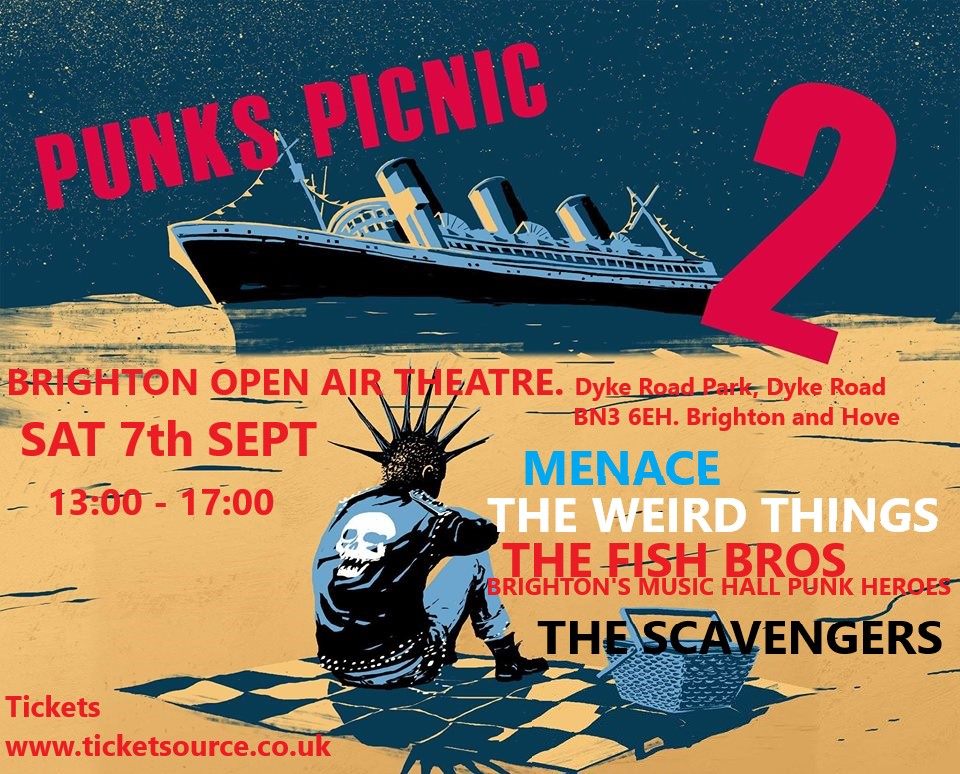