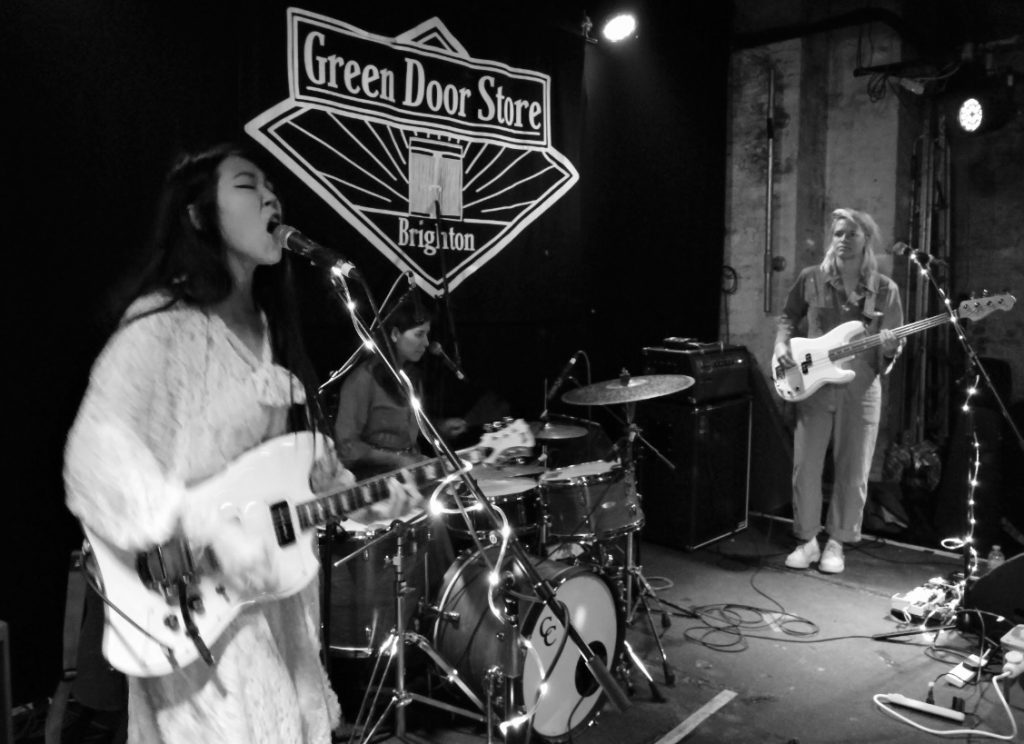 The headline act at the atmospheric Green Door Store in Brighton on Monday night was Sasami Ashworth, who simply goes under the name Sasami.

Sasami has been making music in the Los Angeles area of California, in almost every way you can, for the last decade and is currently embarking on a nine date UK and Ireland tour in support of her recently released debut self-titled ten song album on Domino Records, which you can order from HERE or listen (and order) it from her Bandcamp page HERE.

Sasami is a versatile performer as she has previously played French horn in orchestras and studios as well as playing keys, bass and guitar in local rock bands Dirt Dress and Cherry Glazerr. She has also contributed vocals/string/horn arrangements to studio albums by Vagabon, Curtis Harding, Wild Nothing, Hand Habits and the like, as well as producing tracks for other respected artists. She has gained a reputation as an all-around musical badass!

After graduating from the Eastman School of Music in 2012, Sasami spent her time scoring and making orchestral arrangements for films, commercials and studio albums, as well as being a deeply committed music teacher in Los Angeles. In 2015 she was invited by Cherry Glazerr’s bass player, Sean Redman, to join the band on synths. She recorded the 2017 ‘Apocalipstick’ album with the outfit and spent two and a half years touring the world with band until she departed in 2018 in order to focus on her own music.

Sasami’s first ever self-released single ‘Callous’ was given Pitchfork’s “Best New Track,” and she has already shared bills with the likes of Japanese Breakfast, Liz Phair, The Breeders, and Blondie.

And so back to the Green Door Store concert. The mood in the bar was jovial and we exchanged pleasantries with the promoters and Emily from Bloom and Lily from Penelope Isles, who was there with her brother Jack. We were out for a pleasant evening’s entertainment and we have previously enjoyed several performances from tonight’s support artists CIEL. 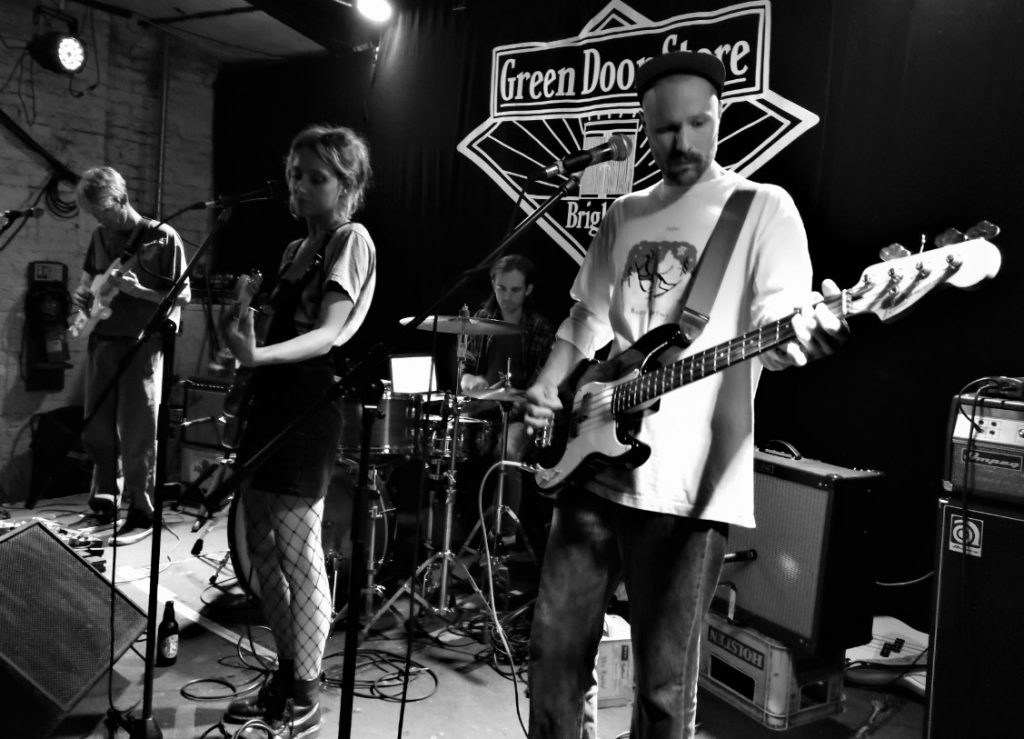 CIEL which is pronounced (She-Elle) was initially the solo project of Dutch born Michelle Hindriks. A few years ago, she came over to the UK and attended the terrific BIMM musical school in Brighton and the city has been calling her back ever since and now she is a resident here.

Michelle has put her band together that initially consisted of Hannah on drums and Scott from Bloom has even filled in along the way, but these days they seem to be a more settled unit consisting of Michelle Hindriks (vocals, guitar, keyboard), Jorge Bela (guitar), Kieran Mansfield (bass) and Lawrie Miller (drums).

Tonight I noticed that Michelle’s keyboards had disappeared in favour of a laptop under the jurisdiction of Lawrie. Thus decluttering the stage and allowing for Michelle to concentrate on the guitar playing and vocal delivery.

We were treated to several numbers of shoegaze style mellow dream-pop, with nods to The Cure, New Order, The Wake and St Etienne. Next week (Wednesday 18th September) will see the band release their next single, which is called ‘Naked’ and it had an airing tonight with its chugging Cure beat. The room was absolutely packed from the very start of their performance, which is a very encouraging sign for this entertaining act. In fact, Michelle has posted …“We had an amazing time playing at The Green Door Store yesterday, opening for SASAMI. So many familiar and new faces! It means the world to us 🖤 thanks for coming out early and a huge thank you to Joy. for having us!! 🖤 Our next show will be next Monday 16th September at The Hope & Ruin supporting JAGUWAR ✨”. 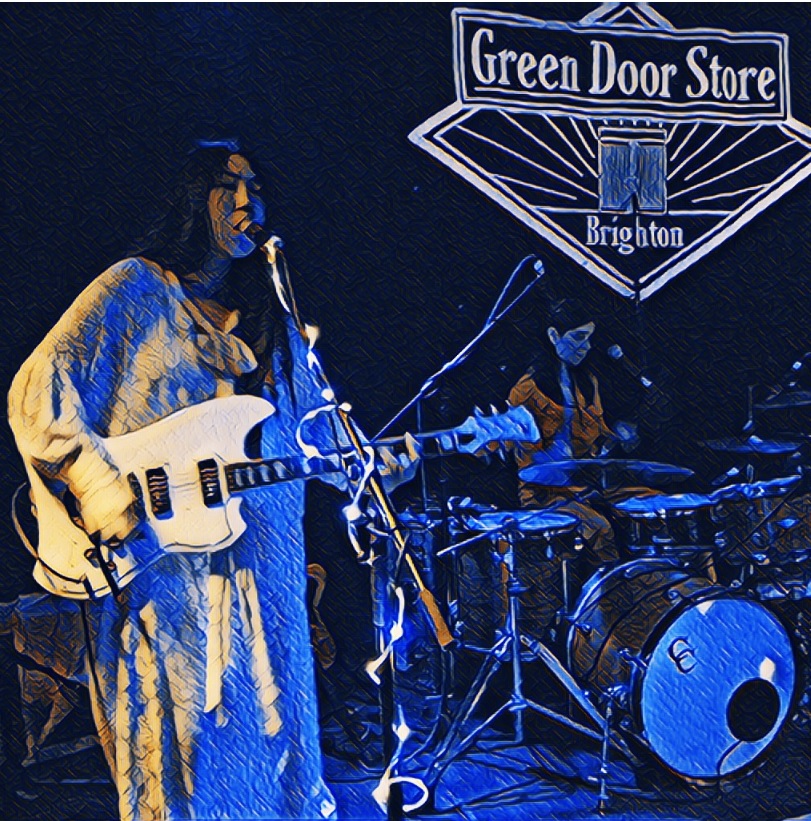 After a short interval it was time for Sasami and her two bandmates to take to the stage. Sasami had changed into a long white dress and her pals were sporting striking red jumpsuits. Sasami announced her arrival by screaming into the mic in order to get folks through from the bar area outside. It worked!

There was an air of anticipation in the crowd as to what we were going to get. Turns out that tonight was the busiest night of the tour so far, and it was a Monday night, so well done for those that made the effort.

Obviously lots of adrenaline flows through artists as they perform, and Sasami’s cry to rally the troops was no doubt a part of this, however when she stridently delivered the statement that “women and people of colour to the front and white guys step back”, this was met with a degree of surprise amongst certain members of the crowd. In fact one guy at the back shouted “f*ck you”, which was more than likely delivered out of shock rather than a drunken retort. It felt like Sasami had instantly alienated a certain percentage of her audience.

Following this, and a short way into her set, she informed us that she felt insecure at her own show. There certainly wasn’t any hostility or aggressiveness emanating from the crowd – they were enjoying her material.

Brighton is known worldwide an all-inclusive city. It’s even had a tune written by local band Swoon called ‘Bubble’, which proudly showcases the city’s diversity. As far as I see it, Brighton welcomes everyone, whether they are black, white, gay, trans, straight or anywhere in between. This is a major factor why artists gravitate to the city to perform and be based here, which is why Sasami’s statement felt unnecessary.

Clearly the events of the evening were still playing on her mind and she has posted a statement on social media, and of course, there are two sides to the story. Sasami’s statement reads…..“If you come to my show and I ask for people of color and women to the front, please just respect my request. Maybe don’t yell “f*ck you” to the women on stage like some fragile fool did last night. I didn’t make up “girls to the front,” it’s not revolutionary. Women have been standing behind tall dudes for decades and I want my show to be a place where POCs and women feel safe, loved, appreciated and in rocking position. If this offends you, ask yourself why or maybe just don’t come. FYI it doesn’t always feel empowering to ask for space. It’s f*cking scary and I would appreciate to not feel scared at my own shows. That being said, I’ve mostly been feeling lots of love and respect on the tour so far from all sorts of folks, so keep bringing that good energy and we will keep giving 1000% every night 🔥❤️ thank you!”

The main show itself was akin to an updated version of a Patti Smith set with Sasami’s powerful, passionate vocals set against shoegazey soundscapes with serious amounts of guitar reverb and distortion which were interspersed with calmer more reflective elements. It went down well in the main.

You can watch Sasami’s videos on her YouTube channel HERE.