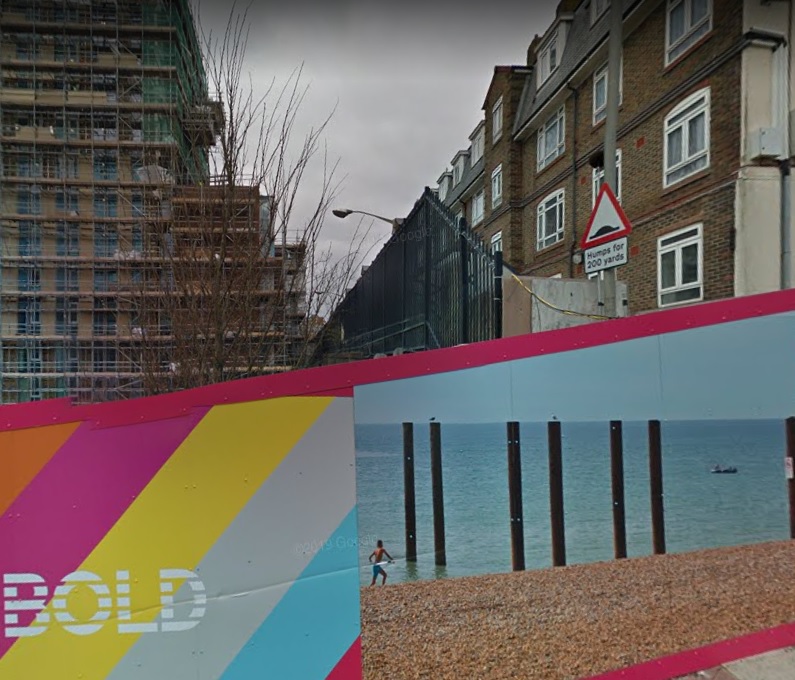 The Milner Road flats on the right, and and new student block on the left. Image from Google Streetview in March 2019

Neighbours have complained about noise, parties and even nudity within days of students moving into a new block of flats just yards away.

People who live on the western side of Milner Flats off Kingswood Street have found themselves directly overlooking the student flats built in Circus Street on the site of the old fruit market.

Residents say children are falling asleep at school after being kept up into the early hours of the morning – and are now filming the students as evidence to show the developers.

Holding her hands close together to illustrate the distance, Councillor Mears said there was hardly a gap between the student development and Milner.

Councillor Mears said: “It’s the noise and partying, there is one person who acts totally inappropriately with no clothes on.

“The willful destruction that goes on, the all night parties, the noise, I think it is a terrible development.

“I don’t think residents in Milner Flats had their views ever really taken on board, now there is a serious problem.

“There needs to be some real work with these residents. Their lives are blighted by this scheme as we said it would be with the original planning application.

“It is this council’s responsibility to ensure it is addressed in some way.

“Something over the windows, or the way the university manages its students and there’s a proper management programme put in place so they adhere to it.

“We have a duty of care to our existing residents whose children are late to school because they are up at two or three in the morning because they can’t sleep. Some children have fallen asleep in class. This is not acceptable.”

Councillor Mears, a former council leader and veteran of the Housing Committee, recalled how in the early stages of negotiations the developer wanted to demolish Milner Flats which is one of the largest council properties in the city, but the authority said no.

She reminded the committee almost 4,000 people signed a petition against the development.

Queen’s Park ward representative Councillor Evans said she had been to a meeting along with executive director of neighbourhoods, communities and housing to hear residents addressing their concerns to the developers and student accommodation company Kaplan.

Councillor Evans said: “They turn up to every meeting for resident engagement as a box ticking exercise and say ‘really! that happened! Oh my goodness we didn’t know anything about that’, then carry on doing it.

“The residents are all taking photos of them doing it. They don’t seem to know people have mobile phones these days.

“There is action happening.”

Councillor Evans told the committee she and fellow Queen’s Park ward Labour councillor Nick Childs are working with the area’s MP Lloyd Russell-Moyle to find a way forward to put legal pressure on the developers and Kaplan to do something.

She said: “There are now a few hundred students in there and they are already causing all kinds of problems.

“This is coming on top of three years of building anger and resentment in that area and in those flats. I understand that.

“They are, therefore, even angrier than they would otherwise be with the student housing people for not controlling the students better.

“It has all got very, very heated down there and I completely understand why.”

The Circus Street is a joint partnership between U & I plc, SE Dance and Coast to Capital LEP to build 142 homes, 2,046sqm of commercial space, 450 student bedrooms and a dance studio.

Student accommodation company Kaplan websites are promoting the rooms at international students at the University of Brighton’s International College.

Options include a room in a shared flat arrangement with between five to eight students sharing a kitchen and dining area, or larger studio flats with a private kitchen and study space.

Rents for 15 weeks including deposits are listed on the company’s site start at £3,400 for a classic room and go up to £4,675 for a studio from September.