The best non-Kraftwerk electronic gig there is! 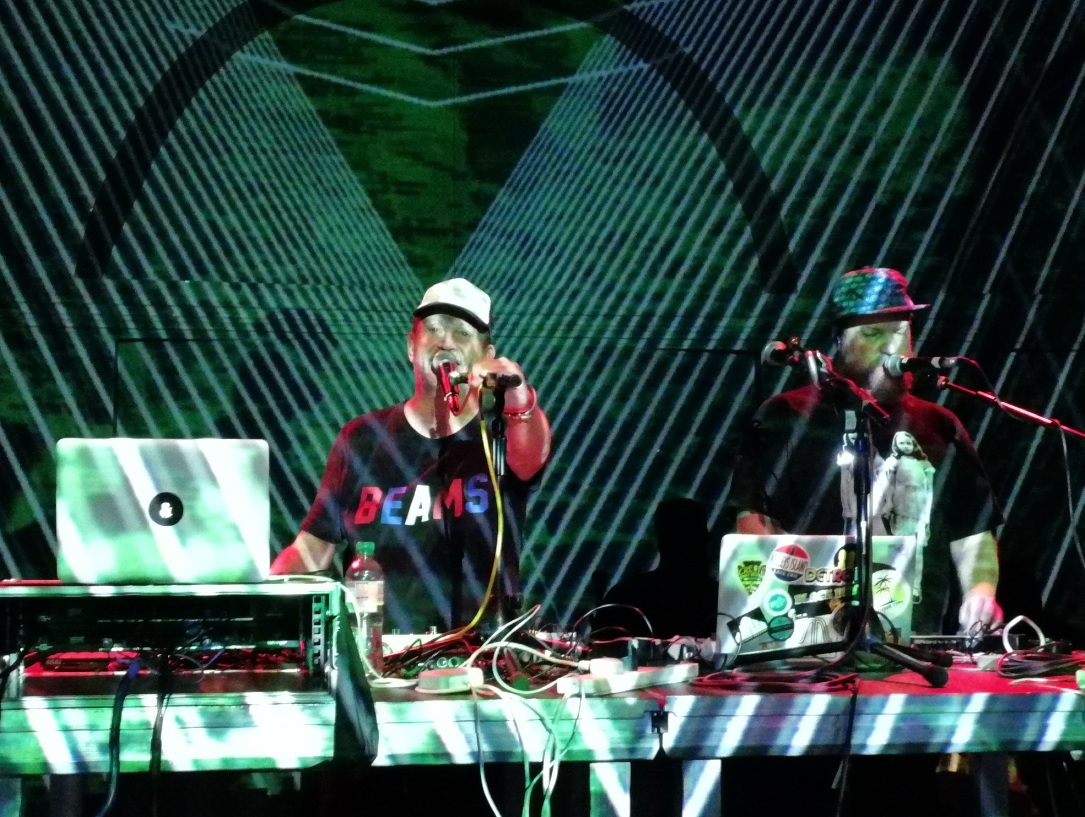 Tonight was one of those perfect nights! We should have realised that our luck was in when we managed to grab a parking space less than 100 feet from tonight’s venue – The Old Market, located in deepest darkest Hove.

One entering the venue, we spied Lily and Jack Wolter from Penelope Isles in deep discussion with tonight’s event organisers, Melting Vinyl, which is always nice to see other bands supporting label-mates. Shandies purchased, we had the banter with several eager punters including a lady called Trish from Australia, who was clearly out to have a fab evening.

We secured our positions at the front of the venue and circa 8:30pm these two tall chaps quietly wandered onto the stage. Without any fuss, the electronic sounds started booming around the venue. It’s about now that I think to myself that I suspect quite a large number of those gathered, really haven’t got a clue as to whom they are witnessing play live! For Kincaid is a relatively new name in the world of music and his debut 6-track mini-album ‘Late For Sum’ won’t be out until tomorrow (Friday 11th October), which incidentally is available in a limited edition green vinyl run of a mere 350 copies. Thankfully there are copies of this and the CD available to snap up a few hours early – yes I bought one! 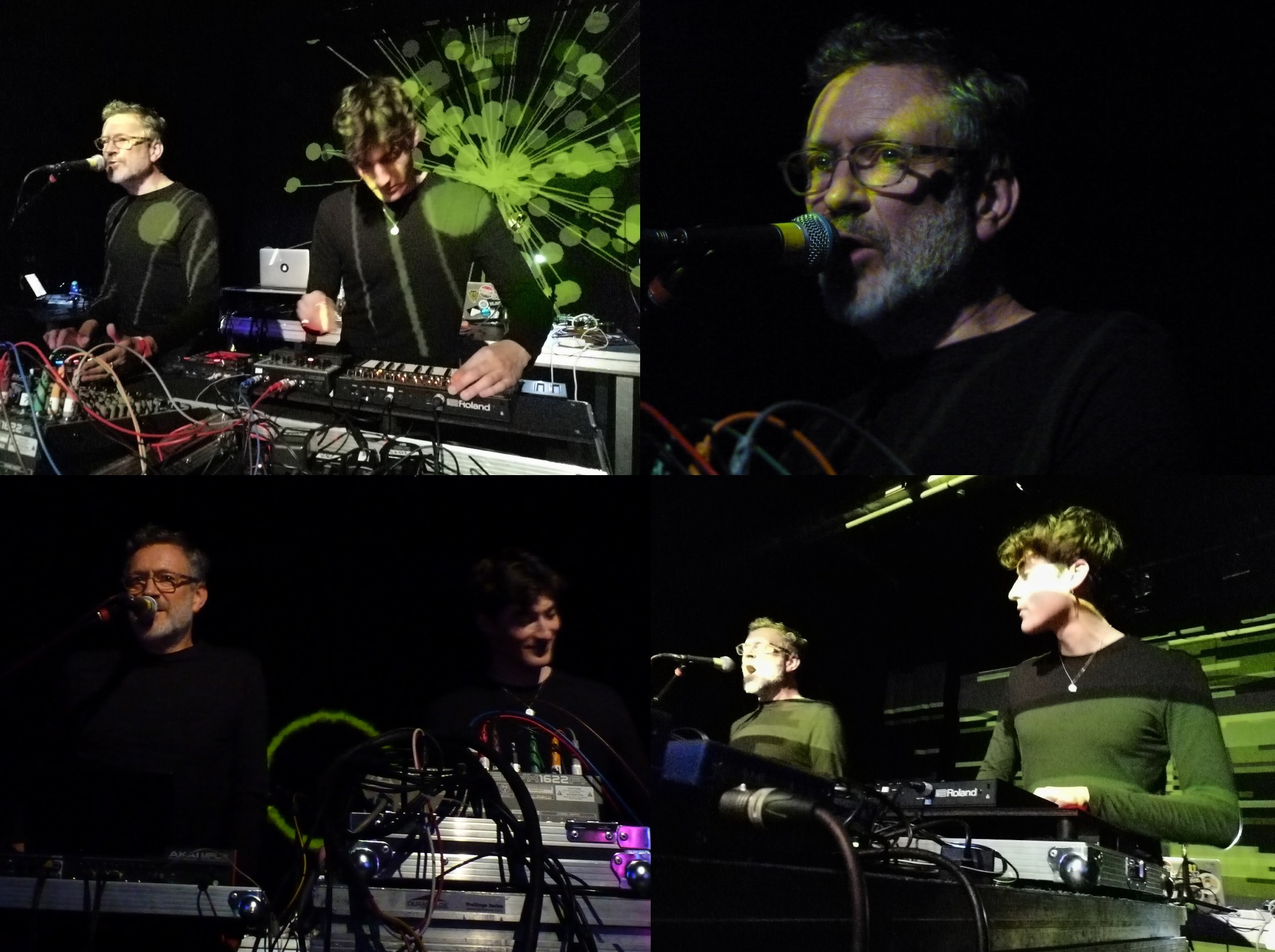 You see the 24 year old Kincaid was appearing this evening with his very proud father as a duo and his dad is only none other than Neil Arthur aka Blancmange who had previously sold out The Old Market less than a year ago. It was a fantastic show and of course the Brighton & Hove News Music Team were there – read our report HERE.

The Arthur’s set was to be a mere half hour made up of a handful of tunes backed with rave style images behind them. Think of Blancmange’s music and then give it a harder modern edge and infuse it with bleeps akin to the dance trance of Orbital and Underworld et voilà you have arrived at the exciting world of Kincaid.

They opened not surprising with the brand new album’s opener ‘Late For Sum’ which flowed into the ‘Big Fat Head’ single from back in March (which is not on the album). The remaining trio of meaty crisp electronic wonders were sharper updates of Blancmange material, namely ‘I Smashed Your Phone’ (found originally on the 2018 ‘Wanderlust’ album); ‘What’s The Time?’ (found originally on the 2017 ‘Unfurnished Rooms’ album); and sandwiched between those two was a 12” extended remix of ‘Feel Me’ (located originally on the wondrous 1982 debut Blancmange album ‘Happy Families’). Although this version has more in common with the ‘Happy Families Too’ album from 2013, which was an update of the original. This was a short and sweet set and went down very well with the crowd, who were obviously out to experience a night of synth music and Kincaid ft. Blancmange were certainly the icing on the cake! Brilliant set and I would see them again without hesitation. 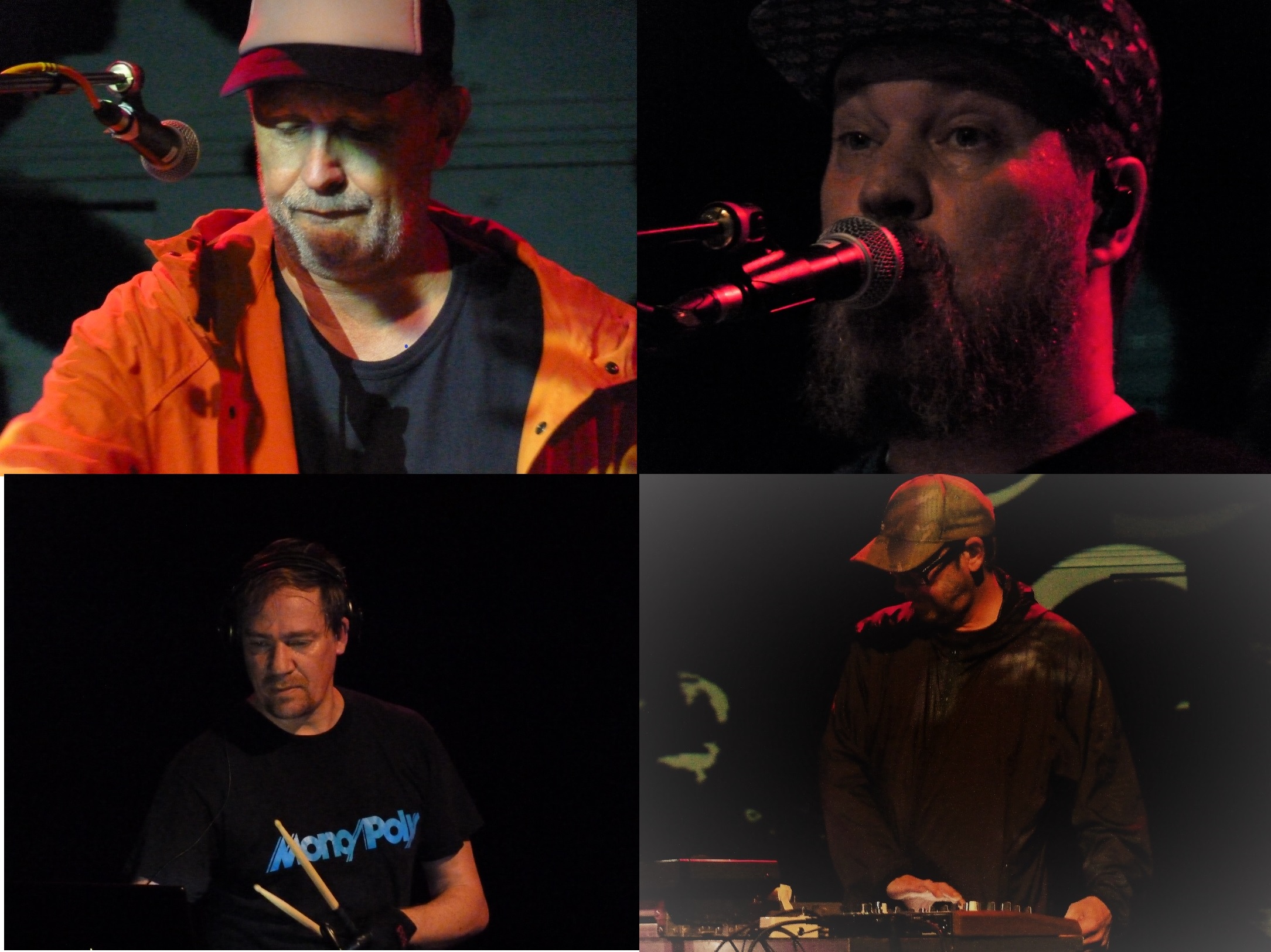 With the bar being raised, (not the one with the beers on tap thankfully) it was approaching 9:30pm and time for headliners Creep Show to make an appearance as part of their select 8-date tour. It seems to me the this Bella Union records supergroup has thus far gone under the radar and I’m 100% certain that for years to come, many people will curse that they missed this evening’s absolutely stunning performance, simply because they hadn’t twigged who the bands personnel were!

So who are the personnel? Let’s meet them!
Creep Show brings together John Grant with the dark analogue electro of Wrangler (Stephen Mallinder / Phil Winter / Benge)

Sheffield born 64 year old Stephen Mallinder has been producing musical sounds for an amazing 46 years! He was a founding member (with Richard H. Kirk and Chris Watson) of the trailblazing Cabaret Voltaire, who initially delved primarily of experimentation with DIY electronics and tape machines, before morphing into various other genres along the way including industrial, electro, and acid house. After 21 years of service with Cabaret Voltaire, Mallinder moved on. He gained his Ph.D in music and popular culture in 2011 and now teaches Digital Music & Sound Art at the University of Brighton. And today he has released his first solo album in 35 years, entitled ‘Um Dada’ and is available to purchase HERE.

Of the quartet, Phil Winter is very much the mystery man to me. I know that he is a member of Tunng, who are a folktronica outfit and that he has delivered synthesizer, bass (electric), sampling, noise and sound effects for the band. I also know that he is one-third of the electronic combo known as Wrangler. The other two members being the aforementioned Stephen Mallinder and Benge, which leads me nicely onto the final member of Creep Show.

Yes you guessed it, completing the quartet is producer/musician Benge aka Ben Edwards, who was born in 1967. He specialises in instrumental electronic music and has amassed a large collection of electronic synthesisers, drum machines and studio equipment which is housed in his ‘Memetune Studio Complex’. Albums by Phil Winter’s band Tunng have been recorded there. Benge first came to my attention back in 2011 when he co-wrote and produced an album titled ‘Interplay’ with the legendary John Foxx (the former Ultravox! frontman) and they toured and recorded as John Foxx & The Maths. I met them both outside the Concorde 2 when they performed there at the time and thankfully have a photographic record to prove it. Benge is also half of Fader with tonight’s support artist Neil Arthur (from Blancmange). Their ‘First Light’ album is a must!

Thus Creep Show is technically a collaboration between John Grant and Wrangler and last year saw them release their debut album ‘Mr Dynamite’ on Bella Union. Turns out that I love the contents of the album much more than its weird cover. In fact, I didn’t buy it until this evening and thankfully grabbed a signed copy. ‘Mr Dynamite’ was voted ‘2018 Album Of The Year’ by Electronic Sound Magazine and was recorded in Cornwall with a lifetime’s collection of drum machines and synthesisers assembled by Benge and explored by every member of Creep Show. Mallinder has gone on record as saying “Mr Dynamite is real, It’s disturbing, he blows sh*t up.” Thus Creep Show is much more than the sum of its parts. It’s almost as if the four band members and their machinery were possessed by another force. And that’s partly the feeling I got from tonight’s performance. 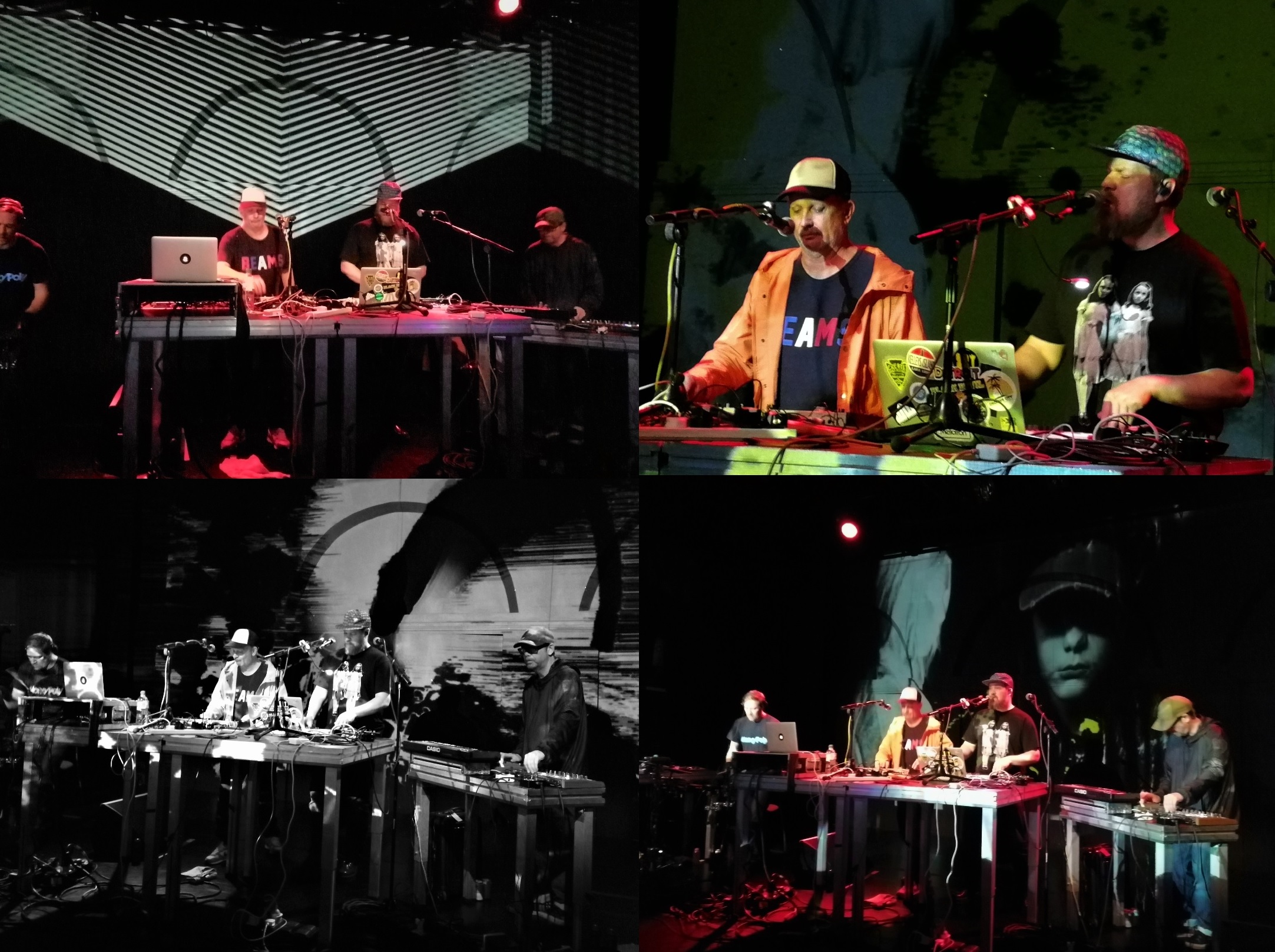 To be honest, I was so enthralled with the whole experience and taking photos, that I wrote scant notes about the gig, rather than ‘War & Peace’. Clearly Creep Show and the band members are ahead of the game here and are musical pioneers and not followers! They were lined up on stage and had laser style graphics going on behind them during their show. This looked and sounded very much like the Godfathers of everything synth, namely Kraftwerk, but with a dangerous funky edge. They had added something akin to the quirkiness of Will Powers ‘Kissing With Confidence’ or Baz Luhrmann’s ‘Everybody’s Free To Wear Sunscreen’ mixed with the revolutionary next phase Kraftwerk with ‘Planet Rock’ by Afrika Bamabaataa & The Soulsonic Force meets Giorgio Moroder ‘From Here To Eternity’.

I loved the vocoder work by Grant and Mallinder – it’s so awesome! Benge’s electronic drums and swirly synths were a pleasure to watch and Winter’s knob twiddling finished it off very nicely indeed. I noted to myself, “there’s a funky Cabs influence going down here” as in the dance phase of Cabaret Voltaire. Little did I know it, but I myself was ahead of the game. The guys worked their way through the album and there were additional thoughts of Kraftwerk, Telex, Cabaret Voltaire and Yellow Magic Orchestra. Then we arrived at the final number before the encore ‘Safe And Sound’. Jeeezuss, I’ve wanted to hear this live since I had it continually on repeat when it first came out! It blends Grant’s dreamy vocal prowess with electronics in a way that seriously reminds me of when I first heard The Beloved’s ‘The Sun Rising’ and all of its associated mixes. Legendary stuff. It was worth coming out just to hear this song live! It couldn’t really get any better than that, could it? Interestingly enough Kincaid this year had done a remix of the track which you can enjoy HERE.

Wrong! They reappeared for just the one number. A number that lasted seven minutes. A number that I will remember for the rest of my life! On hitting the first few notes, I thought, nooooo can’t be, surely not, but my body was telling me otherwise. I had a serious case of the tingles where the hairs on my arms and back of the neck and God knows where else were standing on end and I wasn’t cold. Yes! Yes! Yes! They ARE playing ‘Sensoria’ the 1984 single by Cabaret Voltaire. I had travelled up to London to see The Cabs back on 12th February 1986 and I don’t recall them playing the tune and now here it is! I noted that the chap to my left in The Old Market was recording it on his phone. I spoke to him afterwards, saying that I hoped that he was going to put it up on YouTube……..and HERE IT IS. I pray it doesn’t get taken down.

This had become one of the very best gigs over the past few years and I would seriously suggest to anyone that enjoys synth music to check out Creep Show. 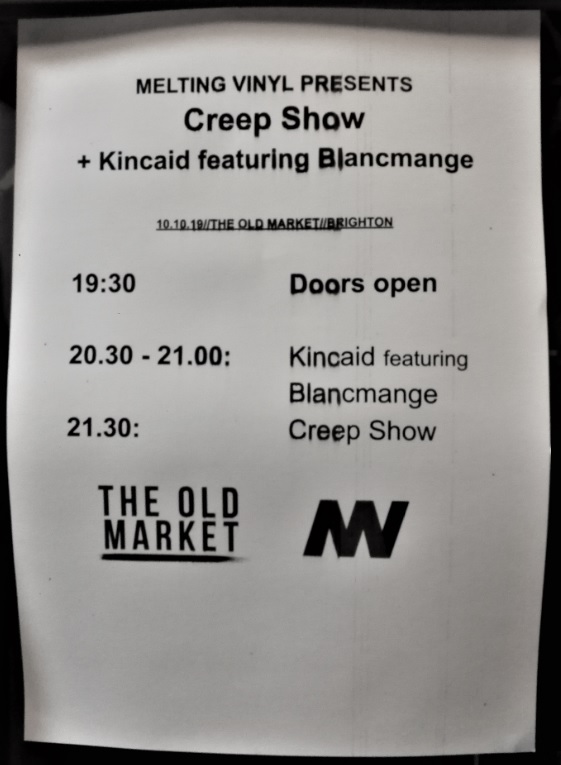 My concert tickets: Blancmange ticket number 001 from 1982 and Cabaret Voltaire from 1986