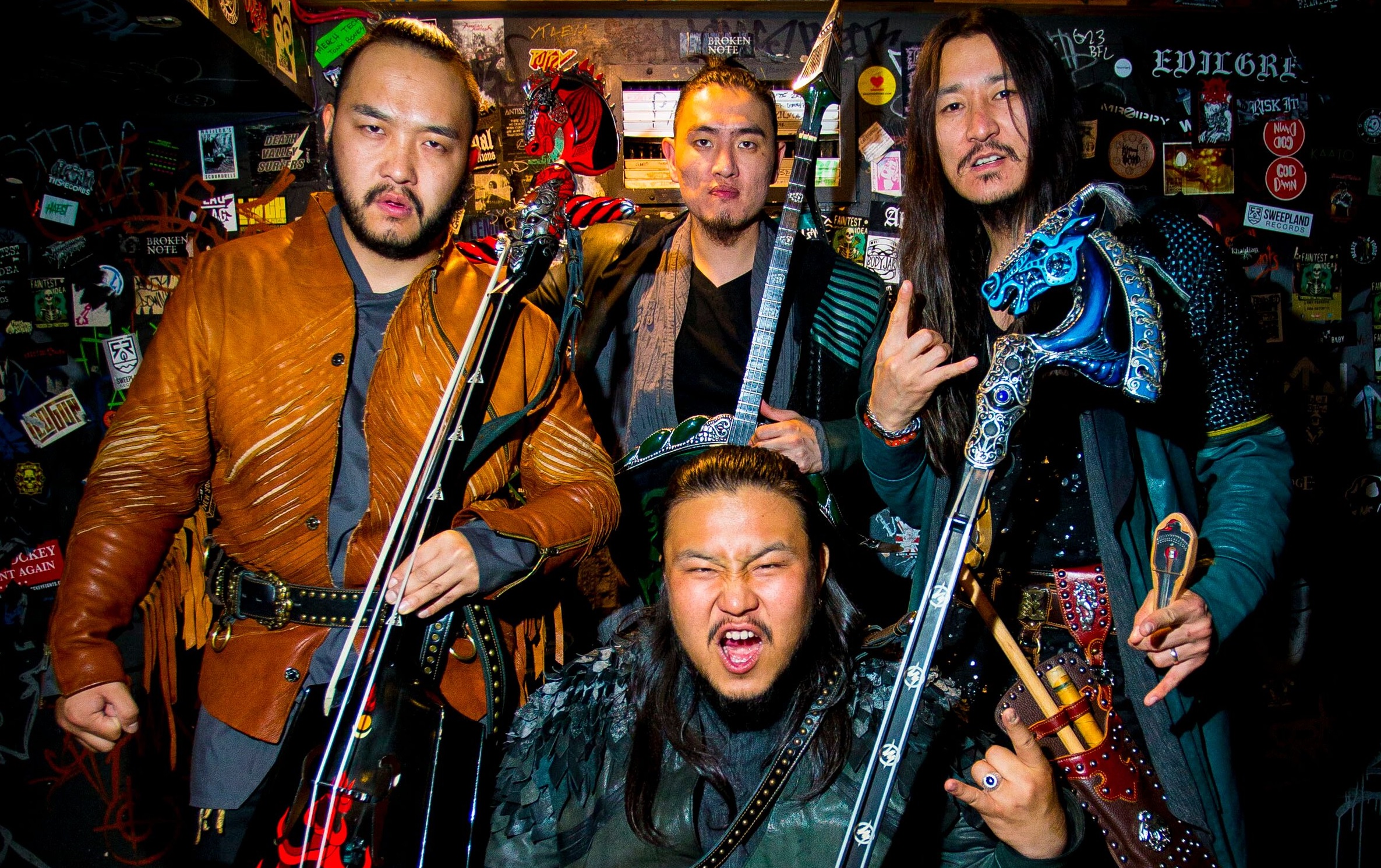 The HU are heading to Brighton (pic Emily Bigg)

The Mongolian Hunnu-Rock phenomenon, The HU, who combine traditional Mongolian instrumentation and throat-singing with modern heavy rock, have announced tour-dates throughout the UK and Ireland for early next year, February 2020.

This year the band made their UK live debut as part of a sold-out 23-date European summer tour, which included packing out a tent at Download Festival. THE HU’s very first performance took place in the band’s hometown of Ulaanbaatar, Mongolia in June 2019.

On September 11th, The HU embarked on their debut North American tour with a sold-out show in Minneapolis. The 57-date tour takes place over the course of three months through December 7th, 2019. To date, 12 shows have sold-out and many upgraded to larger venues due to high-ticket demand.

Catch THE HU on tour in the UK & IRL next year, with tickets are on sale. Dates as follows, with ticket links:

Their debut album ‘The Gereg’ is out now via Eleven Seven Music and expected to be the first Mongolian band to enter the UK Top 40. Order ‘The Gereg’ digitally HERE and on CD or Vinyl HERE.

The album’s title, ‘The Gereg’, takes its name from the term used for the first diplomatic “passport” issued by the Mongol Empire during the time of Genghis Khan. The Band believe this album is their passport to the world and will allow them to travel sharing their music. The USA and forthcoming UK and European tour dates will give them a chance to have their ‘Gereg’ stamped in many countries.

‘The Gereg’ contains viral sensations ‘Yuve Yuve Yu’ and ‘Wolf Totem’ which have racked up over 40 million views to date! It also has hits including newly released track ‘The Great Chinggis Khaan’ (click HERE to view) about the story of Chinggis Khaan as he is portrayed in Mongolian culture – an inventor and a founding father of the country, rather than the worldly view of him as a warrior and conqueror – and live favourite ‘Shoog Shoog’.
THE GEREG Tracklisting:
1. ‘The Gereg’
2. ‘Wolf Totem’
3. ‘The Great Chinggis Khaan’
4. ‘The Legend Of Mother Swan’
5. ‘Shoog Shoog’
6. ‘The Same’
7. ‘Yuve Yuve Yu’
8. ‘Shireg Shireg’
9. ‘The Song Of Women’ 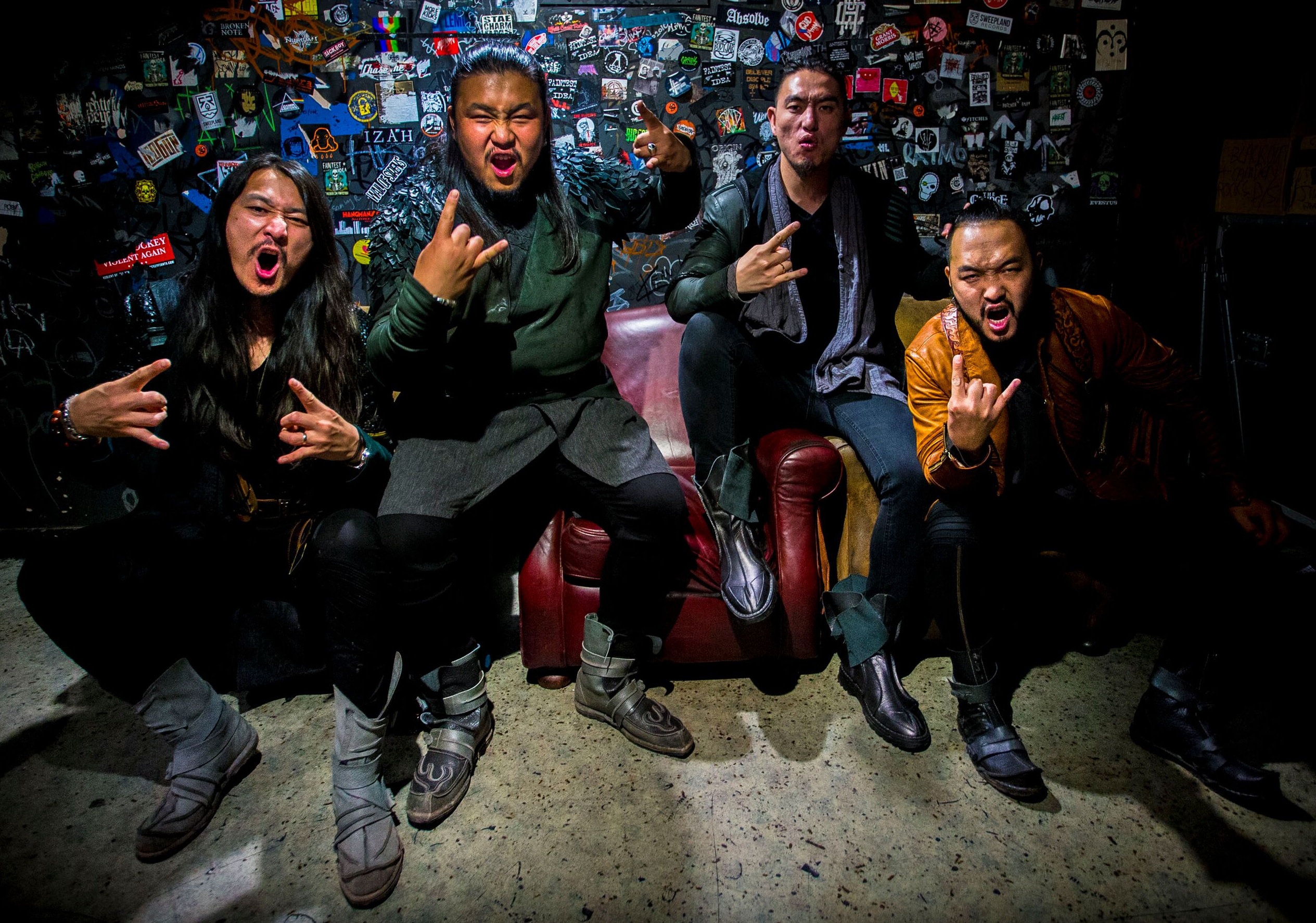 “[The HU] are not just taking elements from Western music… Instead, they’re using some of these elements and making their own authentic music. So it’s not rock music performed by Mongolians. It’s Mongolian rock music.”– NPR

“You know when you find an artist you’re so enraptured and excited about that you want to tell anyone and everyone who’ll listen about them? That’s how I feel right now about The HU.” – The Independent

“The Hu is the first act since Bad Wolves in February 2018 to top Hard Rock Digital Song Sales with its first charting song.” – Billboard

“The HU wound up with nine cinematic songs that seamlessly meld their influences, often highlighting the areas where the two overlap… Given the global platform they earned via YouTube, The HU have an entire nation rooting for them with The Gereg.” –Revolver

THE HU stands for the Mongolian root word for human being, inspiring their original style of music that they call ‘Hunnu Rock.’ The band pull Inspiration from the Hunnu, an ancient Mongolian empire better known as The Huns in western culture. Their music is deeply embedded with their ancient culture, even integrating old Mongolian war cries and poetry into their lyrics.

The group was founded in 2016 in Ulaanbaatar, Mongolia by their producer Dashka, along with band members Gala, Jaya, Temka, and Enkush. Together they create rock music with traditional Mongolian instrumentation such as the Morin Khuur (horsehead fiddle), Tovshuur (Mongolian guitar), Tumur Khuur (jaw harp), guttural throat singing built around the pillars of heavy rock: distorted guitars, bombastic drums, and aggressive rhythms. All four members have earned a bachelor’s or higher degrees in classical music and have gained several years of touring experience throughout Asia and the Pacific Rim. 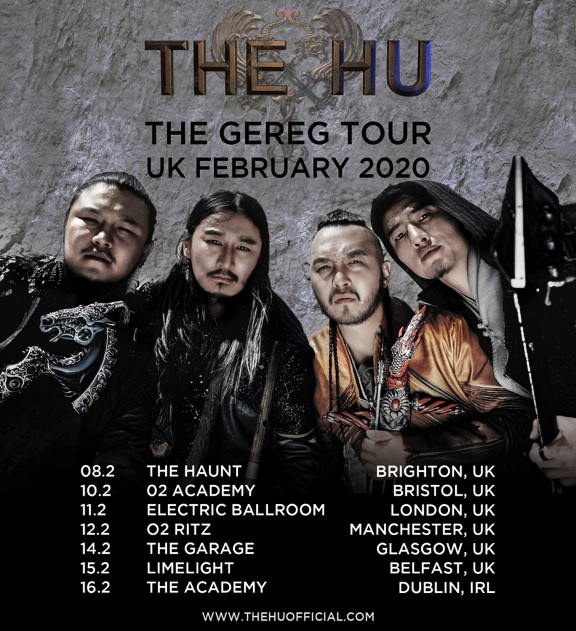