She Drew The Gun…and we had it covered! 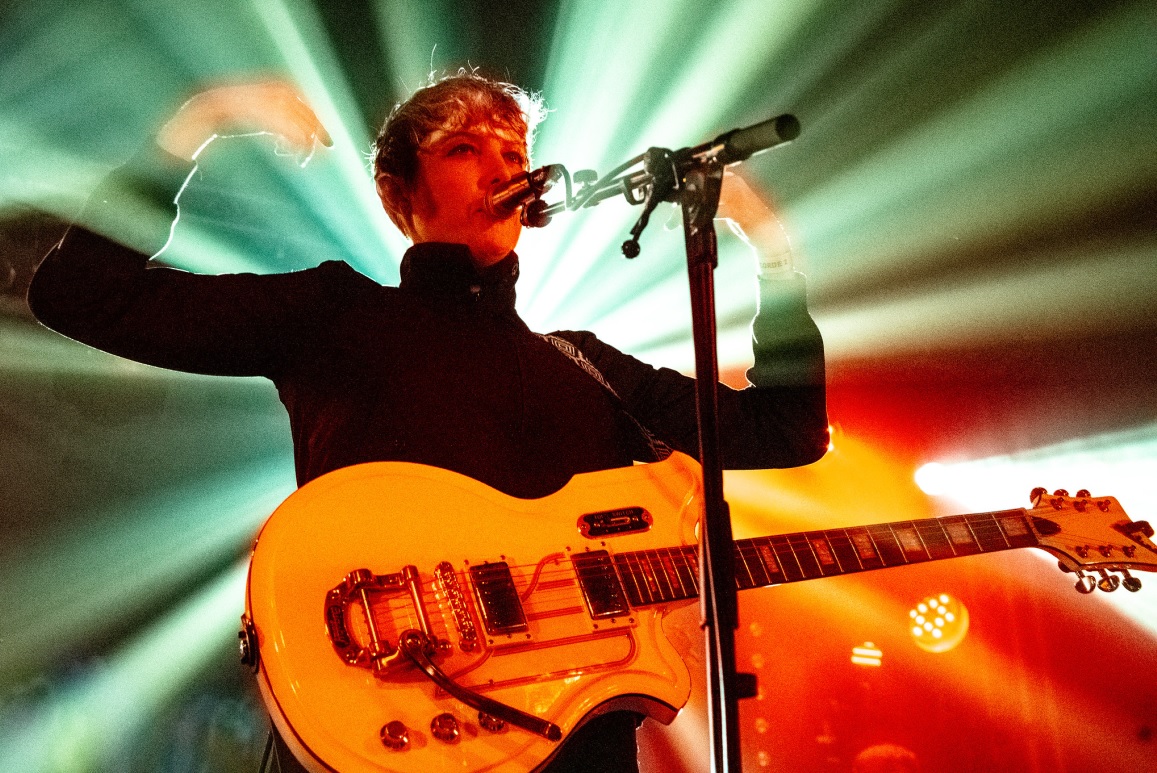 She Drew The Gun live at the Concorde 2, Brighton 24.10.19 (pic Sara-Louise Bowrey Photography)

She Drew The Gun …and we most certainly had it covered! The Brighton & Hove News Music Team were out in force tonight at the Concorde 2 in Brighton in order to witness another highly entertaining concert put on by local concert promoters Love Thy Neighbour. 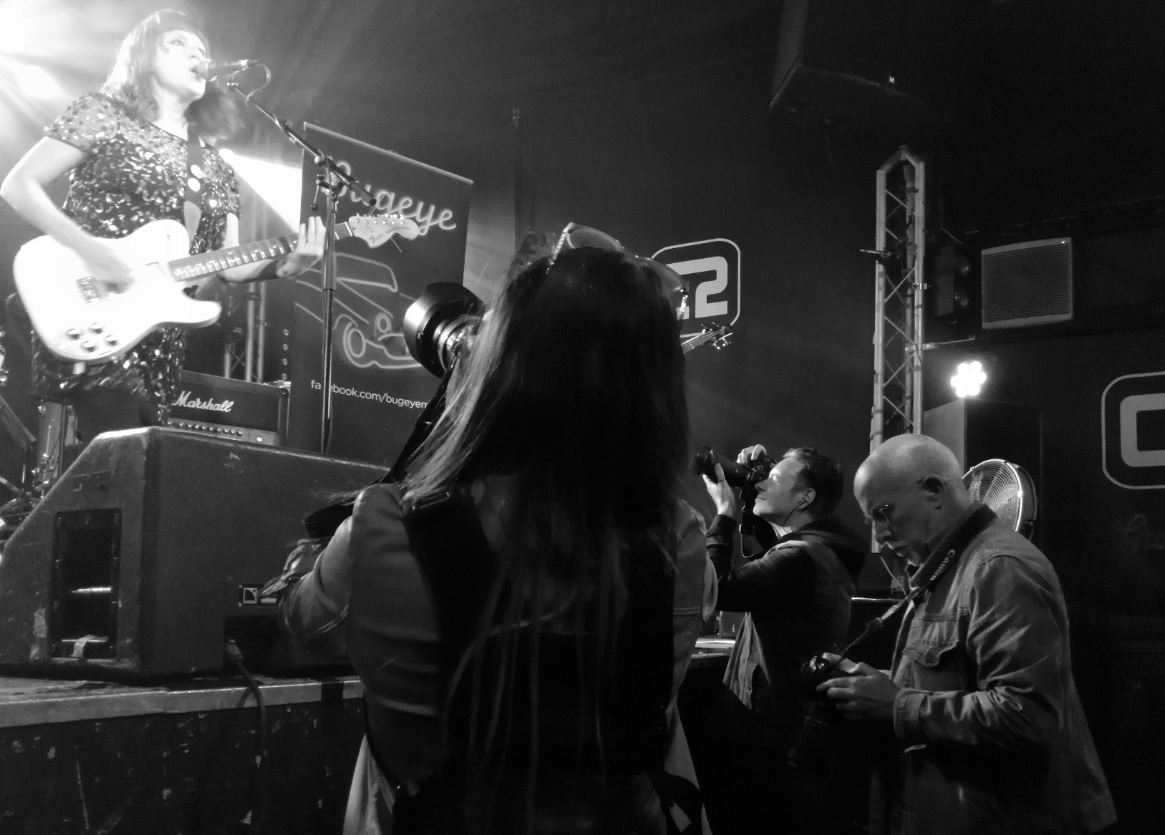 Over the past few years, we have witnessed this promoter pluck out names from total obscurity and put them on locally in Brighton in the smaller venues in town and then we’d go along and often be more than pleasantly surprised by what we have seen and heard. We certainly aren’t alone in our thinking as ‘word gets out’ on these new discoveries and then they return to town a few months later, but appear in a larger capacity venue, and then again a while afterwards at an even bigger venue. Tonight is one such case…..enter She Drew The Gun!

We were first aware of the lyrically evocative songwriting and politically charged work of singer-guitarist Louisa Roach aka She Drew The Gun back in 2016, when she popped up at The Prince Albert on 18th October 2016, around the time of the debut album release ‘Memories Of Another Future’ and she also won Glastonbury’s Emerging Talent competition in the same year. Then Love Thy Neighbour puts Louisa and her mates on at Patterns on 8th March 2019, (which was the closing date of her eleven date tour) and it sold out in super-quick time. The morning after that gig, a return date was set with an upgrade to the Concorde 2. Clearly SDTG’s career is moving in the right direction. 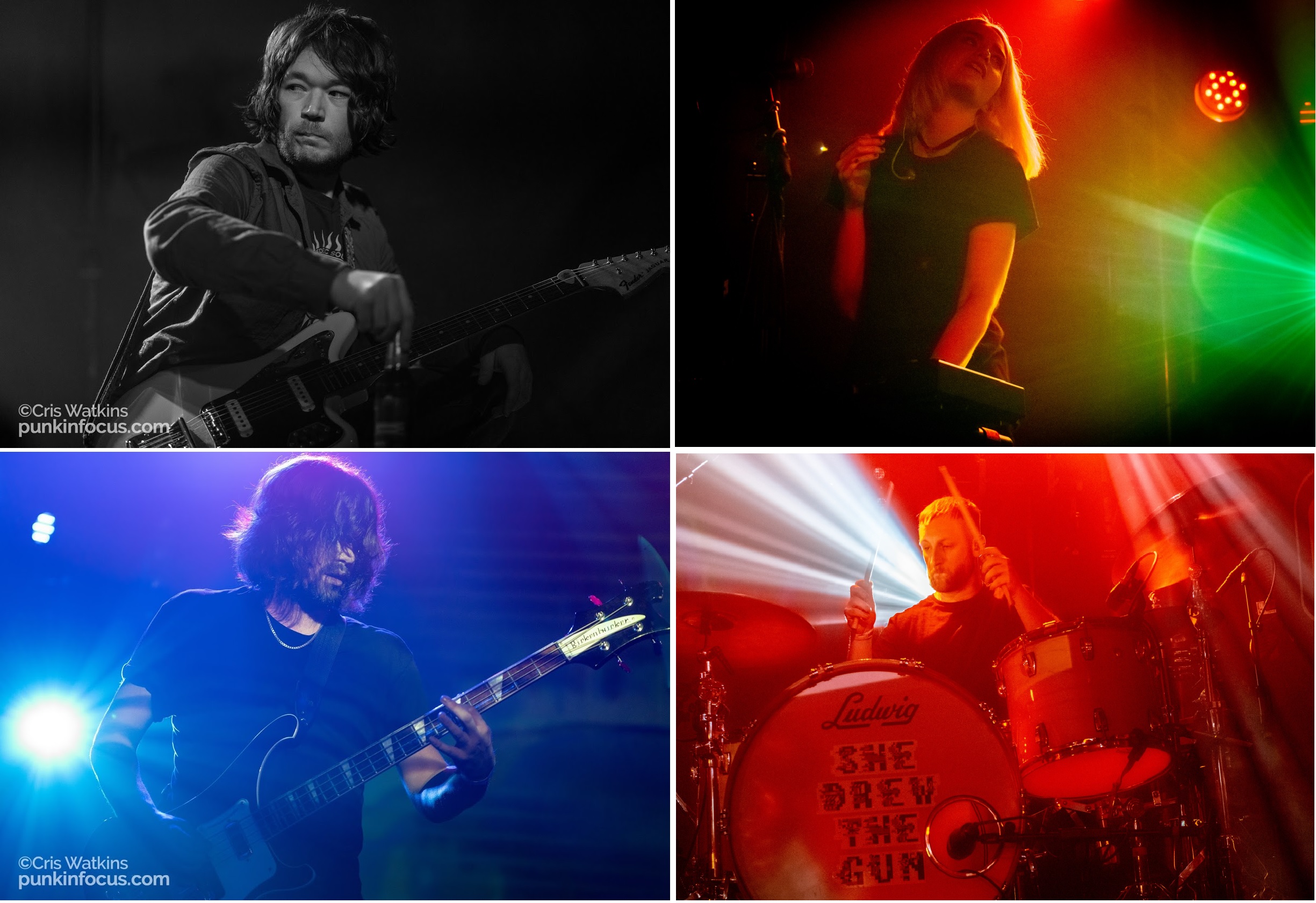 The second album ‘Revolution Of Mind’ came out on 5th October 2018 on Skeleton Key Records and was at the time constantly stuck in my car CD player! If there’s a central theme to this record, it’s liberation, in various guises: “Empowerment; resisting; arming yourself with knowledge; questioning the status quo, questioning your own state of mind and how its affected by the systems we live in,” explained Wirral-born Louisa at the time.

Louisa drew inspiration from the likes of underground folk legend Malvina Reynolds, Manchester poet Toria Garbutt, and contemporary voices like Kate Tempest, Nadine Shah and Courtney Barnett. “I crave music that says something, music that goes beyond simple love songs” she said at the time.

Louisa believes art and imagination offers us a way out of the system and the struggle, influenced by sci-fi visionaries like Kurt Vonnegut and Marge Piercy, authors who urge us to dream the futures we want into being. ‘Revolution of Mind’ is her contribution to our collective dreaming, an electric collection of songs that urge us to meditate on “the present, the past and the future; possible worlds; solidarity; love; and peaceful, artful, revolutionary practice.”

Louisa started playing guitar at 13 and was soon performing covers at friends’ parties. However, making music was a passion that fell by the wayside as teenage life and, a little later, motherhood took over. “Having my son meant I had to try and get my s**t together,” she says. “Before that I’d spent time out of work and in low-paid s**t jobs that I hated.”

She moved across the Mersey to Liverpool to study for a degree in Psychology as a mature student. It was during this period that she picked up the guitar again, and has certainly not looked back since.

Tonight, the Concorde 2 was rammed with an eclectic mixed age crowd and as soon as the heavy keys intro music struck up and the five piece outfit all clad in black wandered on stage, it was obvious by the general vibe that this was going to go rather well.

Behind the quintet there was a flow of arty films on display, which quite often were of a political and topical nature, such as accepting migration. I think that Louisa informed us these visuals were being controlled by Dawn.

We were treated to no less than 20 tunes by Louisa and her band, with many of these spanning across various musical genres. We had everything from wordy rap to country rock, but all of them were delivered with gusto and bags of emotion from Louisa. At times her vocals were in the same ballpark as Amy Winehouse, a photo of which was at one stage projected on the screen behind the band, along with photos of many other inspirational women that have inspired Louisa and no doubt countless thousands of other women down the years.

She dedicated the country tinged ‘Where I End And You Begin’ to herself after caning it in the past. They must have performed virtually everything that she has ever released and was an extensive and eclectic set. I noted that at certain times during the performance that the drumming was certainly of the highest order and that during one of the tunes that the relatively young female keyboardist switched to Louisa’s guitar, whilst the frontwoman poetically waxed lyrical.

We enjoyed a majority of the set, but not every number, with the solo ‘Human’ being the weakest on the night, but not long after we were treated to a cover of the Beloved’s hit ‘Sweet Harmony’, which was a surprise and one of the highlights of the night. The crowd were most appreciative tonight and hung on every word that was delivered in a broad Merseyside accent by Louisa. At this rate she will be back next year and playing at Brighton Dome Concert Hall. 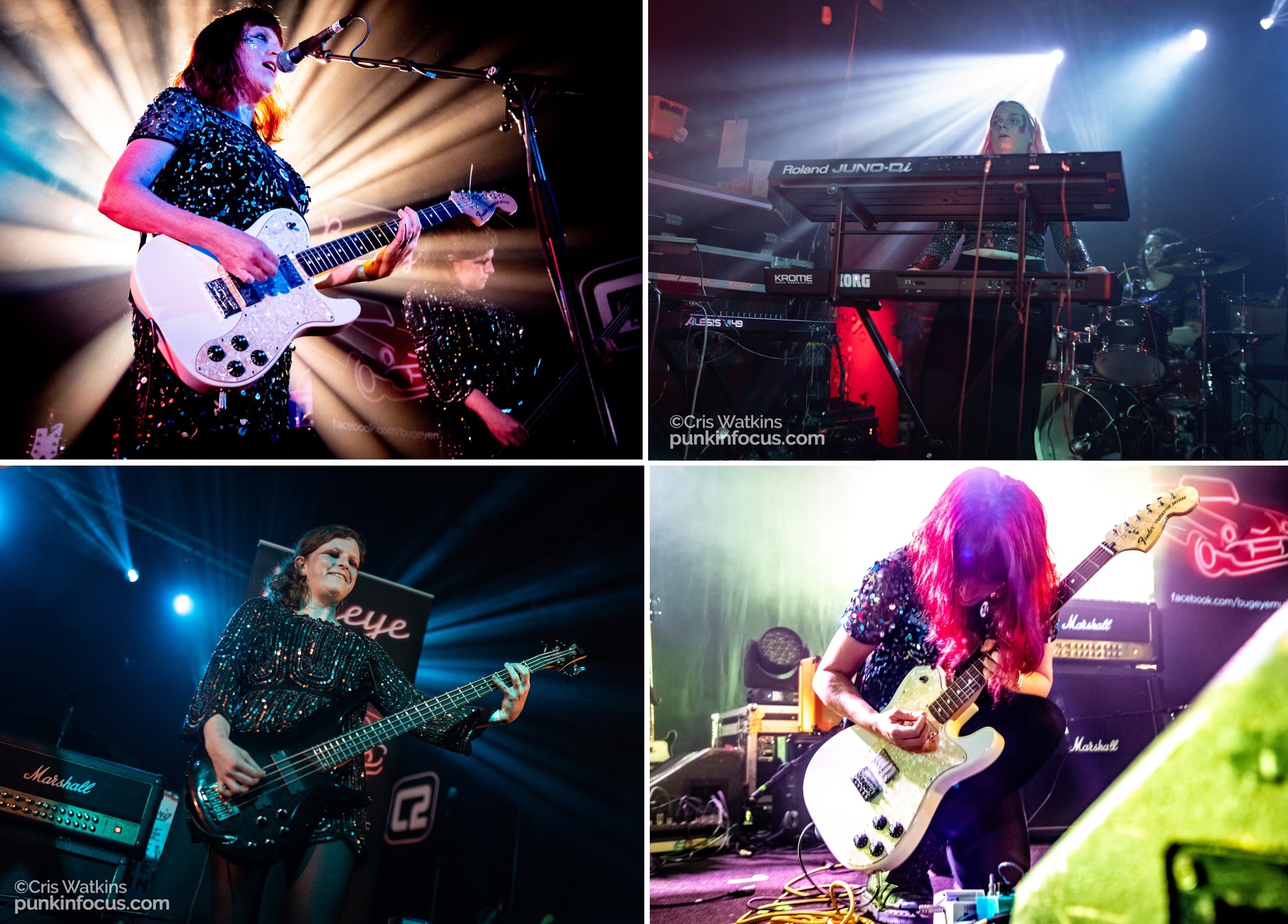 There was no chance of anybody missing this act as they were all sporting matching sparkly outfits and were certainly in the disco groove with lusciously decent chugging beats at times. They are purveyors of bouncy rhythms with loud gritty vocals atop. The Roland Juno and Korg synths reminded me of Blondie’s disco phase, which seems to be an accurate analogy, as the band refer to themselves as thus “If Debbie Harry, Jimi Hendrix, Kate Bush, and Keith Moon had been kidnapped by vegan aliens and bred, sometimes being tortured with hot poky things, in the pursuit of the ultimate rock & roll sound, the result may have sounded a little like this. Blending cherry-liqueur lyrics, bubblegum-kneecap bass electrics, goth-heavy drum compactions and hi-rise guitar sculptures, maybe one day all music will sound this good” – and there you have it.

They certainly enjoyed themselves during their 8 tune set, which included their forthcoming new single ‘Electric’ which is due to drop on 29th November. They posted this on social media “THANK YOU BRIGHTON!!! That was absolutely amazing. Huge thanks to everyone who came to see us play and those that have newly discovered us. We had such an awesome time. Thank to @shedrewthegun @lovethyneighbr @concorde2 for having us”. 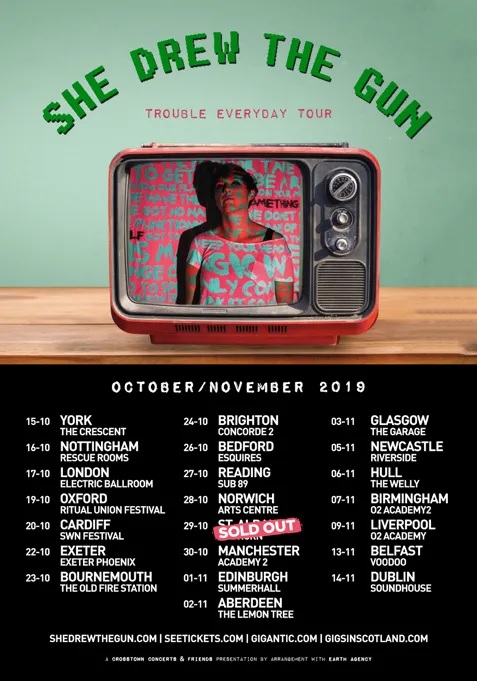 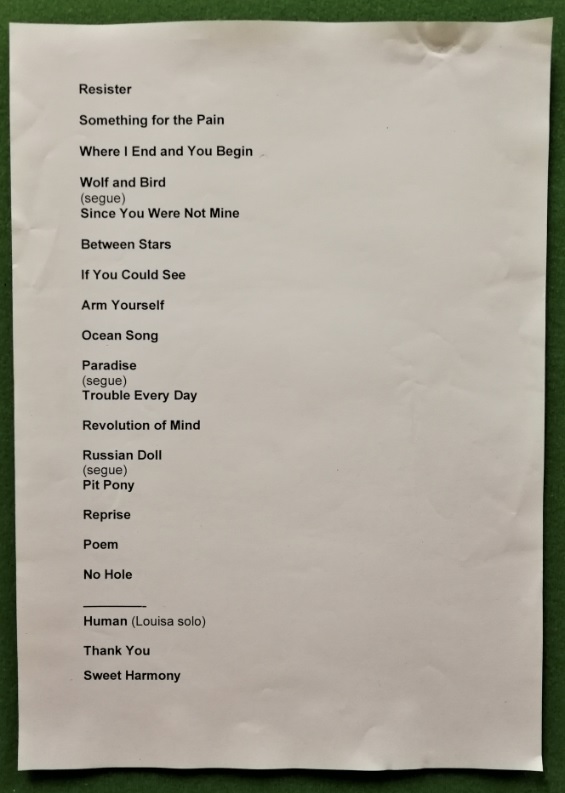 She Drew The Gun setlist 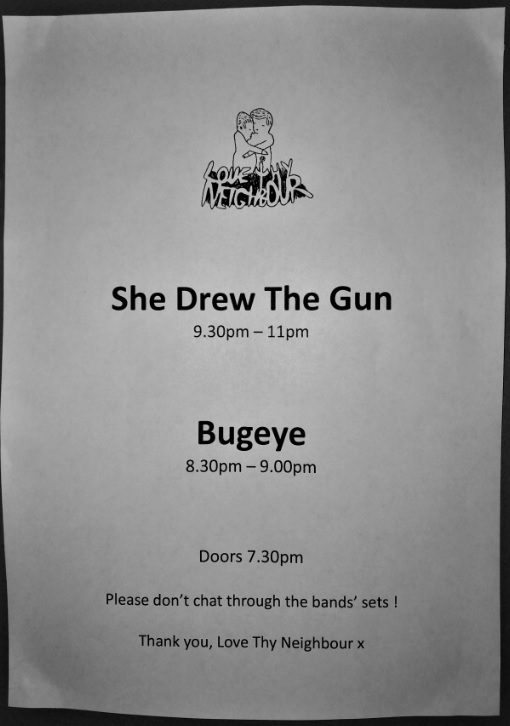