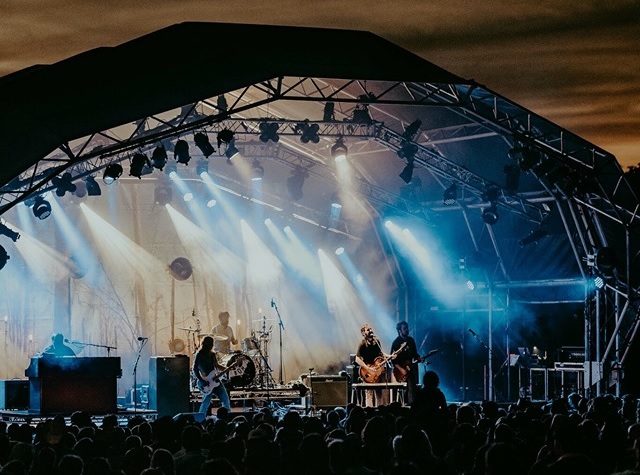 Award-winning Black Deer Festival have announced the first 14 artists on their bill for 2020. The event runs across three days – 19th, 20th and 21st June. From established and legendary acts to fresh, exciting newcomers, the line-up for next year’s festival is an eclectic and diverse mix of incredible talent from the world of Americana, Folk, Country and beyond. Check out the 2019 festival highlights video HERE and the 2018 festival highlights video HERE.

Bringing together all elements of Americana and country, Black Deer Festival goers can fully immerse themselves in the community, music, food and storytelling of a culture like no other. Priding themselves on a true sense of community and togetherness, the festival organisers have built on the success of their first two years and are now ready to announce the first wave of artists for 2020. 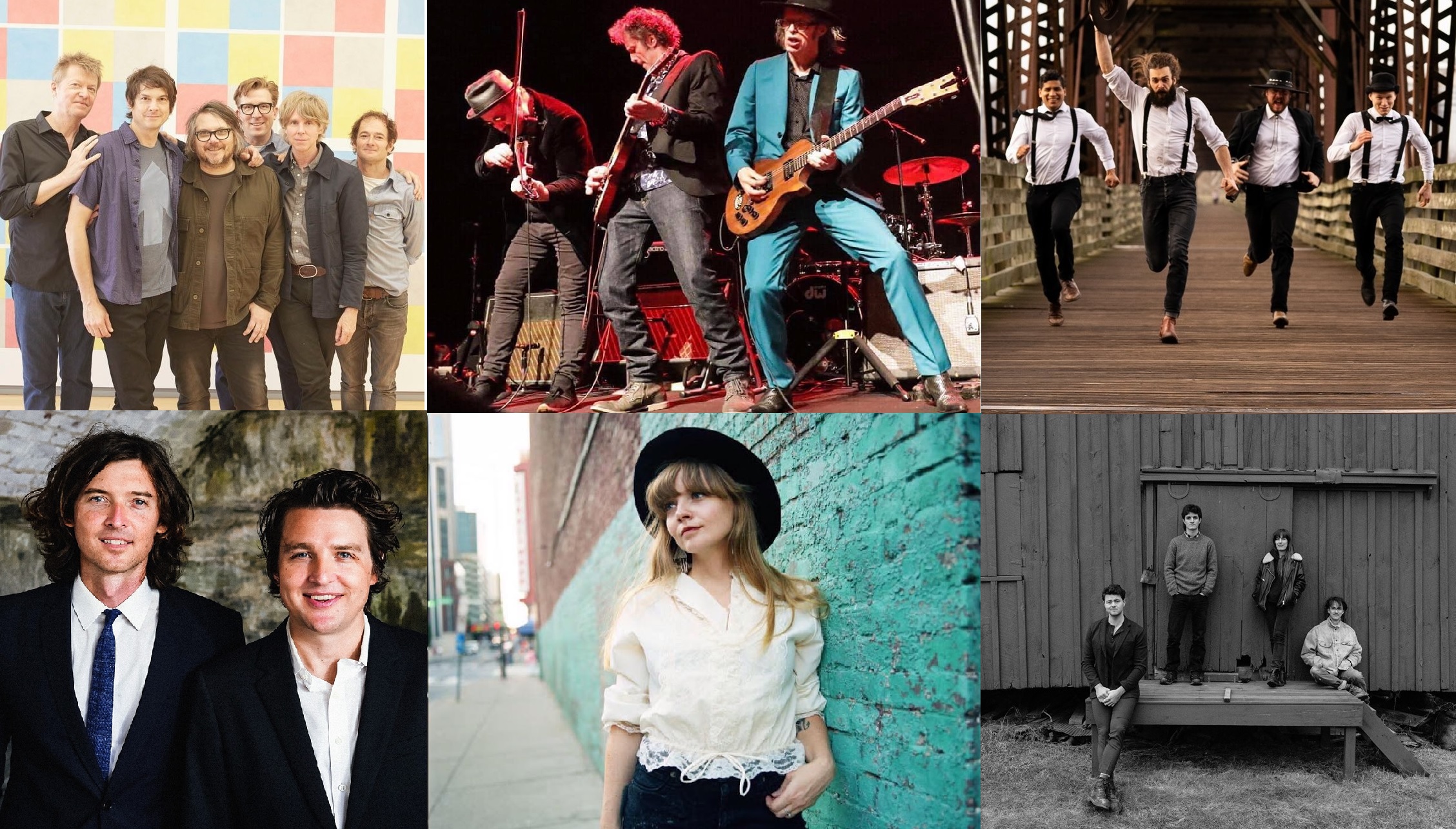 They have announced Wilco as one of the major names topping the festival line up. An exclusive for the South of England, Jeff Tweedy and his influential band of Americana pioneers will bring their American roots and remarkable catalogue to Kent’s very own Black Deer Festival in Eridge Park (Eridge Green, south of Royal Tunbridge Wells, Kent, TN3 9JT). With new album ‘Ode To Joy’s released in October this year leaving nothing but a moving and lasting effect on all those in the music world and beyond, it’s clear that this exclusive set promises to be an ‘I was there’ moment for years to come and a highlight of the 2020 festival season.

Alongside this, Black Deer are honoured to have legends The Waterboys grace their stage. From 1985’s ‘This Is The Sea’ album with its chart-conquering monster hit ‘The Whole Of The Moon’, to 1988’s seminal, million-selling and influential ‘Fisherman’s Blues’, through until their critically-acclaimed 2019 release ‘Where The Action Is’, the band are known for their genre-hopping impressive mix of roots-rock music. Led by visionary Mike Scott, The Waterboys are as electric as ever and have been getting rave reviews for recent live performances, back on the road following a slew of albums recorded in Nashville, Tennessee.

Canadian folk and bluegrass ensemble The Dead South will be bringing their gritty banjos and guitars back to Black Deer following their show-stealing 2019 performances. A band that stay true to fans, the collective is known for their partnerships with ethical ticket sellers and ultimately helping fans fight against the secondary ticket markets. After releasing their third album ‘Sugar & Joy’ in October this year and extensively touring at iconic venues and festivals in both Europe and across the US, the electrifying four-piece are at the ready to put on one of their most captivating performances yet.

Grammy nominated folk duo The Milk Carton Kids will be heading down to Black Deer from Eagle Rock, California. Previous winners of the Americana Music Association Group of the Year, the duo toured alongside Mumford & Sons earlier this year as well as other acts such as Emmylou Harris and John Prine. With comparisons to Simon & Garfunkel, their comedic personalities and breath-taking vocals, they are a perfect fit for the Black Deer bill.

Another artist visiting from across the pond is Arizonian Courtney Marie Andrews, leaving her hometown at only 16 she toured and travelled relentlessly which ultimately inspired her breakthrough album ‘Honest Life’. The singer-songwriter has reached new depths in terms of her sound, songwriting and even bravery – drawing on inspiration from Motown, Soul and Rock music.

From New York City Subway gigs in the early days to performances at Bonnaroo Festival and massive headline tours, New York natives The Felice Brothers have also been announced for Black Deer. The collective came back in 2019 with album ‘Undress’ where the band addressed serious and political topics while staying playful and upbeat.

Americana duo The Secret Sisters will bring their sweet harmonies to the festival this year. The sister’s tragic yet inspiring story led them back home to Alabama, here they delved into songwriting which ultimately turned into the creation of ‘You Don’t Own Me Anymore’ – a powerful and poetic album which is haunting yet gorgeous.

UK Blues sensation Jack Broadbent will be making his Black Deer debut. Bringing his gritty vocals and unique slide guitar playing (with a hip-flask!), Jack will have the crowd up and dancing throughout his set. Jack has been hand-picked to support Ronnie Wood on his forthcoming UK dates.

Back by popular demand is fan favourite Irish Mythen. Born in Ireland, and now a resident of Prince Edward Island, Irish is now one of the leading artists on the Canadian folk scene. Her music and songs are enhanced by her banter in between. Always one to make the crowd laugh, Irish is welcomed back to Eridge Park following her appearances across pretty much every stage last year!

Madison Violet is a Juno-nominated Canadian music duo composed of singer-songwriters Brenley MacEachern and Lisa MacIsaac. The Torontonian group are notable for being nominated for both folk and pop awards.

Juno award-winning contemporary trio The East Pointers will be in attendance, also travelling all the way from Canada after just releasing their latest album ‘Yours To Break’ in October 2019. The band infuse Celtic influenced original songs with modern influences to create their unique and charming sound – redefining the ever-evolving genre of folk music.

The last couple of years have seen Midnight Skyracer tearing up the bluegrass and folk scene here in the UK. Consisting of five ladies who show nothing but charisma, charm and of course exhilarating vocals, they have toured the UK and Europe extensively, leading them to become one of the first UK bands to gain recognition in the International Bluegrass Music Association’s Momentum Awards with a nomination for Best Band.

Amy Montgomery will be making a return to Black Deer in 2020 bringing her captivating performance and raw vocals. Channelling Janis Joplin, her voice is powerful and atmospheric with modern and unique undertones. Her recent touring along with a string of festival performances has led her to critical acclaim from some of the most credible people in the industry.

Folk Rock duo Native Harrow will be in attendance from Pennsylvania to put on a soothing yet thrilling set. Devin Tual spent almost two decades of rigorous training in ballet, theatre and voice – then she finally decided to break away from academia and write from her heart and find her true voice. Leading to the Joni Mitchell and Laurel Canyon-esque feel of most recent album ‘Happier Now’.

Founders of the Black Deer Festival, Gill Tee and Debs Shilling are thrilled to be announcing the first artists: “We’re both so excited to reveal the first set of artists for Black Deer 2020. We’ve listened closely to the passionate Black Deer audience and are proud to be bringing them not only the artists they already love, but artists they’re going to love. The loyalty our fans have shown us is just incredible and we’d like to thank everyone who bought a ticket without even a single name being announced! Heading into our third year, there’s an ever-growing sense that we’re building something very special and our team are working hard to deliver the best Black Deer Festival yet. There’s established names such as Wilco and The Waterboys, returning heroes like The Dead South and Irish Mythen and exciting emerging talent in Courtney Marie Andrews and Native Harrow in this first announcement. We can’t wait to add to this great line-up over the coming weeks and months and are looking forward to seeing everyone enjoying the atmosphere in our spectacular deer park next June!” 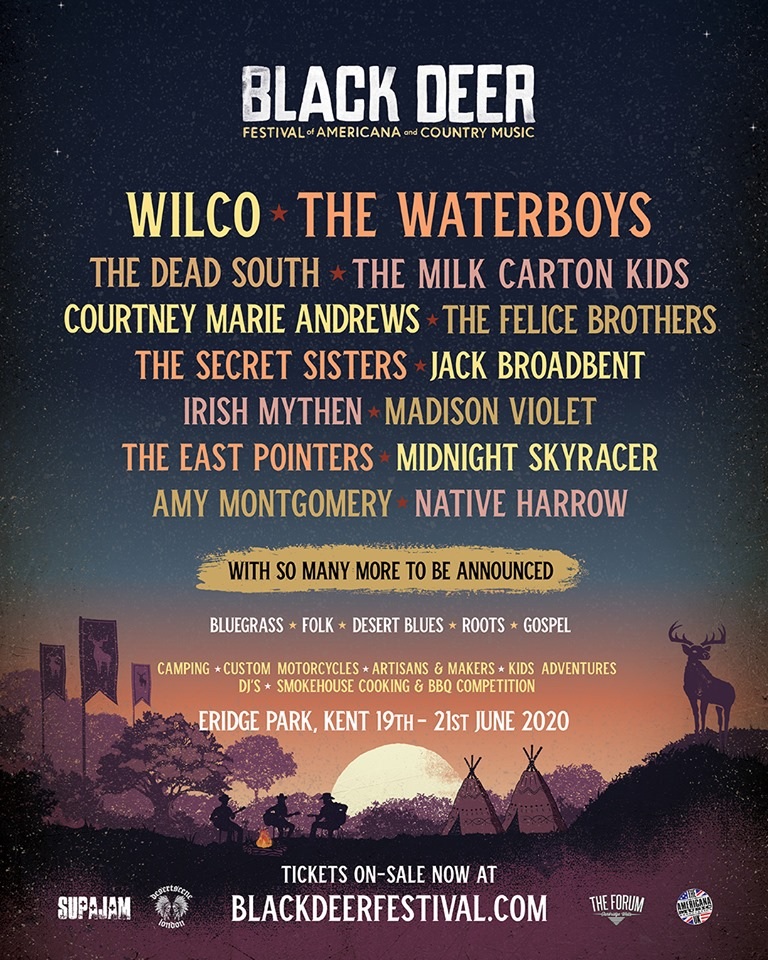