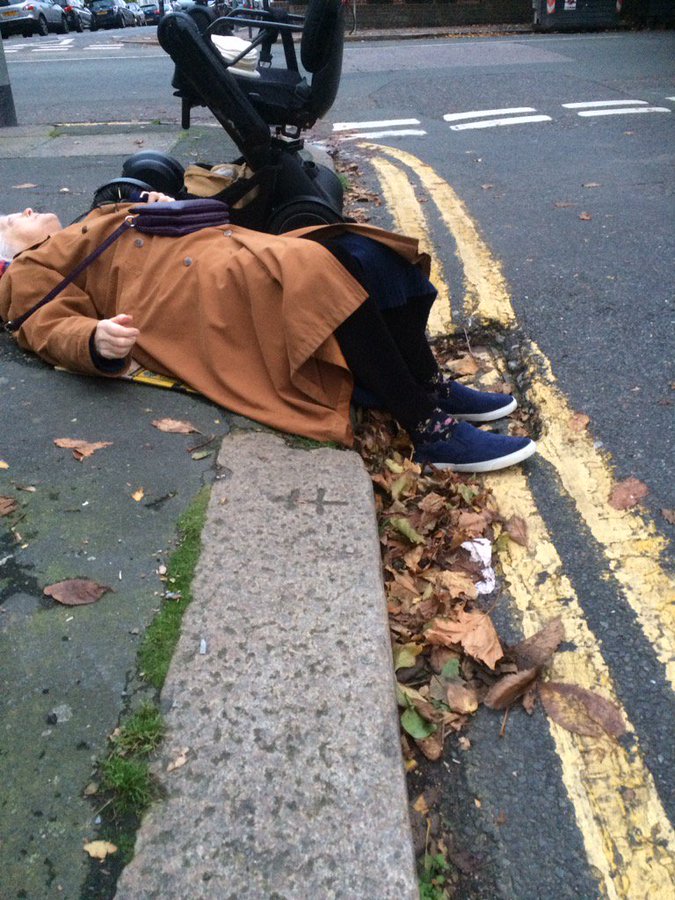 A veteran community campaigner is demanding the city council move a “deathtrap dropped kerb” after she broke her pelvis when her mobility scooter slipped there.

Valerie Paynter, 73, was riding along Sackville Road when her new scooter slid off the kerb at the junction with Livingstone Road and tipped over last Wednesday afternoon.

Since then, she has been at the Royal Sussex with two breaks to her pelvis – but to add insult to injury, when she tweeted the council about it today, its Parking and Transport account replied suggesting the photo above was staged.

The kerb is next to a storm drain, and successive resurfacing of the road has raised the tarmac, creating a deep drop into the drain.

Valerie said: “The road goes straight down into that drain in a really steep way.

“It dips right down into a hole and it takes up quite a lot of the dropped kerb.

“I thought I had my scooter lined up so I could make it. But my chair got over sideways and tipped over straight into that drain.”

Passers-by came to help with blankets and one young woman, a physiotherapist called Saffie, stayed with her until the ambulance came.

Valerie said: “When I got my chair in September I had no idea what I was going to be up against. I’ve lived here since 2002 and even when I was walking with a stick I struggled to get over that kerb.

“People keep saying I should sue the council, but I would rather not sue them, I would rather make a deal with them where they fix this dropped kerb.”

A council spokesperson said: “We were extremely sorry to hear of Ms Paynter’s accident and have apologised for the insensitive and inappropriate tweet which suggested that it was ‘staged’.

“We are taking this issue very seriously and have arranged for the kerb to be inspected as a matter of urgency. We have been in touch with Ms Paynter to discuss her accident further and wish her a speedy recovery.”