Brighton embarks on journey to a car-free future

Councillors steered Brighton a step closer to being car-free in the centre at a meeting this afternoon (Tuesday 21 January).

They voted unanimously for an official report on how to create a car-free city centre within three years.

A Green motion, backed by the ruling Labour group and the Conservatives, called on Brighton and Hove City Council to follow the example of others such as York.

Councillor Amy Heley proposed the motion requesting a report to explore “the feasibility and costs of developing a car-free city centre by 2023”.

The Green councillor’s motion also called for the report to “detail costs and practicalities (and) rules for exemptions for those with accessibility needs and some trades vehicles for example”.

She urged the council to use an “ultra-low emission zone for private vehicles in the city centre (to) act as a transition to a car-free city centre”.

She mentioned the council’s proposed “city climate assembly” and, to applause from the public gallery, she said: “Brighton and Hove is a forward-thinking city and we need to follow the examples of other European and British cities.

“We need to work in parallel with the ‘city climate assembly’ as we want to hear from everyone in the city on this and find out the best way forward.”

Councillor Heley said that nitrogen dioxide (NO2) was at dangerous levels in the centre of Brighton and that 54 people died prematurely each year as a result.

She added: “We need bold and ambitious policies to achieve the council aim of becoming carbon-neutral in 2030. We need to look into transport use. This is a matter of life or death.”

Conservative councillor Lee Wares said that it was essential that the council made an informed decision and considered the economic impact as this would be critical to the city’s wellbeing.

He said that cities in the vanguard such as York, Bristol and Edinburgh had complete circular park and ride schemes. These allowed visitors and residents to leave their vehicles before going into the city centre.

Councillor Wares said: “This is an opportunity to re-examine everything that we have done. We need to be honest with ourselves and look at all forms of transport and how we are doing things.” 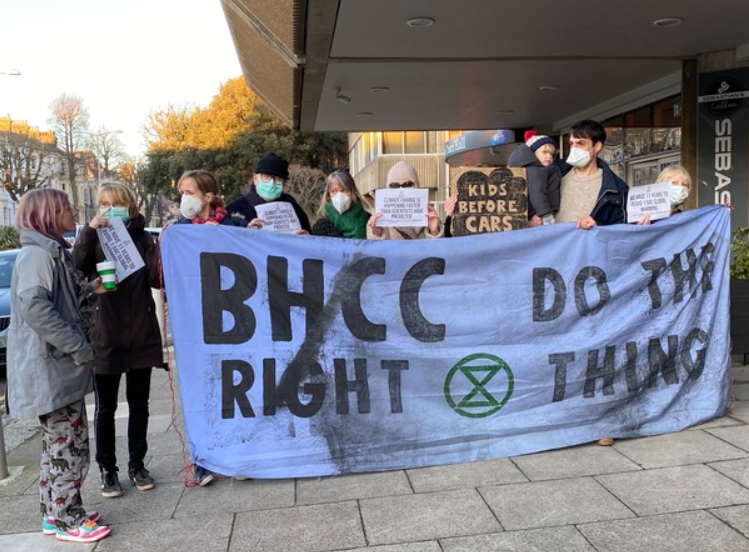 He spoke about parking charges and fines saying that they currently covered the cost of concessionary bus fares and subsidised bus routes.

He added: “If we want our citizens to work with us, we have to convince them we are making sensible decisions.”

Labour councillor Gary Wilkinson also spoke during the debate at Hove Town Hall where campaigners had demonstrated outside before the council’s Environment, Transport and Sustainability Committee met.

Councillor Wilkinson said that there were seven million deaths a year attributed to air pollution – and many more millions people were killed in car accidents.

He said: “While standing in the middle of Brighton’s North Street during the ‘School Climate Emergency’ last year and also in London, with Extinction Rebellion’s protests, the air noticeably cleaner, the area quieter, I was struck by the enormity of the challenge ahead of us.

“We need to create a transport system that is zero-carbon in only a few years.

“The daily reality is still toxic traffic fumes, unjustifiable road deaths and high levels of transport carbon emissions – up to one third of all emissions in many places.”

He said that Copenhagen and Amsterdam were known for their cycling culture and that Curitiba in Brazil had an amazing bus transit system.

He added: “Imagine if public transport was working properly and diesel and petrol cars were banned in urban areas.

“The UK going from a car-owning nation, with about 40 million cars, to around a million – in just five years. We could get those cars recycled and out of our city centres.”

A report is due to come to the same committee on Tuesday 5 May.