Decision due on 30 flats for young people on Brighton estate

Officials are urging planners to approve 30 low-cost homes for young people on a scrap of land behind a row of shops in Brighton.

A decision on whether to grant planning permission for the flats is due to be made by members of Brighton and Hove City Council next week.

The Planning Committee is being asked to back the plans submitted by the YMCA Downslink Group which wants to build on council-owned land in Eastergate Road, Moulsecoomb.

The land – leased from the council for £3.1 million – is behind the Oakendene flats and shops that include a Premier convenience store, Haylea’s Café and the Wine Lodge off-licence. It is also next to the council’s housing offices.

The plans – drawn up as part of the council’s New Homes for Neighbourhoods policy – will be single-occupancy for young people who are able to live independently with low levels of support.

Each flat would include a bed-sitting room, bathroom and kitchen, with half of the tenants moving on from YMCA Downslink supported housing and the other half nominated by the council.

Young people aged 18 to 25 in work, training or education would be able to lease the flats for two years.

YMCA Downslink chief executive Chas Walker said that all those living in the flats would be from Brighton and Hove – and he hoped that a significant number would be from Moulsecoomb.

Mr Walker said: “We do want to reflect the local community in Moulsecoomb and so we are giving a level of emphasis to make sure local young people who come from the community of Moulsecoomb who fit the criteria are able to access the accommodation.

“There’s not a lot of supported housing getting built in this country, like specialist housing for young people. There’s a lot of first-time shared ownership but investment in genuine social housing is very low.

“I feel really proud we are committed to that and investing in that in Brighton where one of the biggest causes of homelessness is young people leaving home in an unplanned way.”

The proposed buildings are four storeys high built from concrete and clad with bricks with the top storey surrounded in zinc sheets.

No parking is included as residents are not expected to own cars. 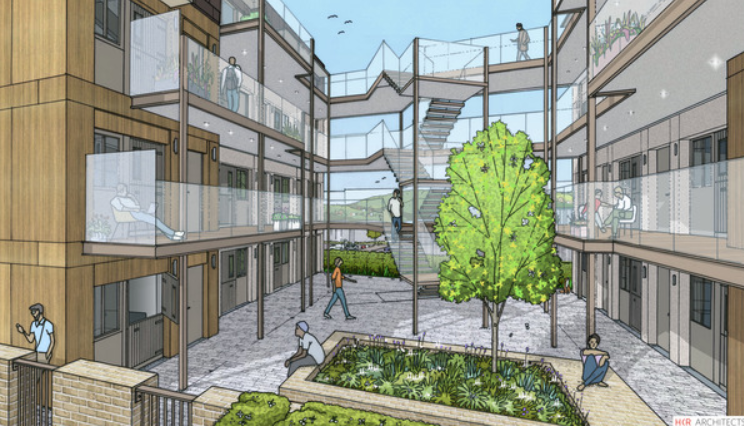 The council has received three letters of objection and one of support for the scheme.

One objector, whose details have been redacted by the council on its website, said: “This is not a good use of the site. Too large and poor-quality design. How are these young people supposed to lead a more independent life if they can’t even cook for themselves?

“Putting them into tiny little rooms is not going to aid their mental health. The design is reminiscent of a prison cell.”

Another objector wrote: “No one in the city wants housing more than me. I fight for it every day but this is totally wrong, putting 30 under 25-year-olds in the middle of a housing estate behind two off-licences and a late-night food outlet is one of the worst ideas I have ever seen.

“It will become a ghetto overnight and many of the young people moving there are recovering from addiction and abuse. I know these people. They deserve much better than this offering.”

The letter supporting the application said: “I can understand some of the reservations of the people already commenting on this proposal but I do feel this development will give a much-needed opportunity to young people to get some affordable housing and help them re-establish themselves in the community with the support of the YMCA.

“There is a real lack of affordable housing for young people in the area and although these units are small it will hopefully provide a good stepping stone and opportunity for these youngsters in the two years or so that they stay there.”

If the application is approved, YMCA Downslink would need to make a £36,000 contribution towards recreation and open spaces in the area.

The charity would also be expected to pay £3,000 towards the “local employment scheme” to increase the job opportunities and training for local people who wish to work in the construction industry.

There would also be expected to be a £13,600 contribution towards improvements to pedestrian routes serving the site, including Moulsecoomb Way.

The Planning Committee is due to meet at Hove Town Hall next Wednesday (5 February). The meeting is scheduled to start at 2pm and should be open to the public.