Superb night of shoegaze in Brighton 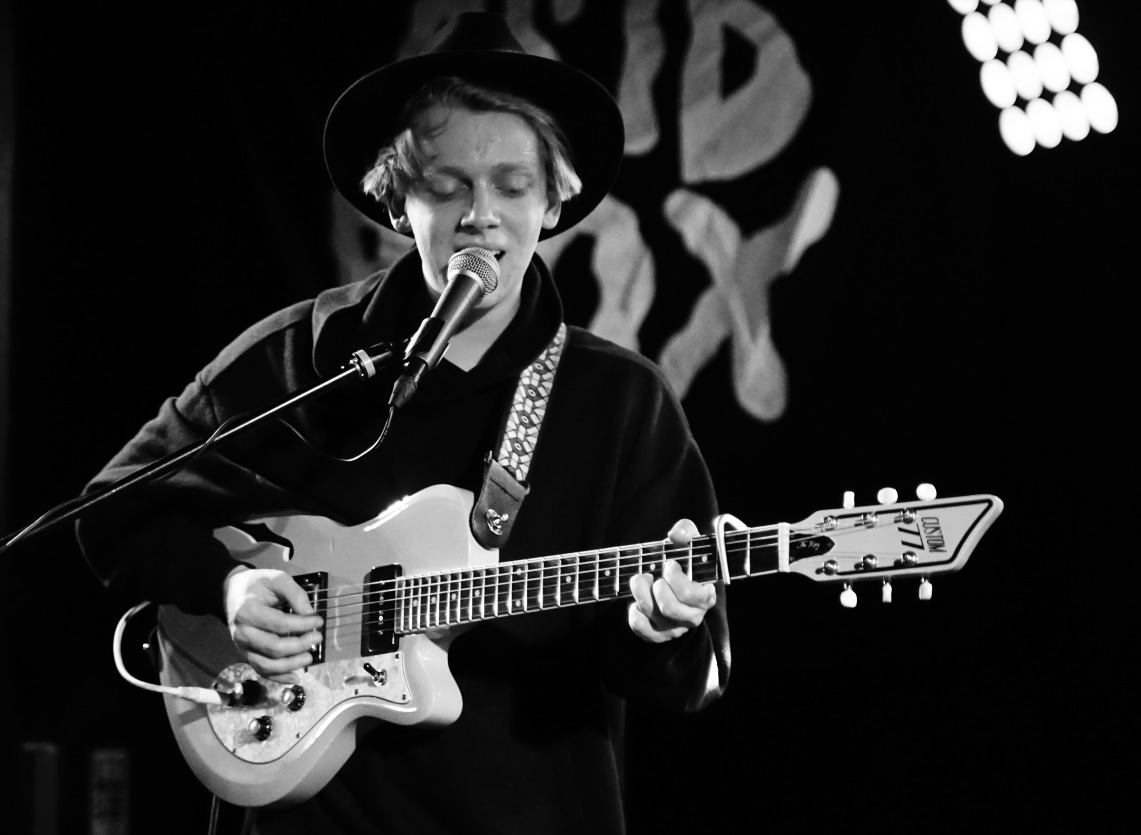 Acid Box welcomes us to enjoy a night of shoegaze provided by the Austrian duo MOLLY. This Wednesday, the 19th of February, The Hope & Ruin hosts a night of intimate acts from like likes of Austria’s MOLLY and Brighton’s Sleeping Creatures and China Bamboo. This event was featured on Residents gig of the week recommendations. 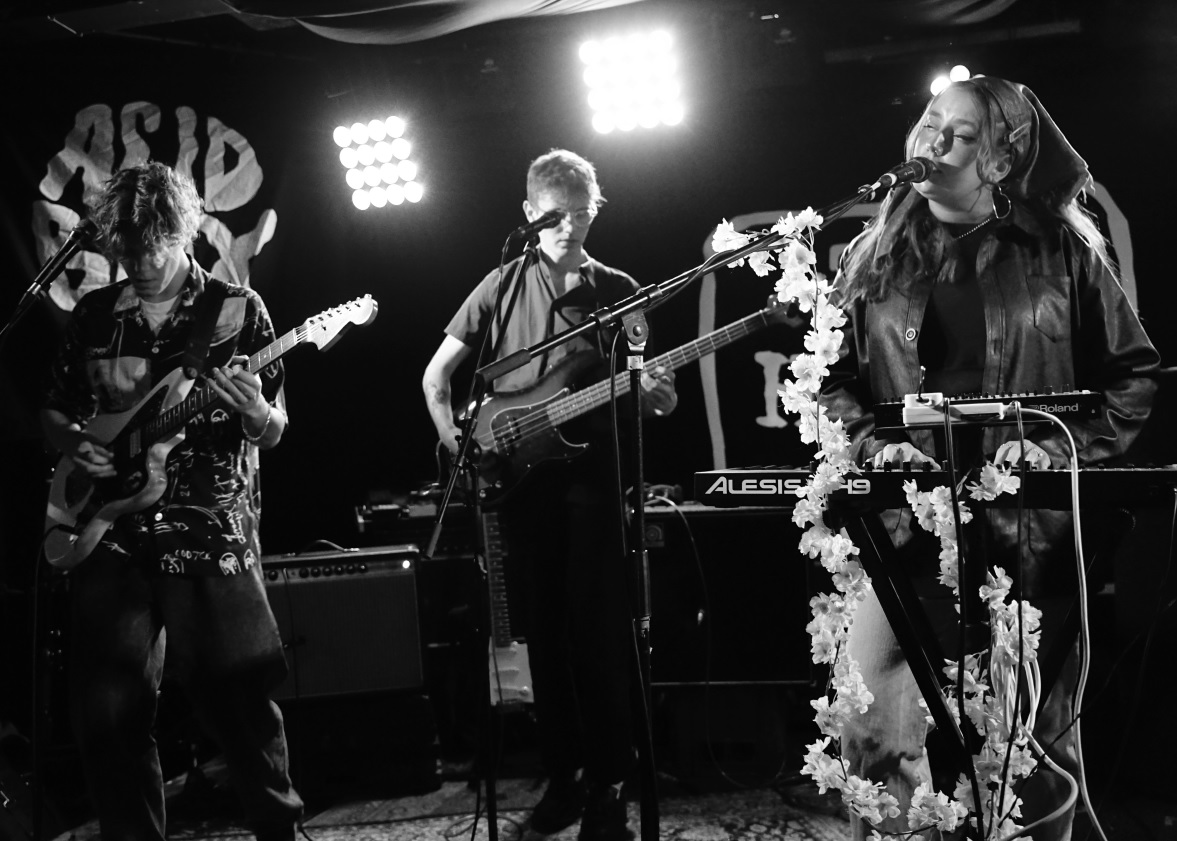 China Bamboo
China Bamboo is a 4 piece Bubblegum Goth band based in Brighton. Taking influence from The Cure and Alvvays, they blend intricate guitar parts and soaring pop vocal melodies to form a sound of their own. With the unique female vocals and a symphony of retro guitar sound that the band have, they draw listeners back to the 80’s.

First, to the stage at 8:35, they start off the night. The atmosphere is relaxed and the venue is fairly sparsely populated. It’s dreamy and works well with the mood. Consistently well-instrumented, the floaty guitar sounds and shimmering crash and ride cymbals bring out the best of vocalist Ruby’s voice. The modern synth sound combined with a slower pace creates a vibe that is complex yet accessible. It is full of emotion and vulnerability. It can be a little awkward at times due to how empty the space is but they play through it anyway as the music bubbles and drifts through space. They thank Acid Box for having them and shout out their latest single ‘We’ve Discontinued’ which is available on Spotify. They use a lot of reverb and echo which does create a really pleasant sound. 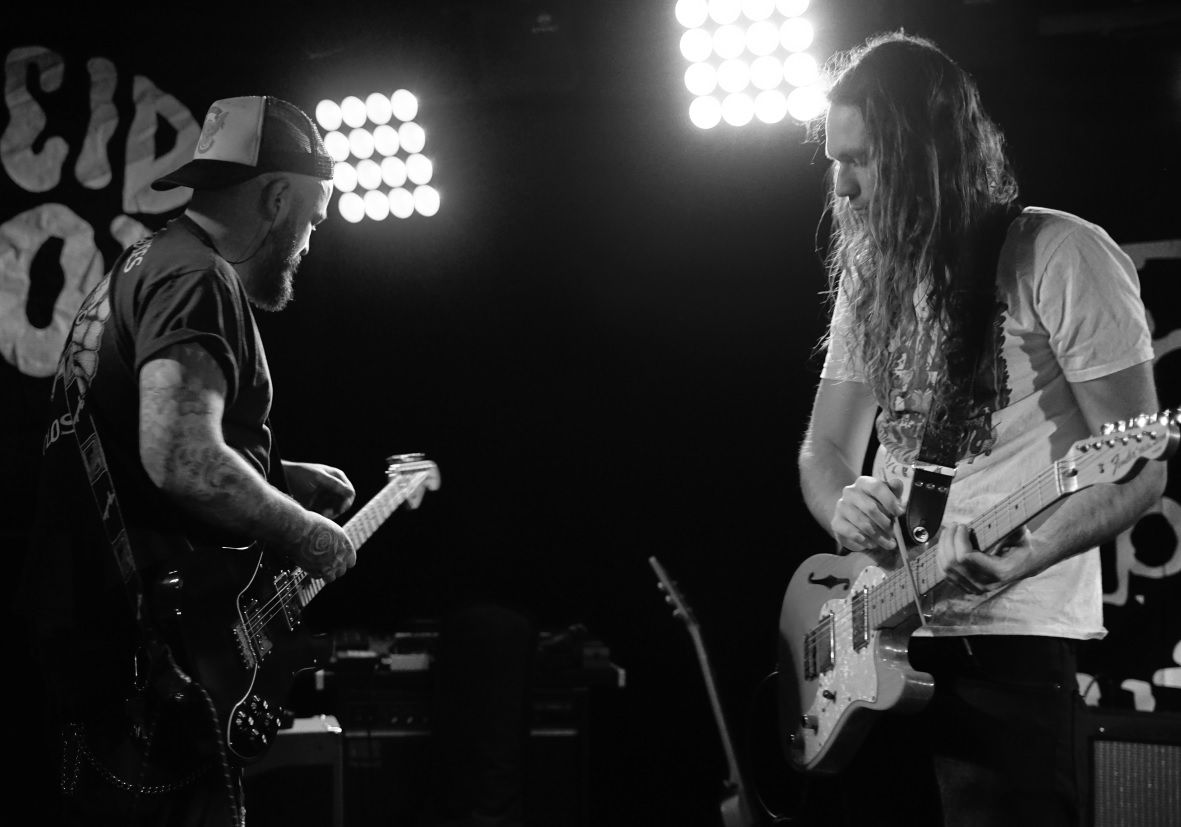 Sleeping Creatures
Brighton based improvisational atmospherics, Richard Allwood, Sean Michael Cox, and Jennie Howell produce some of the most interesting experimental ambient and shoegaze music I have heard in a long time.

The three-piece collective start at 9:20 and dives into drifting movements of improvised sound. It floats through modern sleepy dreamscapes which are wavey and rippling. The two guitars, a lot of pedals and soft drums produce a pleasantly moody cacophony of sound. It floats around the intimate space in turbulent waves of melody and harmony. The soft mallets used for the drums allow for longer hanging drum sounds which add a ting of oncoming doom with otherworldly haunting symphonies. This music is fairly complex and inaccessible to people who are not avid listeners of gaze, ambient and experimental music. One of the guitars is played with a chopstick which creates some more violin-esque sounds from the instrument. Its incomparable and high brow with slow simmering crescendos and vocal-less songs which almost never repeats. It bewitches the audience and when they do eventually finish because they did overrun slightly they are met with lots of applause from their thoroughly bewitched audience. 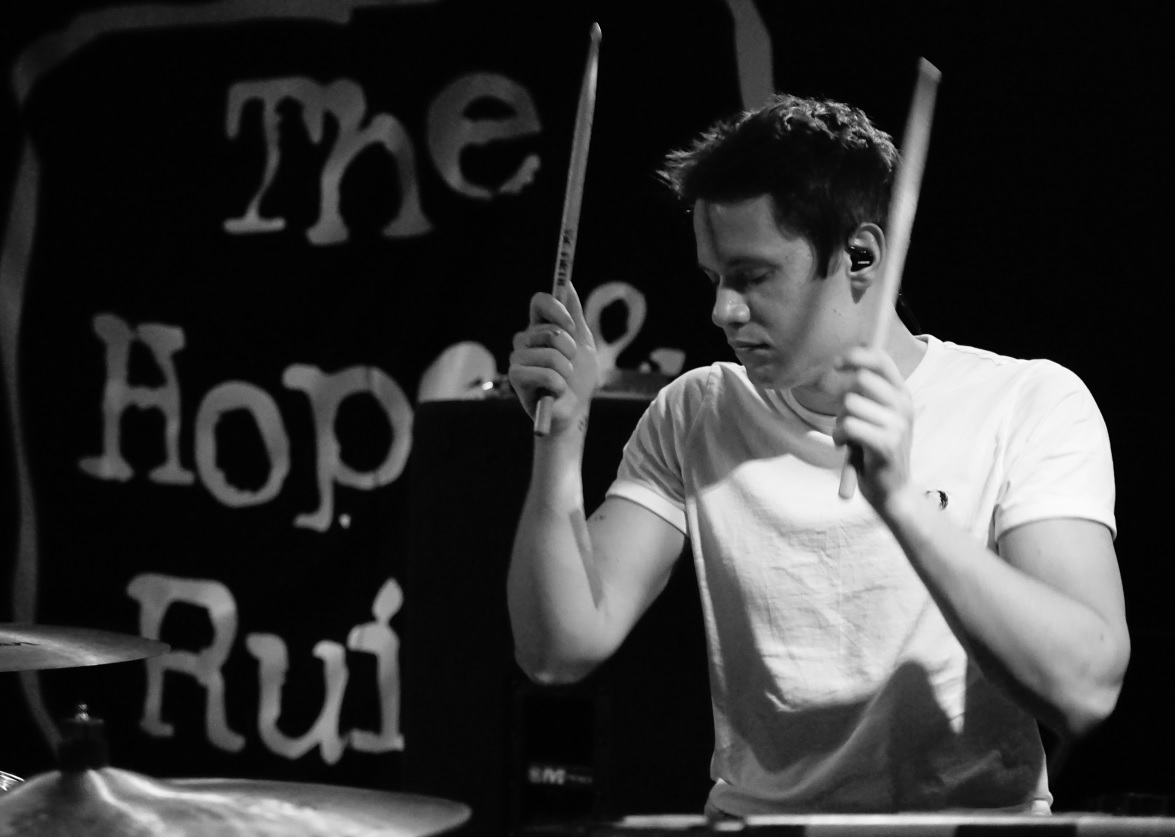 MOLLY
The headliners for Tonight MOLLY. The Austrian Shoegaze duo comprised of Innsbruck-based Lars Andersson and Phillip Dornauer. They produce their own distinctly alpine brand of shoegaze which has been described as mountainous, celestial and skeletal. They recently released their debut album ‘All That Ever Could Have Been’ In June 2019 and it is a wonderful flowing album that shows the accomplishments of the pair and rises through sonic peaks and swirling blizzards of sound. 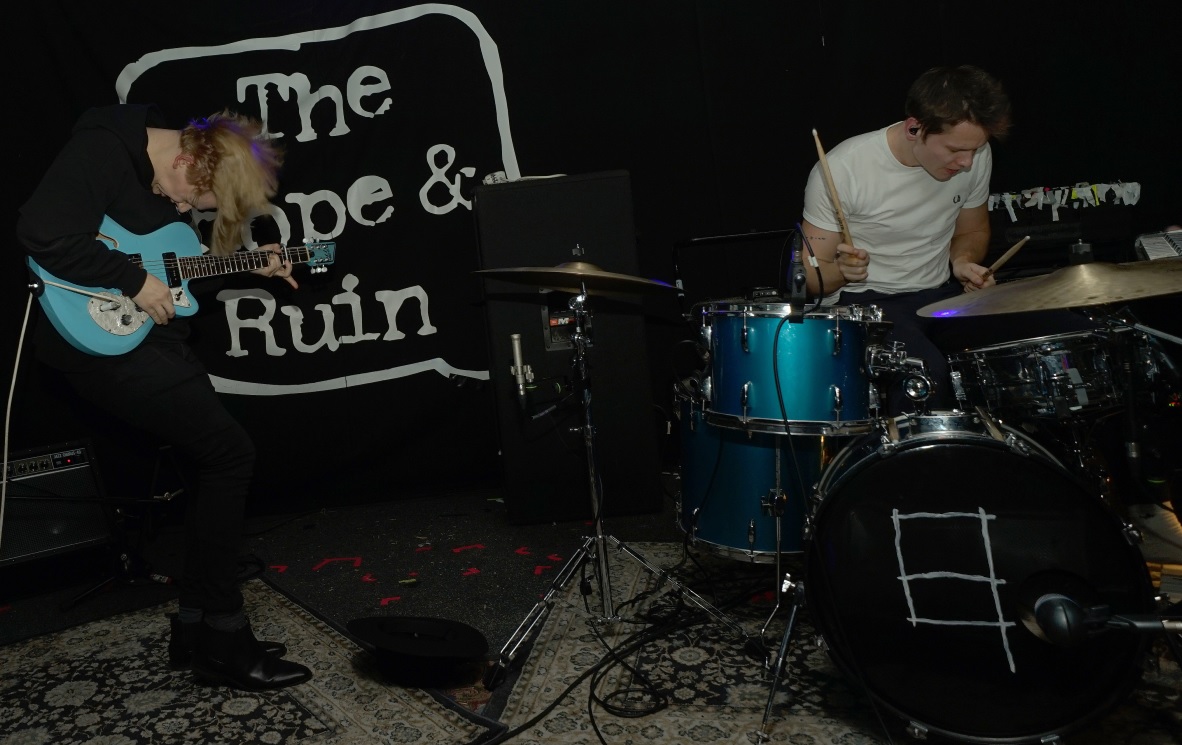 The pair come to the stage at 10:10. A little late but that was more due to the second act overrunning. The pair do some reorganising of the stage and clearing off some of the clutter before starting. The Hope and Ruin has had a few more people come and join to watch at this point. The set starts with some whooshing wind sounds and then begins to rise and rise as the guitar and drums come in. The sound is ethereal and delicate with long hanging vocals that creep in and remain for seeming minutes of long unbroken notes. It flows and simmers, dripping like melting ice slowly at first but then speeding up over time. Lars has so many pedals for his blue stylised guitar they are overflowing the pedalboard. Phillips drumming is perfectly volumed and in time to complement the building mountains of sound. The pair consistently build to unbelievable quivering tension before the flow gets released in a downfall of crashing overwhelming sound.

There is a deep-voiced intermission between a couple of the songs which snaps back into reality what we are watching. Lars asks for even more reverb which I can now feel shaking through the floor. The duo gets lots of applause from the crowd between each song. They are good at their craft creating an atmosphere which is really easy to just vibe out to. The crowd looks very deep in thought looking intensely transfixed on the sound makers. It is a deeply introspective and atmosphere with music made for the individual, not for company. It’s intimate yet totally desolate of connection between the onlookers. The set ends on the track ‘Glimpse’ which is hauntingly beautiful throughout and gets a large reaction from the crowd when it finally ends.

I will recommend giving these guys a listen if you are a fan of Shoegaze as this is a very refined approach to the genre and provides some parts of blinding artistry. Purchase and listen to ‘All That Ever Could Have Been’ HERE.

Check out Molly on their Bandcamp page HERE and visit their website HERE. 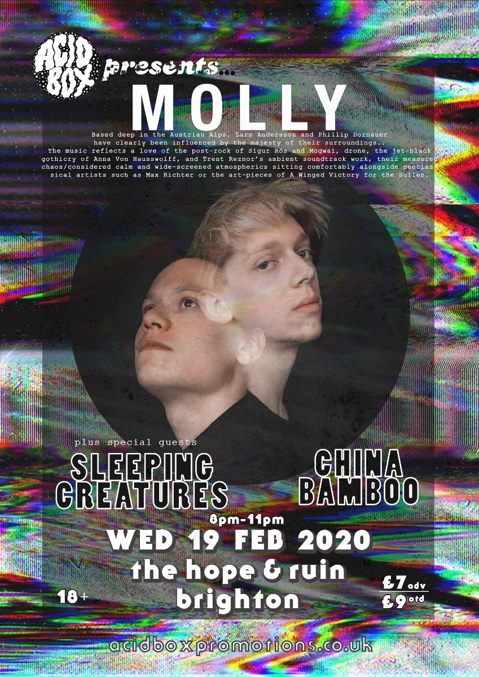