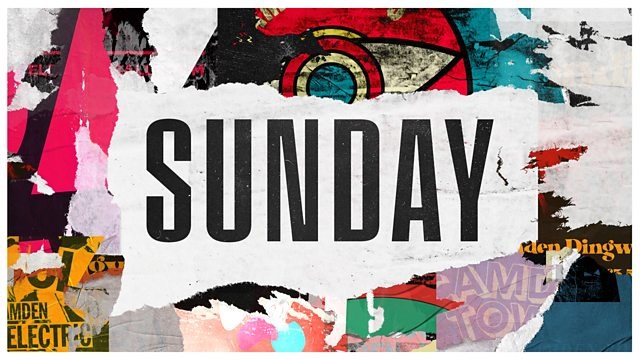 Today being International Women’s Day, the Roundhouse line-up is fittingly entirely female. Whether it’s because of this, or because the gig is being broadcast live on BBC6 Music, the evening has a real feeling of being an event. 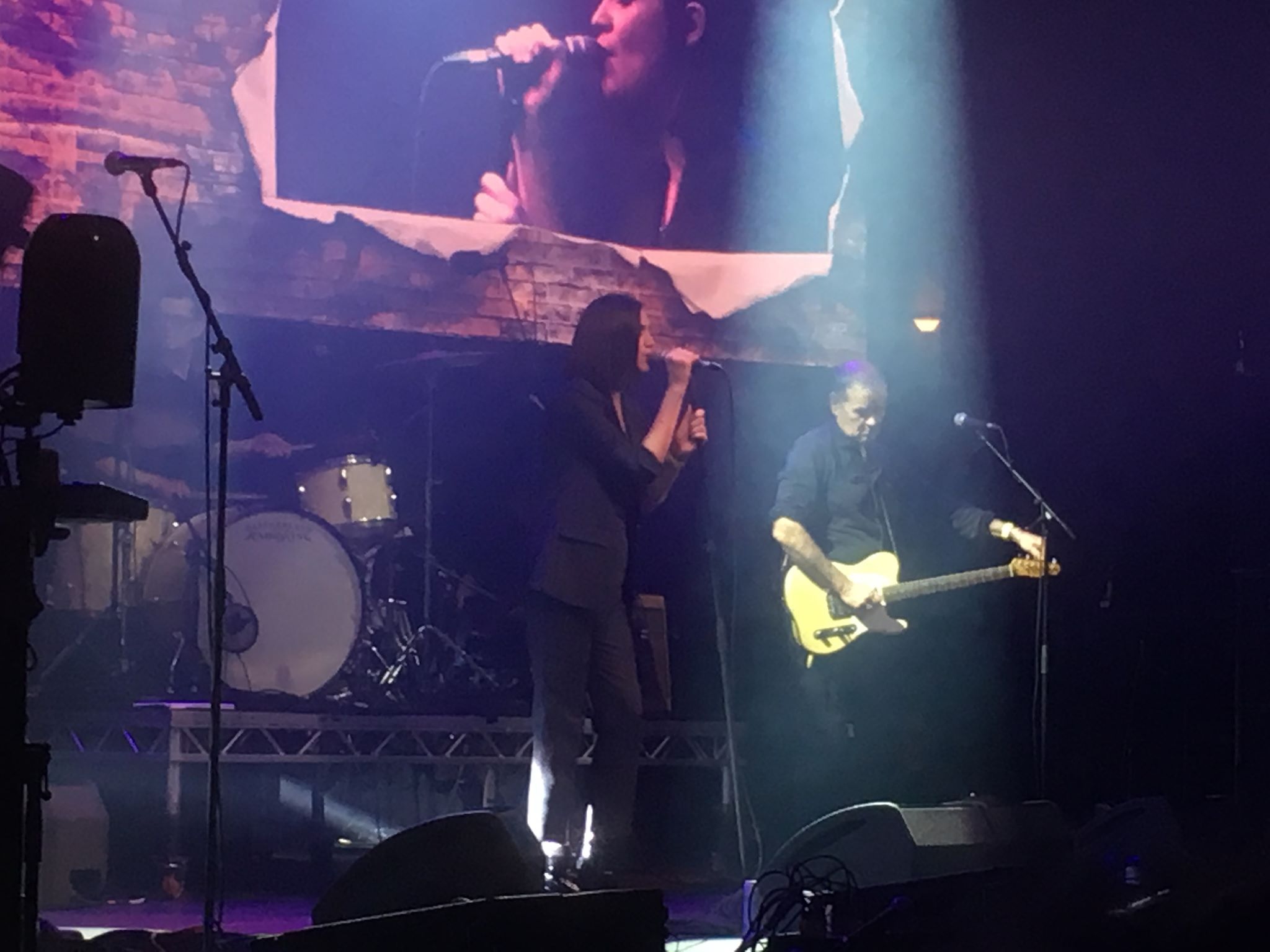 Proceedings commence with the truly wonderful Nadine Shah, who truly found her stride with her third album, ‘Holiday Destination’, in 2017. Her new album ‘Kitchen Sink’ is released in June. The title track of ‘Holiday Destination’ surfaces as early as the second track in her set. It’s one of the most pertinent songs of recent years, and deals with the discomfort (at the very least) that western holidaymakers feel when they are unexpectedly confronted with real poverty when on holiday. Nadine doesn’t dodge any issues which might make for uncomfortable listening. More than one of her songs deals with the experience of being a second generation Asian living in the UK for example.

Lest we forget, Nadine has a new album out in June, and she treats us to two songs from it: ‘Ladies For Babies (Goats For Love)’ and ‘Trad’. Apparently the title for the former comes from a phrase uttered by Nadine’s brother when he was younger. Maybe it’s best not to delve further….. Nadine covers the jazz standard ‘There Is No Greater Love’, which amongst others was recorded by Miles Davis and Billie Holiday, not to mention Amy Winehouse, who covered it on her album ‘Frank’. Nadine knew Amy and they used to sing the song together – a piece of Camden history right there. 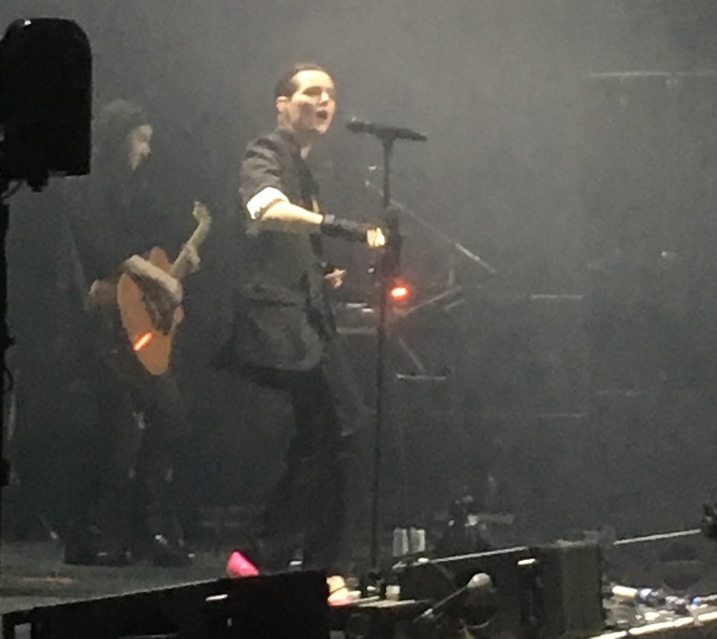 All of tonight’s sets are necessarily short, so Nadine is really just warming up when it’s time for her to finish. She’s followed by Jehnny Beth, erstwhile singer with Savages and numerous side projects. Jehnny has her debut solo album ‘To Love Is To Live’ released in May, and we get some tasters from that tonight.

From the very industrial opening to Jehnny’s set, it becomes apparent that this is going to be very different to a Savages gig. She still remains a very challenging frontperson however. At one point she dives into the crowd and sings from amongst them. Only the red light from her mic gives any indication of where precisely she is.

The mic with the red light drops the pitch of her voice by an octave, and gives it a robotic male sound. On ‘We Will Sin Together’ she uses both of her mics to produce and artificial octave apart harmony. One song, ‘I’m The Man’, sounds like it could be a Savages song. This is followed by a spoken recital of the lyrics from the Bacharach/David song ‘Wives And Lovers’. This outrageously sexist song (by today’s standards anyway) won a Grammy in 1963. How times have changed! This is another short set. It is however totally incendiary. An utterly breathtaking performance. I can’t wait to hear the album!

Jehnny Beth setlist:
‘Heroine’
‘Flower’
‘Innocence’
‘We Will Sin Together’
‘A Place Above’ (with Cillian Murphy) (Spoken Word)
‘I’m The Man’ (Followed by spoken recital of the lyrics from ‘Wives And Lovers’ (Bacharach/David))
‘How Could You?’
‘Human’ 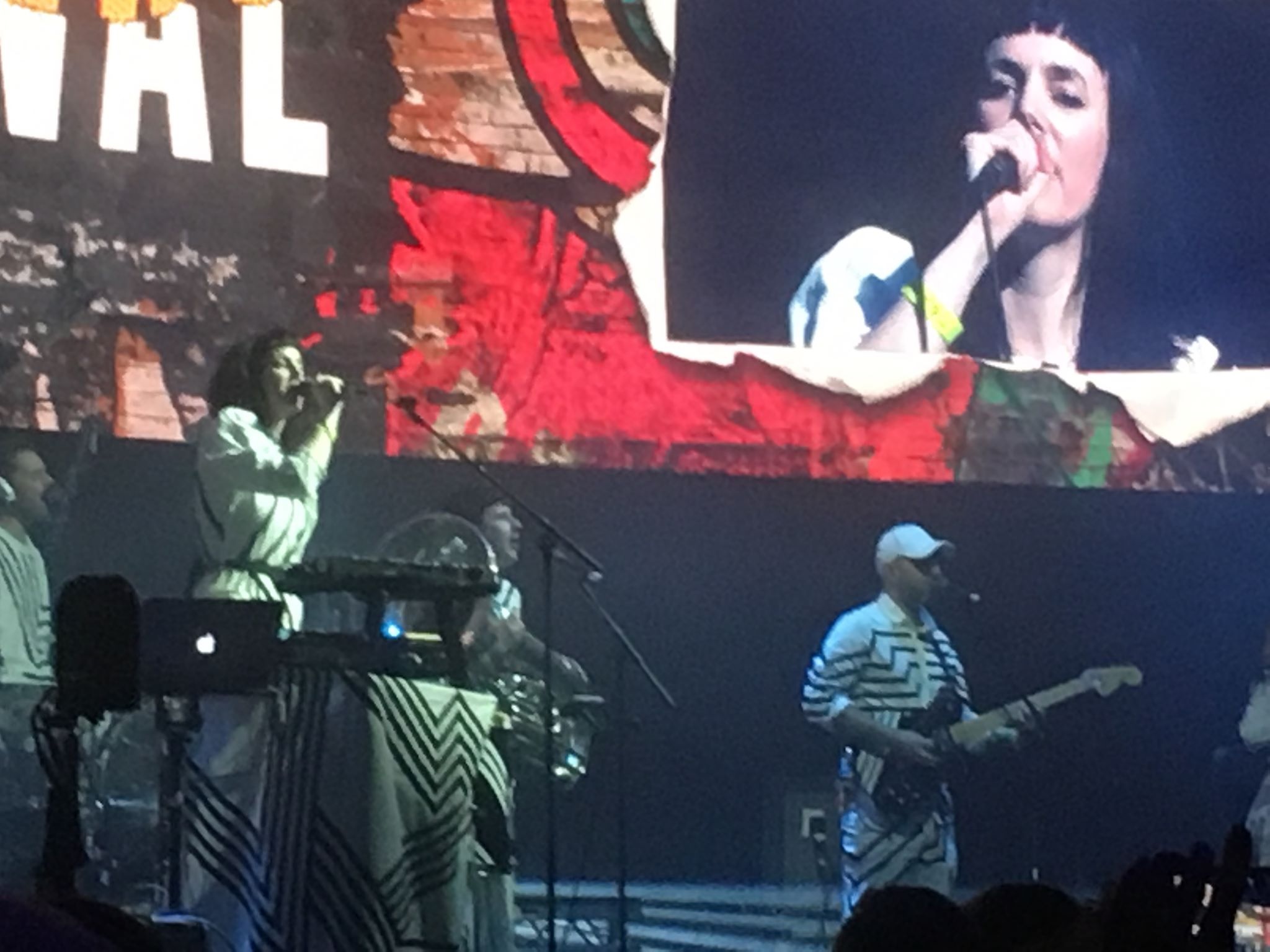 Anna Meredith is tasked with following this. Luckily her bravely imaginative music is more than up to the challenge. Anyone who has seen Anna or has read my recent review of her concert at The Old Market in Hove last month, (read it HERE) will know that her music is progressive in the true sense of the word, and that she is an engaging and exciting performer with a band who give life to her songs.

Tonight they are all dressed in matching outfits for their eight tune set. Well, you have to make an effort….. The musicianship on display is stunning. The guitarist taps, while his guitar is put through a pedal that makes it sound like a synthesiser. I’d never noticed before, but closing song ‘Paramour’ has something of the air of Led Zeppelin’s ‘Kashmir’ about it.  Another stunning performance. 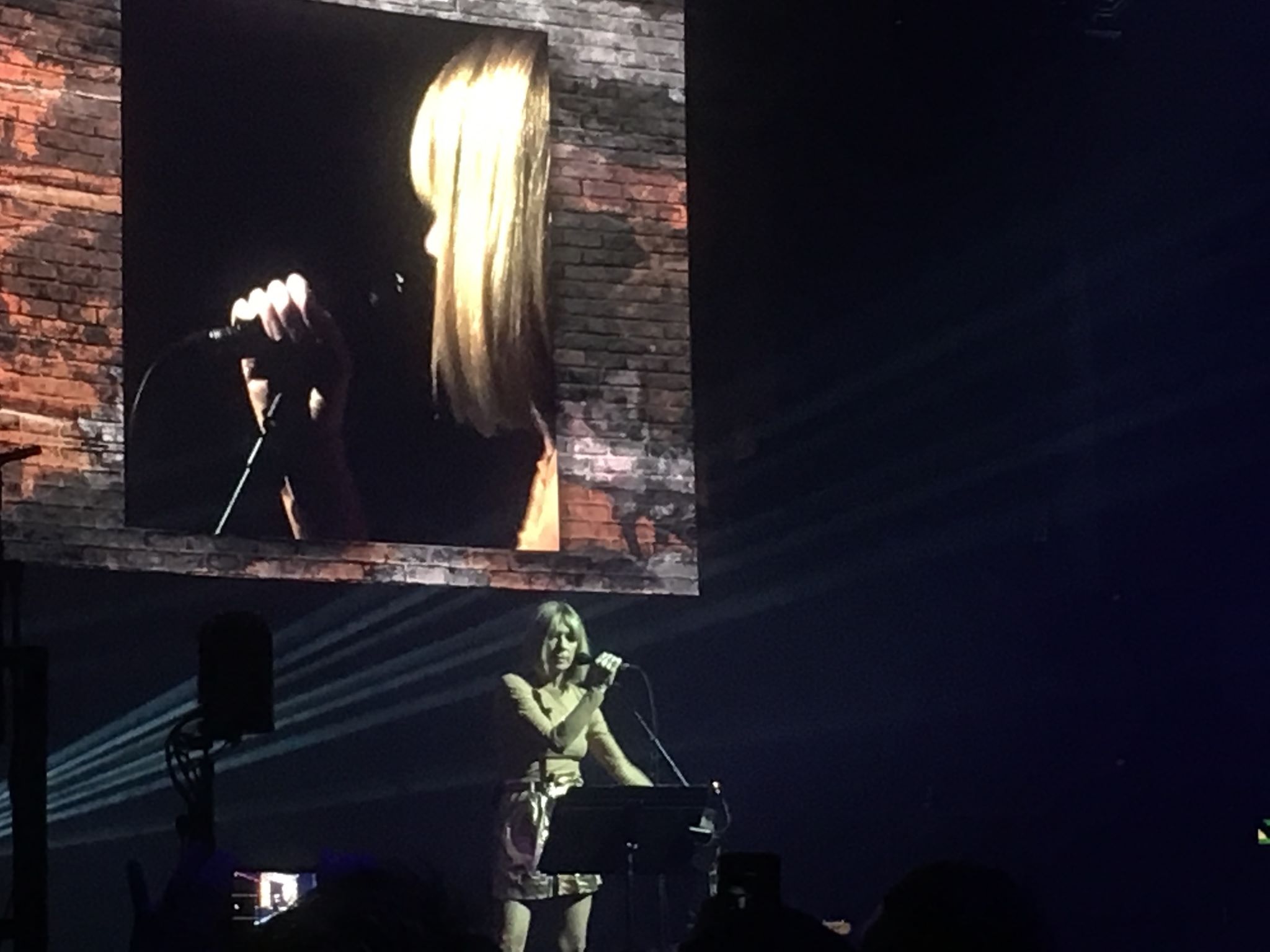 Next up we have Kim Gordon, formerly of Sonic Youth, and boy is she angry! Given the circumstances of her life over the past few years it’s hardly surprising. She looks cool, and very much as if it would be inadvisable to mess with her. She is backed by a three piece band and the music is rocky and accessible, although the first song is bordering on art rock.

Having a song called ‘Air BnB’ is very much a sign of the times. One song is so riff-driven that it could almost be Black Sabbath. Kim straps on a guitar and produces feedback while her guitarist plays with a screwdriver, just like that Thurston fella. In some ways at times she is being Sonic Youth. This is not a bad thing as she is introducing the concept of the band to a generation who will not have seen them live, and will now almost certainly never have the opportunity to do so. 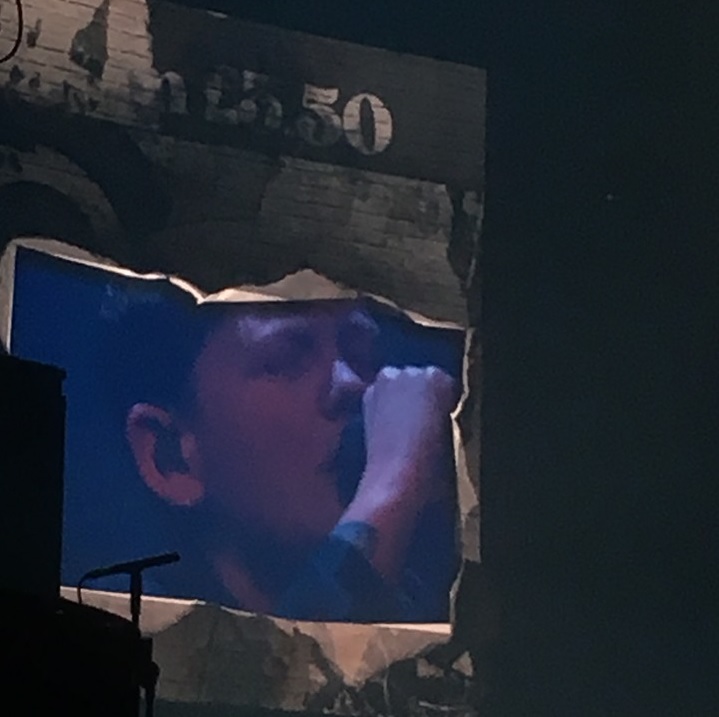 Kate Tempest on the big screen at the Roundhouse, London 08.03.20 (pic Mark Kelly)

The first thing that you need to know about headliner Kate Tempest is that she is lovely. An interesting fact about her is that she chose to debut her then new album at the Hangleton Community Centre back in May 2018 – read our review of that HERE.

This evening Kate talks about her journey to headlining here at the Roundhouse, and about our collective journeys here. Then she tells us that the message of tonight and the here and now is love and peace. I already want to introduce her to my family and friends.

The music is electro and samples are triggered and controlled by a keyboard player, but that barely matters. What does matter are the lyrics. As Dylan was to the early – mid 1960’s, so Kate Tempest is to the late teens and early twenties. Yep, she’s that important an artist.

I just hope that some of the things that she sings about are purely products of her fevered imagination. Very possibly the most important poet of her generation, so far……

For the next few days you will be able to click on the names below and watch the full performance of their Roundhouse concert: