Do you remember this Brighton record label? 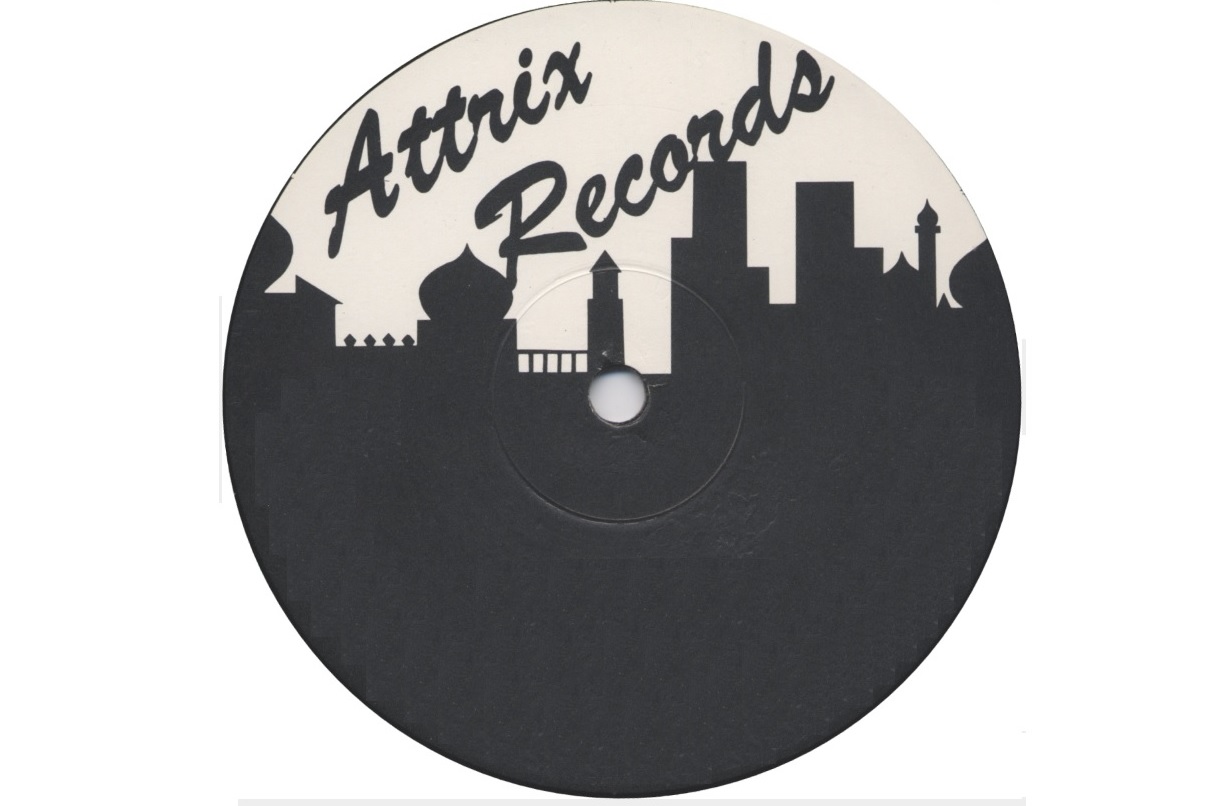 Many Brighton & Hove residents will be aware of one or two Brighton based and Brighton associated record labels from down the years. Arguably ‘Skint’ would more than likely be at the top of most people’s list, with them having been the main sponsor for Brighton & Hove Albion’s kit for an impressive nine years up until 2008 – which incidentally was one of the longest football league sponsorship deals. Other people may be able to quote ‘Bella Union’ records, due to the fact of their interesting selection of releases including John Grant material, and the fact that they are run by former Cocteau Twin, Simon Raymonde.

However, back in those heady post-punk days of the late 1970’s and early 1980’s, there was only ONE real label that was cataloguing the ‘sound of Brighton’ back then and that was ‘Attrix Records’.

This was THE label for emerging Brighton talent. It ran from 1978 to 1981 and was the brainchild of Rick Blair, who was the singer, guitarist and songwriter in The Parrots and is unfortunately no longer with us. Back in those days, I was attending Brighton Technical College in Pelham Street and so knew of the Attrix Records shop which was based just one street away at 3 Sydney Street, Brighton. 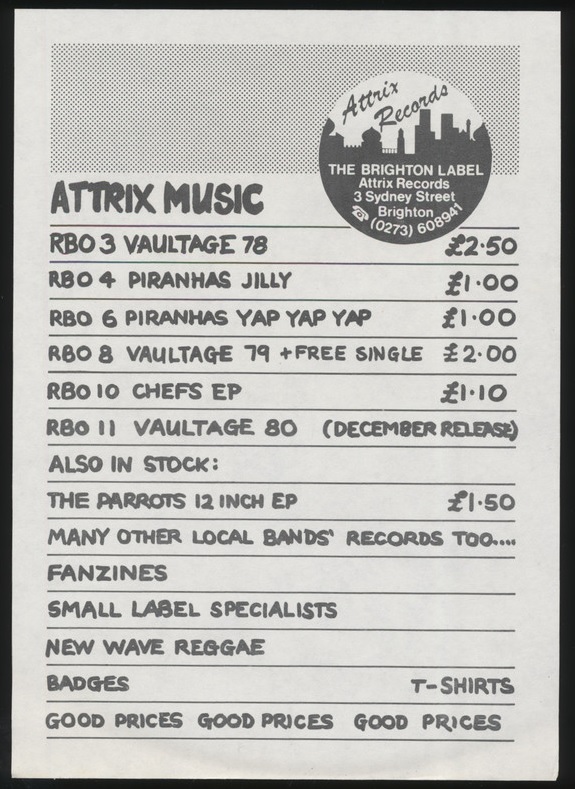 Attrix Records, the label, began with the release of a DIY single from a band called Attrix, this was titled ‘Hard Times’ b/w ‘Lost Lenoré’. The prefix for this debut release was ‘RB01’. The letters being the abbreviation of Rick Blair. Only 500 copies were pressed at a cost of £250, which was made up of savings and a loan from a friend. Attrix, were a three piece outfit which featured Rick Blair as guitarist and vocalist. He also wrote the two songs on the record.

Attrix Records are fondly remembered for their three Brighton time capsule albums – the ‘Vaultage’ albums: ‘Vaultage 78 – Two Sides Of Brighton’, ‘Vaultage 79 – Another Two Sides Of Brighton’ and ‘Vaultage 80 – A Vinyl Chapter’. The first of which featuring the debut venture onto vinyl for local darlings The Piranhas of ‘Tom Hark’ fame, as well as the ‘Peacehaven Wild Kids’, Peter And The Test Tube Babies.

Many of the Attrix tunes would have been given a spin by the legendary John Peel on his weekly late night slot on Radio 1. Popular Attrix artists, The Chefs, even recorded a John Peel Session in May 1981, as did The Dodgems (September 1979) and Peter And The Test Tube Babies (October 1980) before them. Peelie clearly couldn’t get enough of The Piranhas, as they recorded no less than three sessions for him, February 1979, September 1979 and January 1980. 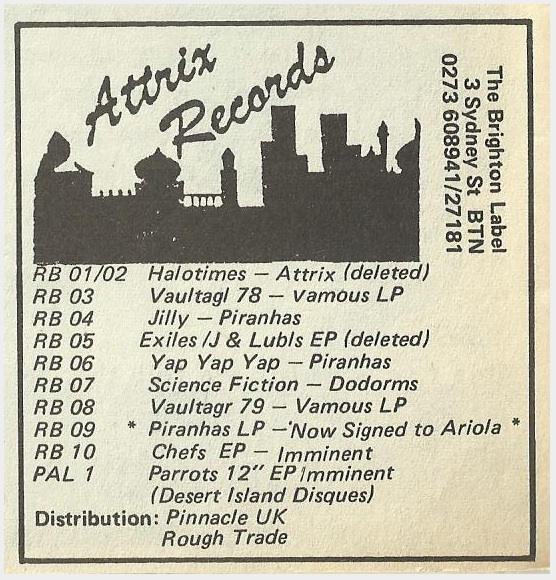 I can thank my lucky stars that I did manage to see some of the Attrix Records artists back at the time. I have fond memories of enjoying The Chefs live at the original Concorde venue, which was located right by Brighton Dolphinarium (now the Sea Life centre), and also seeing The Golinski Brothers in May 1980 supporting Martha & The Muffins at the Top Rank Suite (now PRYZM nightclub) , where naughty vocalist Darris, deliberately thanked “Martha & The M*ff Divers” for having them as main support. I saw The Ammonites supporting Black Slate at Jenkinsons (later known as Coasters and now Costa Coffee) later the same years, and as for Peter And The Test Tube Babies, well it seemed as though they were on every punk bill at the time. Possibly the choice night being them with Theatre Of Hate at the Top Rank Suite.
Rick surely couldn’t have known the legacy that he was leaving with us at the time, but Attrix Records is part and parcel of Brighton’s past. It is woven into the music fabric of our City and that ‘Brighton post-punk’ scene has been immortalised for future generations. Therefore, we have compiled a list of the Attrix Record releases, as a salute to a snapshot of late 70’s and early 80’s Brighton. 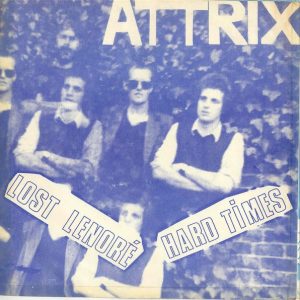 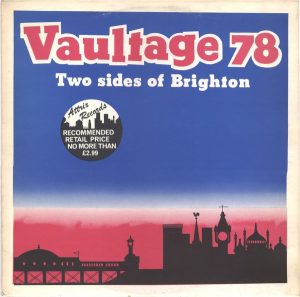 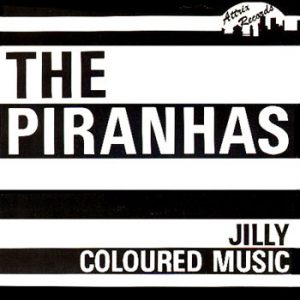 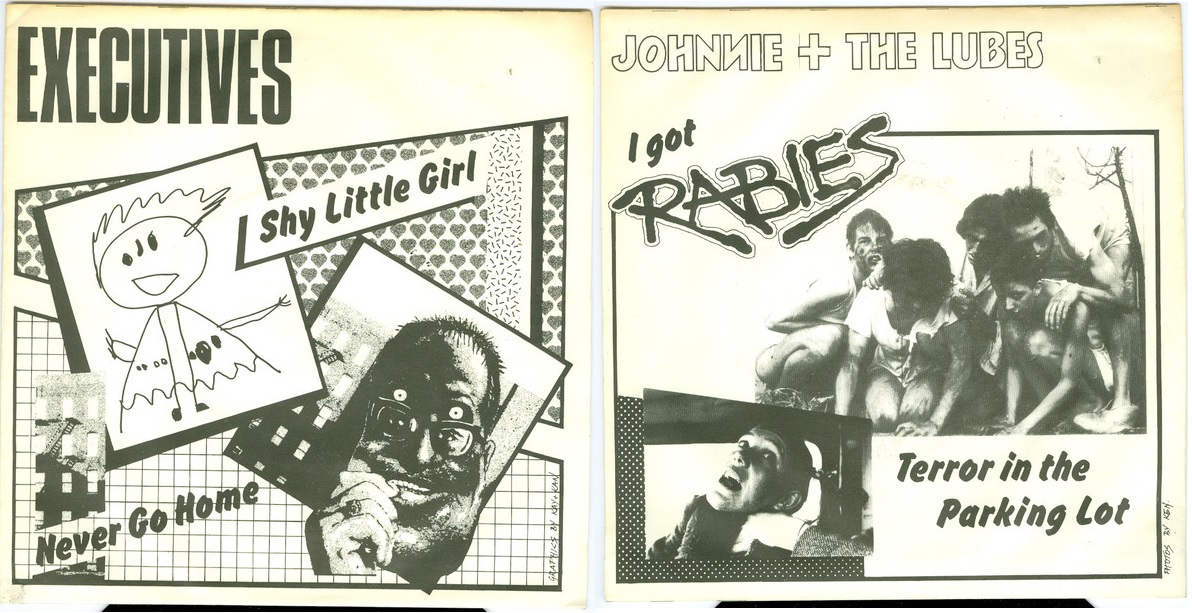 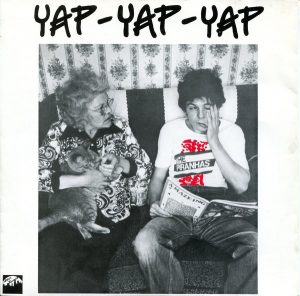 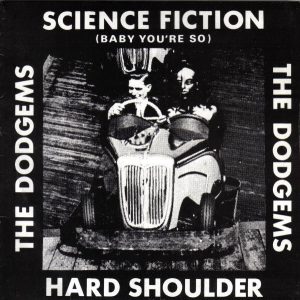 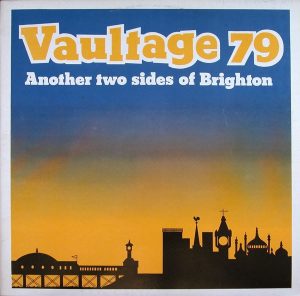 Various Artists ‘Vaultage 79 – Another Two Sides Of Brighton’ (compilation album) (Attrix RB/08/LP)
Side 1:
The Vandells ‘Bank Holiday’
The Vandells ‘Another Girl’
The Chefs ‘You Get Everywhere’
The Chefs ‘Food’
The Golinski Brothers ‘Bloody’
The Golinski Brothers ‘Too Scared’
Side 2:
The Lillettes ‘Hey Operator’
The Lillettes ‘Nervous Wreck’
Ijax All Stars ‘Sounchek’
Ijax All Stars ‘Reggaed Rumble’
Woody And The Splinters ‘I Want You To Be My Girl’
Woody And The Splinters ‘I Must Be Mad’ 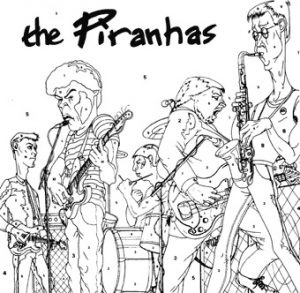 (Attrix RB 09) was allotted for The Piranhas debut album, but they signed to Ariola before it was released and the album was re-recorded and came out on Sire Records. The original Attrix recordings eventually saw the light of day via Anagram Records CD – The Piranhas ‘The Attrix Collection’. 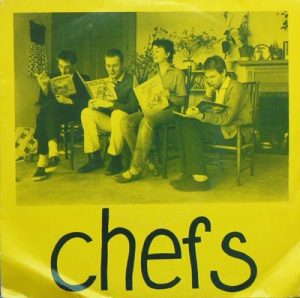 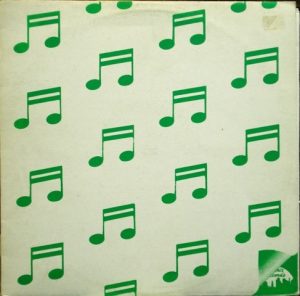 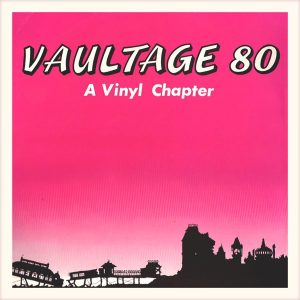 Various Artists ‘Vaultage 80 – A Vinyl Chapter’ (compilation album) (Attrix RB/11 LP)
Side 1:
Birds With Ears ‘Head In My Bag’
The Objeks ‘Negative Conversation’
Emma Sharpe ‘Motorway’
The Reward System ‘Extradition’
The Hollow Men ‘Never Again’
Idrenes ‘Red Gold And Green’
Dick Damage And The Dilemma ‘Do The Winklepicker’
Side 2:
The Red Squares ‘The Russians Are Coming’
The Mockingbirds ‘Money’
The Exclusives ‘Sinking Gondola’
April And The Fools ‘You Do’
The Ammonites ‘Blue Lagoon’
Bright Girls ‘Hidden From History’
Life Size Models ‘Have You Seen My Friend’ 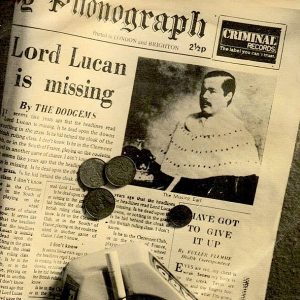 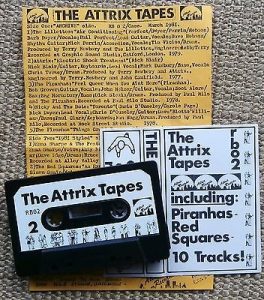 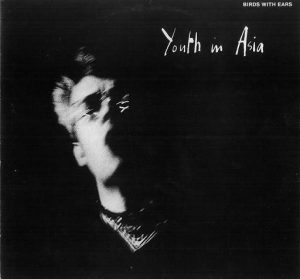 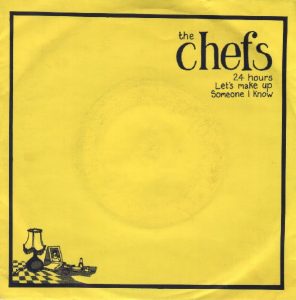 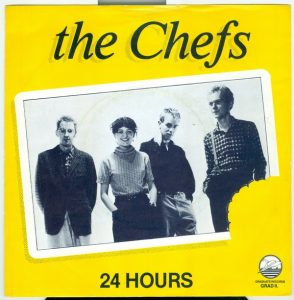 Del Greening from Peter And The Test Tube Babies recounts “We sat in Peter’s Dad’s garage in 1978 and wrote songs. ‘The Queen Gives Good Bl*wjobs’ became a song and ‘Elvis is Dead’  plus a couple of other tasteless classics. We managed to blag a few supports and in 1978 we did our first few gigs. We only had four songs so we did each song twice. Luckily at our second ever gig there was a guy called Rick Blair in the audience from Attrix Records. He was putting a compilation album together with local Brighton new wave bands at the time. I think he just thought we were so hilariously bad that he offered us a track on the album. So even though we’d only done two gigs, we’d already got the release of ‘Elvis is Dead’ sorted”.

Helen McCookerybook from The Chefs recounts: “Attrix had a shop in Sydney Street, Brighton, where you could go to hang out for as long as you wanted to and listen to music by bands like The Monochrome Set over their really ace sound system.

We were really pleased when the Attrix label asked The Chefs to contribute some tracks to the second of their Vaultage compilations, ‘Vaultage 79’. I had never imagined recording anything in my life. We went to Worthing (I think) and recorded two tracks at a DJ’s house. All I remember is that he had really thick carpets on his floors, his house was warm, and he had a mullet.

We were in a world of our own and none of us had any sort of formal musical training, but somehow the tracks turned out quite well. We always did know how we wanted our songs to sound, because we were all such music fans

Stuart Jones, who worked in the Attrix shop, became our manager, and we recorded an E.P. for the label followed by a single, 24 Hours, that John Peel really loved.

I remember designing t-shirts with the chef design on them, and insisting that if they were yellow tourists would buy them. Sure enough, hung in the doorway of the shop and fluttering in the breeze all of them quickly sold. I’ve still got one, after all these years. That’s called marketing, these days.

Rick and Julie Blair, who were behind the shop and the label, put a phenomenal amount of energy into recording Brighton bands. I don’t think they ever have been thanked enough for what they did. Rick passed away many years ago- but I can thank Julie now publicly for being such a significant catalyst for all those bands who recorded on the Attrix label. Thanks, Julie!”

John Helmer from The Piranhas recounts “I can’t remember exactly when I first met Rick Blair, but it was almost certainly at the Resource Centre in North Road (now the Brighthelm Centre) where we rehearsed below ground in the incredibly squalid Vault, which also doubled as a venue. We played gigs with his band. He was a mild and unassuming man, and a few years older than us, so of course we suspected him of being a hippy.

We were impressed, however when he set up his record label and included us on the ‘Vaultage 78’ compilation. Our saxophone player designed the artwork; I helped to screenprint the covers: it was all very hand-made and DIY in those days.

When John Peel picked up on the record it got a bit more big-time. There was the Attrix shop, with staff and everything. But Rick never stopped being just one of the nicest people you’d ever want to meet. When we went on to chart success it was with other labels, but you never forget your first label – or the thrill of holding your first vinyl release in your hands (not something musos always get to do today). Rick did that for us, and for a host of other local bands, for which he’s remembered with a lot of affection”.

Darris Golinski from The Golinski Brothers recounts “I moved to Brighton in 1978 and someone fairly quickly introduced me to ‘Vaultage 78’. I loved it! Especially loved Piranhas, Peter and the Test Tube Babies and the Dodgems. I loved the idea of taking angry punk and kind of subverting it with self-parodying vaguely end-of-pier music hall.

And so when a short while later Bob Golinski invited me to form a band with him several of the earliest songs I wrote – ‘Bloody’ and ‘Tried It (Didn’t Like It)’ come to mind – were outright attempts to write songs in this style that I had quickly fallen in love with.

Soon I got to meet and make pals with all the musicians I so admired on ‘Vaultage 78’ through seeing them gig, gigging with them and just hanging out at places like Attrix Records, the Resource Centre and Mrs Beaton’s café.

As others have said here and elsewhere Rick Blair was such a lovely man you could not fail to like him. But he wasn’t just lovely – he also had balls. Opening up your own record shop and pressing your own records took some self belief.

And so when Rick asked us if we would like to record a couple of tracks for the upcoming ‘Vaultage 79’ I was made up.

And when, later that year he suggested that we might back the Clash when they came to town. From that point he became my undying hero. 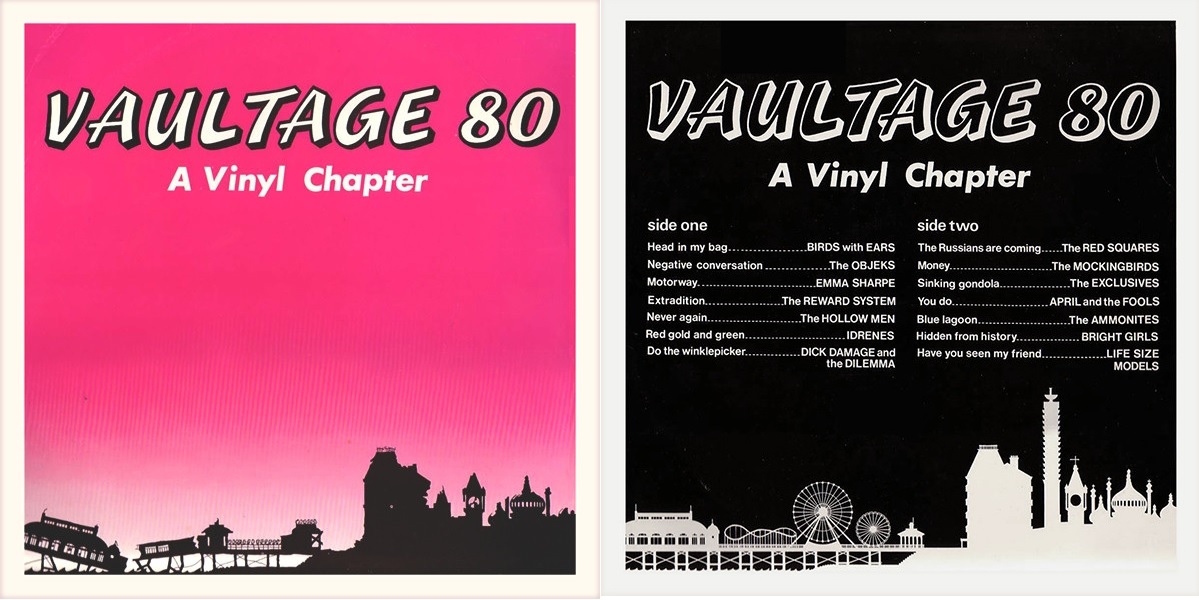