Nurses and GMB, the union for NHS workers, are supporting a second national day of protest marches and rallies across the country including in Brighton and Hove.

The union, which has been campaigning for “fair pay” for all NHS workers, is supporting members as they try to convince the government that they deserve a 15 per cent pay rise.

They said that protests tomorrow (Saturday 12 September) would be peaceful and socially distanced at Hove Lawns, opposite Grand Avenue, at 11am – as well as at the BBC in London and in Bournemouth.

The organiser Kelly Robbins, who is also a nurse, said: “We were feeling overworked and exhausted as many of us were forced to work longer hours, tougher hours, staying away from our families for weeks at a time, fighting an ever-evolving situation with inadequate PPE, but fought on we did.

“While seeing one of the highest healthcare worker death rates in the world from covid-19, we accepted the risk, determined to do what’s best for our patients and the country.

“Ministers have been happy to ‘clap for the NHS’ but have failed to deliver real signs of appreciation for NHS workers – excluding many from a well-deserved pay rise and resulting in yet another real-terms cut.

“The government has easily forgotten and abandoned the very same people that have saved their lives.”

Ms Robbins and other GMB NHS members are angry that they were left out of the recent public sector pay deal and said that they were at least 20 per cent worse off in real terms than they were 10 years ago.

There are currently around 100,000 vacancies in the NHS, blamed on under-resourcing and funding cuts, and morale is reported to be low among NHS nurses and other staff.

According to the GMB, the government offers platitudes and clapping instead of decent pay or better terms and conditions. The NHS workforce had proven itself to be consistently reliable and caring, it said, even before the heroism of fighting the coronavirus crisis, with a second wave looking increasingly imminent.

GMB regional organiser Gary Palmer said: “GMB were clear that the 15 per cent only begins to address the last decade of pay freezes and enforced pay caps, ending in the recent disastrous three-year deal which ends in April. It saw long-serving NHS staff pay increases below the cost of living.

“Frankly, our members have told us enough is enough and that, although the support was welcomed, the ‘praise, clapping, and kind words’ aren’t exchangeable in the shops for food or bills and rent or mortgage payments.

“Risking your life and that of your family members to care for all those unfortunate enough to get sick throughout this pandemic wasn’t enough for this government. 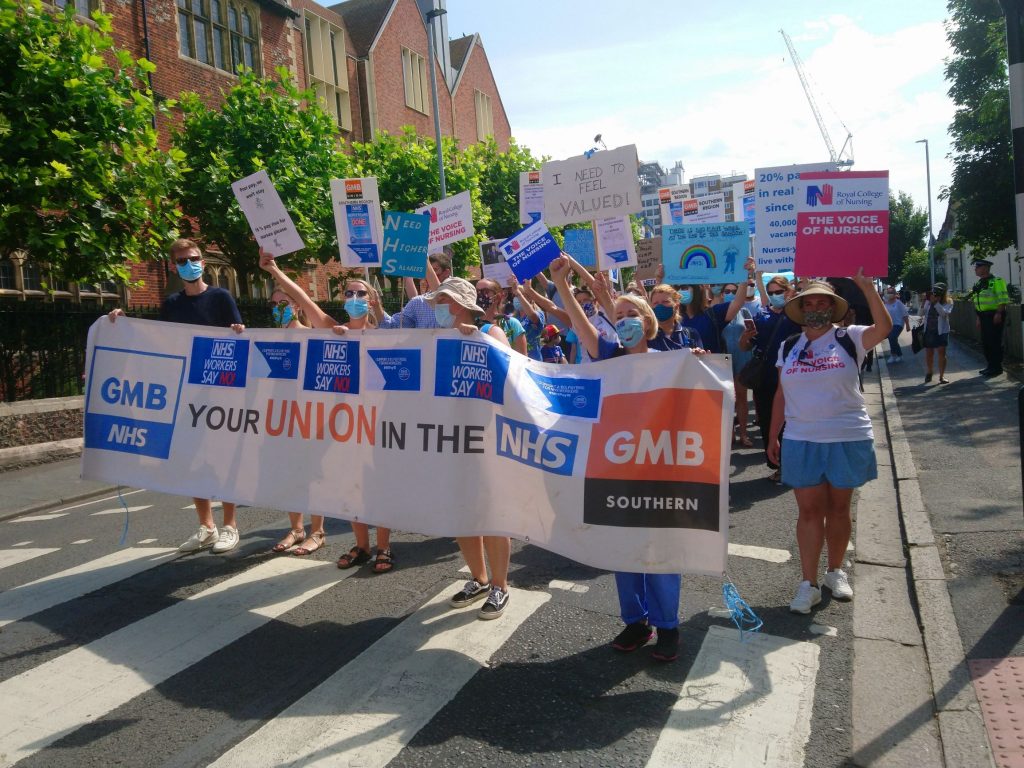 “They don’t appear to be considering bringing any pay rise forward as a thank you, before even taking into account just how much NHS staff have lost in real terms over the last 10 years.

“This is clearly now a straight battle between a worthless government and a priceless workforce, with the GMB backing the NHS workers all the way.

“They remain there for you. How about being there for them? Join GMB and NHS workers on Saturday 12 September at an NHS rally near you.”

Roz Scott is a freelance journalist and SEO copywriter based in Hove. You can subscribe to her blog here.