Weeds are being allowed to take over the pavements of Brighton and Hove, making them unsafe, according to a Brighton councillor. 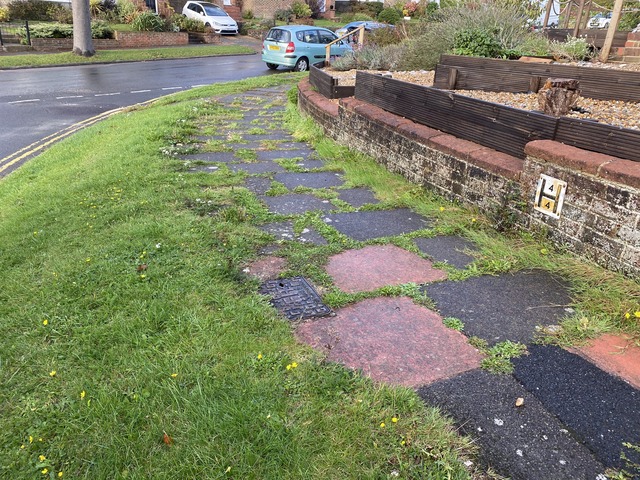 Weeds have created uneven and dangerous pavements in places such as Greenfield Close and Wilmington Way, in Brighton, according to Councillor Alistair

Conservative councillor Alistair McNair said that he was concerned that surfaces were being damaged, causing a trip hazard.

The Patcham councillor said that people were pleased with the weedkiller ban but said that other steps were needed to keep people safe, especially those most at risk from uneven surfaces.

It is the second year that Brighton and Hove City Council has not sprayed pavements with glyphosate herbicide during the summer.

Instead, the council said that it had employed more people to remove weeds in priority areas.

Glyphosate, also known by the brand name Roundup, has been sprayed in parks and on playing fields as well as on roads, pavements and housing land in the past. The council aims to phase it out completely by 2022.

Wild flowers and weeds have flourished on pavements, kerbs and roads and in gutters since the council started to limit the use of glyphosate. Other wildlife such as bees are said to have flourished as a result.

Councillor McNair said: “People are happy there is no glyphosate but there is not a reliable replacement.

“I’ve heard about the use of hot foam and, currently, the workers are using hand tools. What we need is a regular time when it happens every year.”

Pavements, he said, should be cleared two or three times a year – or even just once! He added: “It’s not just unsightly. It breaks up the pavement and causes a trip hazard.

“There are many steps up and down the verges – and people need to use them – but it is easy to trip on the weeds and the grass.”

Councillor McNair said that Greenfield Crescent – where weeds were “taking over” – and Wilmington Way, in Hollingbury, were of particular concern as well as the Brangwyn estate in Patcham.

Brighton and Hove City Council said that the coronavirus and lockdown had affected the weeding schedule this year.

Some street cleaning staff who would normally carry out the work had been diverted to more urgent frontline roles in Cityclean and on the seafront to cover staff who had to self-isolate.

The council said: “Please be assured our street cleaning staff are now continuing to work hard to remove weeds and leaves from the most affected areas of the city.

“Removing weeds manually means less ground is covered than using a pesticide and inevitably there will be more weeds visible.

“There has been feedback from some residents who support this approach as it encourages more bees and other insects.

“We will continue to keep the work under review and look at where we can make improvements.”

Any resident who is concerned about a trip hazard or damaged pavement can report it to Cityclean on 01273 292929 or email cityclean@brighton-hove.gov.uk.

The council said that it was still using pesticides on invasive species such as Japanese knotweed and on tree stumps.