Two burglars have been jailed for two years each despite fleeing empty-handed after breaking into an electrical shop in Hove. 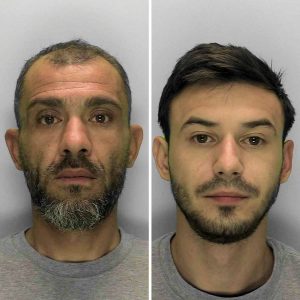 Sussex Police said: “Two men who broke into an electrical retailer – but got away with nothing – have been jailed for a total of four years.

“Police were alerted to a break in at Currys PC World, in Old Shoreham Road, Hove, at around 4am on (Sunday) 2 August.

“Officers arrived at the scene and discovered a large hole in the rear of the premises where the suspects had forced entry.

“Damage was caused to a number of stock rooms where they had attempted to gain access but they fled the scene empty-handed.

“Inquiries led to an Audi being stopped on the A23 north of Brighton. The two occupants were found to be wearing the same items of clothing as those seen at the break in and items recovered from the vehicle included a drill, several bags, gloves and a head torch.

“Aurelian Gheorghe, 41, of no fixed address, and Andrei Metea, 22, of Winchester Avenue, London, were arrested and charged with burglary with intent to steal.”

In May two men were jailed for their part in another burglary at the store after goods worth up to £80,000 were stolen in March.

Marian Ghita, 44, a binman, and car cleaner Cristian Rusu, 29, were part of a four-strong masked gang that broke into the branch.

They stole mobile phones, laptops and other electrical goods but the pair were caught heading home up the M23 and their haul was recovered.