Police offer reward in search for abusive thug on the run

A reward has been offered as police step up their search for an abusive thug who went on the run as he was due to face justice. 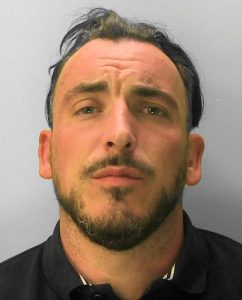 Andrew Anderson, 39, was given a four-year jail sentence in his absence after being convicted of threatening and harassing women – one of them from Brighton.

Today (Monday 26 October) Sussex Police said that a £500 reward was on offer as their manhunt continues.

The force said: “Police in Sussex have offered a £500 reward in the search for Andrew Anderson, already sentenced in his absence to four years’ imprisonment for a series of threats and offences against women.

“Anderson is also wanted for questioning in relation to further offences allegedly committed while evading custody.

“The search has extended to London as detectives believe he has recently been the in the N1, N7 and EC1 areas in the centre and north of the city.

“Anderson failed to appear for sentencing at Lewes Crown Court on Friday 31 January, having been found guilty at a trial held in his absence the previous month of seven offences relating to domestic abuse and harassment of two victims.

“The court also issued a restraining order prohibiting him from any contact with either of the women and another woman who gave evidence at the trial of his harassment of her.

“Anderson, who is 39, is white, 5ft 9in and of medium build, was last seen with dark unkempt hair and facial hair, once resided in the Bexhill area and still has links to the East Sussex area.

“During his trial the jury heard about his systematic and threatening intimidation of his victims, which included threats to their families, harassing one of the women with a series of phone calls threatening violence, threatening to pay someone to beat up the other woman and causing ‘keying’ damage all around her car.

“Police also want to interview him about further allegations of harassment and breach of his restraining order against one of the women who Anderson is prohibited from contacting.

“Detectives believe the reward of up to £500 for Anderson’s arrest, in order to serve the sentence he has already been given, will result in information coming in.

“Anyone who sees Anderson or knows of his whereabouts is asked to contact the police right away by calling 101 or 999, quoting Sussex reference 47200160279.

As Judge Mark van der Zwart passed sentence, the court was told that Anderson had a string of convictions for assault and harassment of women over the past decade.

The judge said: “Crimes such as these by controlling and possessive men cause damage to the personalities of their victims and cause changes to confidence which can take years to recover from, if recovery is possible.

“Women need to know they will have the backing of the courts if, as these two brave young women did, they have the bravery and strength to speak up.

“Men like Mr Anderson need to know that their behaviour won’t be tolerated and will be dealt with seriously.”