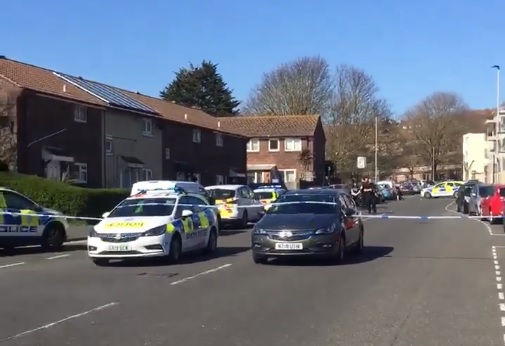 A police cordon in Whitehawk Road in April

A young father was seen fleeing in terror from two men who rained punches on him and then knifed him to death, a court heard this morning.

Muhammed Lamin Jassey, 26, was killed on Whitehawk Road on the afternoon of April 5 this year after a single stab wound to his chest.

Daryl Richardson, 26, and Bobby Smith, 22, are standing trial accused of his murder at Brighton Crown Court this month. They deny the charge.

This morning, prosecutor Philip Bennetts QC told the jury the attack was witnessed by three people, and caught on CCTV.

He also said police found the victim’s blood on clothing owned by both men, which had their DNA on.

He said that Richardson, of Southsea, admits being at the scene. Smith, of Coolham Drive, Whitehawk, denies being the second man caught on CCTV when Jassey was stabbed at all.

Mr Bennetts said: “It is the prosecution case that the defendants acting together killed Muhammed Jassey.”

He briefly described the accounts eyewitnesses are expected to give over the coming days: “Simon Miles was with his friend Paul Tucker walking on Whitehawk Road at about 2pm. He saw two people dressed in black clothing chasing the deceased.

“The deceased then stopped. He raised his arms up. He didn’t have anything in his hands. He appeared ‘shit scared.’

“The two in black clothing “huddled up on him.” There was an exchange of blows . . . The two then ran off. Mohammed Jassey collapsed.

“Paul Tucker recalls the taller of the two holding the deceased whilst the shorter patted the deceased down. ‘At first I thought it was just a scuffle and them robbing him however I now realise the shorter male was stabbing him while the taller male held him still from behind.’

“Andrew Seal was walking on the Whitehawk Road. He saw two hooded guys run out of Findon Road. One was shorter than the other. He heard a female’s voice shout ‘He’s over there.’

“They ran up to the deceased. They were seen to talk. The deceased was heard to say ‘No, No, No, I’m not doing that.’

“There was a physical scuffle between the three. The deceased was held by both his attackers.

“The thrusting movement was towards the left side just under his rib cage at the back. The taller guy ran off. The shorter guy then ran off. The deceased collapsed.”

Following the stabbing, the assailants were seen running off to Kite Close flats.

Police went there, and were approached by a resident who told them a friend had told her Richardson was responsible, and was hiding in one of the flats there.

Police went to that flat where they found Richardson and Smith who were both arrested for murder.

Mr Bennetts said the pair had gone to that flat as their friend Shana Cager lived there.

He said Shana’s cousin Lillian Hazelgrove was there when they arrived and saw Smith carrying a phone, which Richardson had spotted and attempted to smash.

The jury was told Richardson’s girlfriend Lauren Champion was with them, and told Lillian there had been a stabbing, and that “Daryl and Romeo [Smith] did it.”

When Shana and her mother Kerry returned to the flat, Lauren also told them the pair had stabbed someone.

Shana left, told a neighbour, who in turn informed the police.