The former Labour leader of Brighton and Hove City Council has apologised for referring to three colleagues as “dumb” councillors.

His remarks were reported by Brighton and Hove News in July as one Labour councillor was suspended and two resigned and the party handed over power to the Greens.

On Twitter today (Sunday 22 November) Councillor Yates said: “In July 2020, I made a public tweet and also gave a quote to a local media outlet regarding two separate issues which I feel strongly about.

“I used the word ‘dumb’ when referring to three unnamed BHCC councillors and the words ‘main sewerage’ and ‘detritus’ in relation to the process of removing the scourge of anti-semitism from the Labour Party.

“I accept that my use of those words caused offence and am sorry for the distress they caused.

“I particularly regret any impression given that my tweet and/or comment were offensive, discriminatory or disrespectful toward the unnamed councillors, and that I used language which appeared to refer to people in disrespectful or inappropriate terms.

“That was not my intention.

“I removed my tweet within one day, realising it was badly worded, and have since taken into account the complaints received about my conduct.

“While I stand by the principles I articulated and the sentiments I expressed, I fully acknowledge that I should have chosen different words to express my views.

“I have co-operated fully with the council’s ‘standards’ process and am committed to articulating my position in future in language which does not risk offending people in the above way.”

The Labour councillor who was suspended, Anne Pissaridou, is understood to have been one of those who complained about the “dumb” councillors remark. She remains suspended.

The two who resigned from the party were Councillor Nikkie Brennan and Councillor Kate Knight.

@paulinemable @GregHadfield @bhcitynews 1/5 In July 2020 I made a public tweet and also gave a quote to a local media outlet regarding two separate issues which I feel strongly about. I used the word ‘dumb’ when referring to three unnamed BHCC councillors

The row about anti-semitism and the fall-out locally attracted more comment on social media at the time.

Tweets included comments about the left and right wings of the party and Labour’s new national leader Sir Keir Starmer who replaced Jeremy Corbyn in the spring.

A former local Labour party officer Greg Hadfield tweeted: “I wouldn’t touch @bhlabour with a barge pole if @danieljyates was swimming in the cesspit in which his own shit is floating.

“It’s up to @BHGreens to decide how to deal with the toxicity of Sir Keir’s defecation.”

Councillor Yates replied: “I’m connected to the mains sewerage. Under new management, Keir is pressure washing away the detritus.” 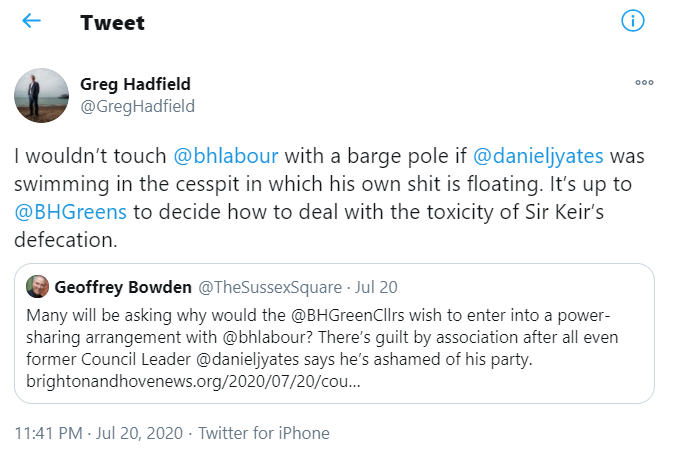 His tweet about “three dumb councillors” referred to them saying or doing “offensively dumb and discriminatory things – and then two of them run away”.

Mr Hadfield is also believed to have complained about Councillor Yates.

In July Councillor Yates said: “Politicians often believe that there is a form of words that will cover any eventuality and move things forward. Much of the time, this is true.

“Today, I am again ashamed of being a Labour city councillor due to the actions of those who would describe themselves as anti-racist but whose actions show them to be otherwise.

“Their actions and my powerlessness to change this makes being a politician an impossible task and brings shame on us all.

“I can only apologise for the hurt fear and betrayal these actions have caused those who we seek to represent and support.

“There is no action I can take to undo this. But I am and will continue to ask those with the power to act to do so. Our city deserves so much better.”