The owner of a set of “shacks” on Hove seafront will learn next month whether he can have a permanent drinks licence.

Luke Davis, who runs Rockwater, known for many years as the West End Café, wants to be able to sell alcohol from Shacks by the Shore, with the shacks resembling beach huts.

The current temporary licence was due to expire last week so Mr Davis applied to Brighton and Hove City Council for a permanent licence to sell drinks until 10pm.

But some neighbours have objected and now a council licensing panel has been asked to decide the application.

A petition was started last month by Maeve Davis, Mr Davis’s wife, to “save Rockwater’s Shacks by the Shore”.

The petition has more than 17,000 signatures although it is not included in the licensing panel agenda papers.

Labour councillor Carmen Appich, who represents Westbourne ward, which includes the Rockwater site, has offered her support although the council has redacted her details in the licensing panel’s agenda papers.

Councillor Appich, who is a member of the Licensing Committee, said that she was impressed with the community engagement carried out by Mr Davis and his management team.

She said: “I have met with some of the local objectors as well as with supporters.

“The fears voiced are around late-night noise, anti-social behaviour and crowd dispersal. However, I am not aware of any particular disturbances during the temporary licence period.

“Where additional security was needed, this was brought to the site quickly.”

One of the objectors, who lives in Walsingham Road, said that the shacks were a temporary measure and should be not be made permanent. 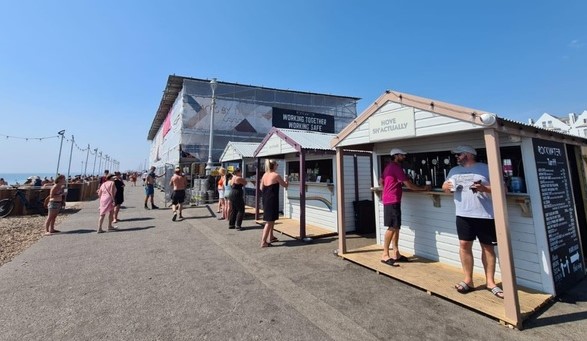 The objector, whose details were redacted, said: “We live in a quiet residential neighbourhood and noise from customers leaving the premises from 10pm onwards already causes noise disturbance.

“We have tolerated this until now but feel that enough is enough and the ability to sell alcohol from the outside shacks should now end.

“In addition, selling alcohol from the shacks has, in recent days, caused a huge amount of nuisance on the seafront in Hove and any continued use of these shacks will only exacerbate the issue.”

Another neighbour whose details were redacted said that crowds of people gathered near the shacks, prompting concerns about a lack of social distancing.

The anonymous neighbour said: “I don’t understand the need for this once the building opens.

“The beach huts are causing a nuisance for many residents. On Sunday 29 November the beach huts were serving drinks causing huge groups of people queuing and then standing around on the walkway.

“I saw several less able people in wheelchairs (and) using walking sticks unable to navigate the walkway to get past the crowds of people who were not being moved on by Rockwater.”

Rockwater’s solicitor Niall McCann said that the shacks were a “relatively low-key and simple affair”.

Mr McCann said that all but one of the representations were from people living in Walsingham Road, between 50 and 100 metres away from the venue.

He said: “The Shacks are located on the seafront itself facing out to sea. In between the Shacks and any residential addresses is approximately 50 metres of green space and a four-lane busy road with an additional parking spaces on each side.

“Not only does this create a noise barrier so that activity on the beach cannot be heard but also a considerable physical barrier to customers leaving the area.”

Mr McCann said that the beach next to the Shacks was busy throughout the year and he included a photograph of crowds taken on Christmas Day last year.

He said that 2020 had been an “exceptional year” as people tired of lockdown and flocked to the coast.

While some caused a nuisance, he said, many of the people who were drinking alcohol on the beach had brought it with them.

Mr Davis said that he was investing £4 million in revamping the venue, originally the West End Café, but more recently known as Venue, the View and Babylon Lounge.

His application is due to be decided by three councillors at a virtual licensing panel hearing on Tuesday 5 January.