What the Uber court ruling means – a personal view

What does the Uber court ruling mean and why does it matter? The following is a mix of facts and opinion and includes the difference between local cab companies and Uber.

It seeks to explains the different working models and the position that Uber is in now and which way it may operate following the court ruling.

The main question is how this affects the trade for local cab companies. Will all cab drivers who work for local companies no longer be regarded as self-employed and instead become employees and what will Uber do now?

The main difference with Uber is that it has always controlled all the money. It takes the fare directly from the customer, holds on to it, deducts the commission and only then pays the driver.

Additionally, it runs a rating system for drivers used by customers which is effectively a performance monitoring system. This is very much on par with where an employer carries out regular assessments on a member of staff.

When a cab company is run as an association or co-operative such as Brighton and Hove Streamline Taxis 202020 there is a major difference in that this type of set up is non-profit making and owned by the drivers being “full members”.

Effectively it is run like a club and any profits are paid back to the members or put back into the company for the benefit of the members.

All the full member drivers are equal partners sharing responsibilities and decision making and elect directors and committee members from the membership to head the company.

I have been a full member of Streamline for 38 years and we run a mixed fleet of private-hire vehicles and hackney carriages (taxis) with the council’s controlled tariff of fares.

With Streamline, there is a slight variation whereby there are also “associate members” who do not own the company but these members still benefit from being part of a non-profit making  association.

All fares taken by drivers on Streamline are paid direct from the customer to the drivers. Even the Streamline company app fares are paid out in full including account work with no commission deducted.

Financing the running of Streamline as a full member or as an associate members is paid for via a weekly or monthly subscription and not based on a percentage of work carried out.

There are many associations and co-operative cab companies like this throughout the UK and I do not see anything changing with respect to the employment case and such drivers will remain self-employed.

Even with privately owned companies, the general historic system is that the customers also pay the drivers directly (albeit not for account work) with no commission deducted and on a weekly or monthly subscription basis.

However, there are some privately owned companies that work in a similar way to the Uber model and this could make a difference as to whether drivers remain self-employed or not.

This is where dispatch systems are used, relying on an “app meter” to record the value of the fare – also known as a “soft meter”. It works via a mobile phone with the company driver app.

Generally, these are not allowed for hackney taxis as those meters need to comply to specific standards. They are sealed, with fares set by the local council and proper meters are used.

Where companies have the fare calculated by a soft meter, with the fares set by the cab company and not the local council, the fare total is sent back to the office and calculated and the customer charged either instantly or via an agreed method – and no direct payment is made by the customer to the drivers.

Where this system is used then the driver is paid at the end of the week or month minus the commission if applicable. Set fares may also be used instead of using the soft meter.

I consider that how the Uber employment case will now affect local cab companies is based on the working model of each company.

But if it is the same as the Uber model then there is a high chance that drivers on those companies may no longer be classed as self-employed and will now be employees of the company.

However, something that has not been mentioned in the news reports in the media but certainly has within the cab trade is that Uber had already made contingency plans to change its business model pre-empting that the employment court ruling went against them.

A few months ago, it bought a dispatch company called AutoCab which is a cab dispatch system that many individual cab companies use up and down the country. There are several similar systems used such as icabbi, Cordic and others.

By buying AutoCab and remodelling as an “aggregator” it can then use that network of individual cab companies that use AutoCab to move away from dispatching work directly and instead pass Uber work through these companies.

By doing this, it then relinquishes all responsibility of having drivers as employees with that liability being taken on by those individual cab companies, although that is dependent on each cab company’s operating model as previously explained.

In essence if you have a cab company called Joe’s Cabs which uses the AutoCab system then with your own company customer app there will be a choice to book an Uber car or a car from Joe’s Cabs.

This is how it was explained to those individual cab companies at the time although by now there maybe changes to the initial concept of the intended set-up.

I understand that cab companies using the AutoCab dispatch system are not obliged to be tied in with Uber but I expect that the established dominance of Uber will be the deciding factor. 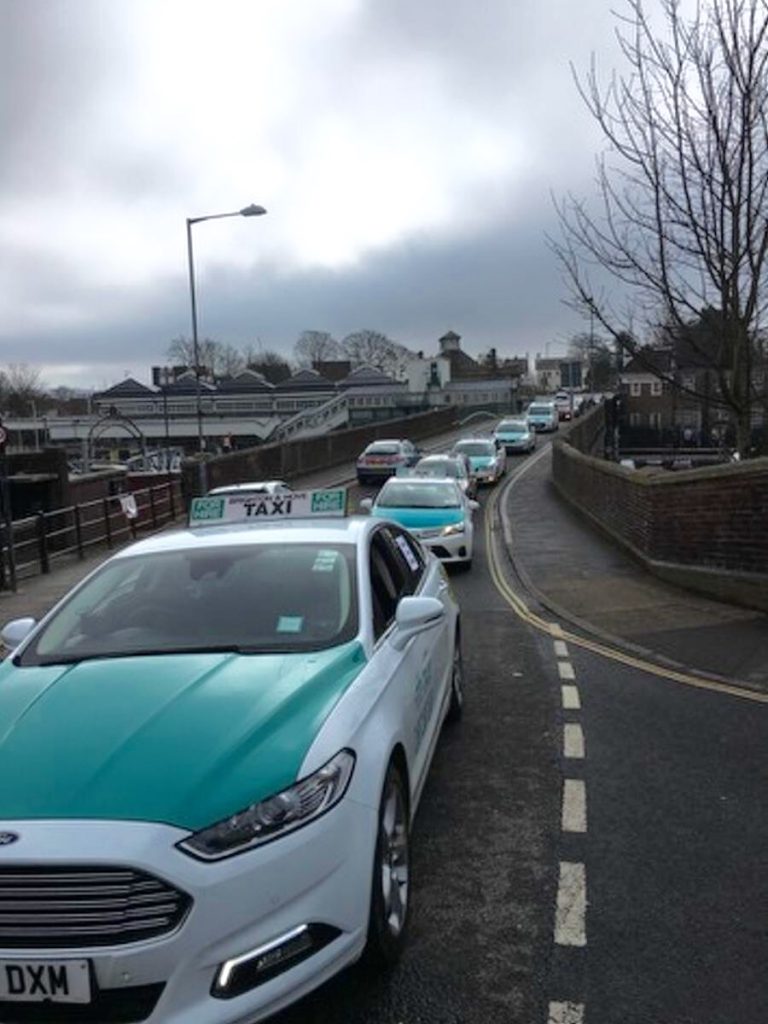 My own personal opinion on what will actually happen is that Uber will eventually end up selling back the same work that Joe’s Cabs originally had built up.

However, since then, the Competition and Markets Authority has launched a formal probe into the deal and would consider its “possible effect on competition, including in the supply of booking and dispatch software to taxi companies in the UK, and any potential impact upon consumers” and has delayed the Uber/AutoCab project.

There is also the question of VAT liability – of backdated VAT hanging over Uber – and now it is classed as an employer, the implications of VAT could be huge.

Unfortunately, the knock-on effect of Uber trying to dominate the world in the taxi and private hire trade while trying to revolutionise the so called “gig economy” may be to the cost of the viability of some local cab companies which do not have the resources to employ drivers.

Uber, the disrupting “technology company” that landed in the UK in 2012 has left what only can be described as a disrupting skid-mark in the taxi and private hire trade.

Andrew Peters is a Streamline driver and local GMB representative.