Four held in Brighton and Hove in knife crime crackdown

At least four people were arrested in Brighton during a week-long crackdown on knife crime, Sussex Police said.

The arrests were made by officers taking part in Operation Sceptre, a national campaign at the end of last month and the start of this month.

Sussex Police said that the force had taken a total of 272 knives off the street through amnesty bins, weapon sweeps and stop and searches.

Officers in Sussex made a total of 18 arrests for offences including having a weapon, drug dealing, having drugs with intent to supply, drug driving, being wanted on a warrant and assault.

Some 254 knives were placed in the amnesty bins, 21 stop and searches were conducted and test purchase operations were carried out as well as proactive patrols.

Sussex Police said: “Officers were called to report of an altercation in Grand Parade, Brighton, at 4am on Saturday (29 April).

“Officers attended and carried out searches of the men involved, seizing drugs and a knife.

“A 39-year-old man was arrested on suspicion of assault, attempted robbery and possession a class A drug.

“Both have been released under investigation pending further inquiries.

“During the search of a suspect a quantity of suspected class A drugs and a knife were seized.

“An 18-year-old man was arrested on suspicion of being concerned in the supply of class A drugs and possession of a knife.

“He has been bailed subject to conditions while inquiries are ongoing. 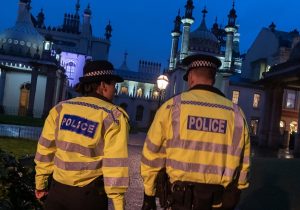 “Officers subsequently stopped a male behaving suspiciously near Albion Hill, in Brighton, at around 2pm and carried out a search.

“The suspect – aged 17 – was found to be in possession of 46 wraps of suspected class A drugs.

“He was arrested on suspicion of being concerned in the supply of crack cocaine and heroin.

“He was released under investigation pending further inquiries.”

Detective Chief Inspector Simon Yates said: “This week we’ve seen some fantastic results as our teams have worked together to take knives off the streets and arrest individuals in connection with serious incidents.

“It’s crucial that we continue to share our message that it is a misconception that carrying a knife makes you safer, as it actually puts you at increased risk of harm.

“Carrying a knife for protection is not a defence in law and even being caught with someone carrying can result in a sentence if you are caught.

“During Operation Sceptre we intensified our activities to target offenders and remove harmful items from the streets, but I would like to stress that our activity to combat knife crime is part of everyday policing.

“We have year-round operations to address knife crime including engaging with young people in schools, targeted days of action, and work with partners to ensure people are signposted to help at an early opportunity.

“There is help out there for those who do not feel safe, and we always have amnesty bins in police stations where you can drop off blades so they can be safely disposed of.”

Sussex Police said that Operation Sceptre was a national campaign to raise awareness of the dangers of knife crime and ran from Monday 26 April to Sunday 2 May.

Officers “engaged with” almost 4,000 young people and provided them with information and education around the harm that knives can cause.