Councillors have concerns about the £2.7 million cost of turning old offices into 11 flats for people needing temporary housing. 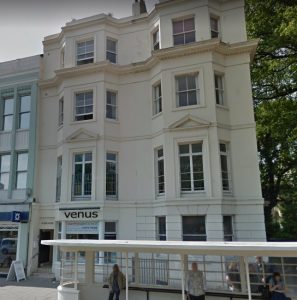 The Greens and Labour voted for the scheme to convert a Regency building in Old Steine and Palace Place, close to the Royal Pavilion, but the Conservatives voiced reservations.

Recently re-elected councillor Anne Meadows, a former chair of the council’s Housing Committee, said that the budget – after taking out the £890,000 cost of the land and building– might not be enough.

She told the committee yesterday (Wednesday 23 June): “There is a budget of £1.5 million to turn what is a very, very old, dilapidated building into 10 or 11 new flats, with all the associated sewage, water (and) all the other works that would be required.

“Plus safe walls between each flat, so there is security. That is not going to be cheap. I certainly don’t believe a budget of £2.66 million is enough to purchase the building and refit it as flats – especially if you intend to do it properly.”

She said that the Conservatives did not want the scheme to proceed because it would cost far more than the budget and would not provide value for money.

The Housing Committee was told that the market rate for the building was about £950,000.

If the council sold the building, Councillor Meadows said that the extra £60,000 could provide free water taps across the city.

Green councillor David Gibson said that the council would benefit financially from not spending money on paying private landlords for temporary accommodation if the scheme went ahead.

Councillor Gibson said that the conversion costs were quite high as the work proposed was extensive and he said: “I hope the costs have been properly estimated. Only time will tell.”

He had been around the building, he said, agreeing that it was in a “dilapidated state” but he had been assured by officials that it was structurally sound.

He added that work to convert the building, which most recently housed the Café Domenica charity, would be carried out to high sustainability standards.

Labour councillor Gill Williams said that she had received many emails raising concerns about the vulnerable being housed in the centre of Brighton.

The council’s interim assistant director of housing Martin Reid said that officials would create a letting plan to ensure there was a “careful view” of who was occupying the building.

There would be security, new lighting and CCTV.

The Housing Committee voted two to one in favour of the scheme which will still have to be approved by the council’s Policy and Resources Committee next Thursday (1 July).