Sussex Police published a picture of a man suspected of being involved in a violent attack in which the victim was hit with a broken bottle. 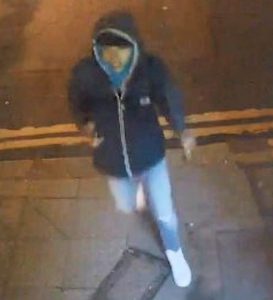 The force said today (Thursday 5 August): “Police have issued a photo of a man they want to interview about an attack on another man in St James’s Street, Brighton.

“At about 1am on Saturday 31 July the 44-year-old victim had been walking with a friend along St James’s Street, Brighton, and had just turned into a road off the main street, near the Co-op, when he was struck in the face with a bottle and then with a broken bottle by each of two men.

“He was then kicked in the chest and fell to the ground.

“He was taken to the Royal Sussex County Hospital for treatment and was discharged later the same night. The man he was with was not hurt.

“Nothing was reported to have been stolen

“The two assailants, who are believed to have been with at least one other man, then made off along Margaret Street.

“The two are both described as south Asian, about 5ft 5in to 6ft, of slight build and in their early to mid-twenties. It is not yet clear which of the two men is in the photo.”

Detective Constable James Botting said: “We are still investigating to establish the motive for this isolated attack.

“Anyone who can identify this man or who saw what happened can contact us either online or by calling 101, quoting serial 83 of 31/07.