Rail bosses have warned passengers to expect disruption and allow extra time for their journeys at the weekend as emergency work is carried out to repair damaged track.

Network Rail, Southern and Thameslink have all said that replacement buses would be laid on but their advice was to stick to “essential travel only” on Sunday (15 August).

They said: “Emergency work to replace two damaged rails on the Brighton main line means passengers on the route are being urged to travel only if necessary this Sunday morning.

“Leaving those defects unfixed could result in a broken rail.

“For that reason, from around midnight to 2pm on Sunday there will be major changes to train services on the route.

“There will be an extremely limited train service with only one train every 90 minutes between London and Brighton, via Gatwick Airport.

“Challenges with bus driver availability due to covid and major engineering work on other routes also means only a very limited replacement bus service will run between Redhill and East Croydon.

“It comes on top of major engineering work between Three Bridges and Arundel planned from Saturday 14 August to Sunday 22 August when £22 million will be invested to improve stations and replace old signalling and track.”

“Our advice is to travel only if you absolutely have to while the work is taking place on Sunday morning as we simply do not have the resources to run enough buses to carry everyone safely. 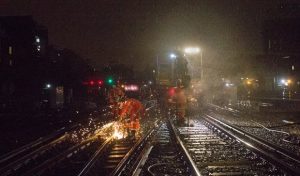 “We’ve got one line open, which will allow a very limited train service to run, but nowhere near what we would need to carry the normal number of passengers to the beach on a Sunday morning.

“Our team has tried to find different ways of getting this job done but we can’t put it off any longer and have to take this action now.

“Our test train picked up invisible defects inside two rails near Purley and the location of those rails means we will have to cut the damaged sections out and replace them.

“We’re keeping the line open until then by running trains more slowly but that won’t work beyond a few days.

“And we have to balance the need to carry passengers to the airport and the beach this weekend with our ability to do it safely.

“The nature of this problem means closing the line overnight Saturday and Sunday morning is the least-worst option.”

Journey planners will be updated on Saturday 14 August and passengers were advised to check their journeys before they travel for the latest information and the best journey option.