A music school has been given planning permission to take over the old Argus newspaper offices in Brighton. 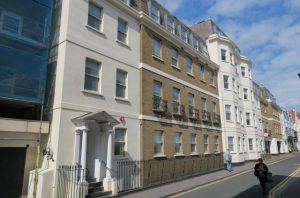 The British and Irish Modern Music Institute (BIMM) was granted permission for a “change of use” for Dolphin House, in Manchester Street.

The building, which is opposite the Latest Music Bar, was also home to the EC Language School.

Independent councillor Tony Janio was among those concerned about noise while others were worried about the traffic and travel consequences of about 1,000 students a week coming and going.

The further education college, which offers specialist music diplomas, degrees and postgraduate courses, would have no more than about 200 students inside on any one day. Start and finish times would be staggered, councillors were told.

BIMM’s planning consultant Ken Parke said that all teaching rooms would have sound insulation and that the building would also be used as offices and a library as well as for music lessons.

Conservative councillor Carol Theobald said that there was no “dropping off” point even though some students would have large instruments such as a double bass.

A transport plan is required as one of the planning conditions.

Councillor Theobald said: “It’s been out of use for some time. This is an excellent use of the building as long as it is not too noisy for neighbours.”

Labour councillor Daniel Yates said: “I know that BIMM has been a bit dispersed around the city in recent years and it’s good to see them bring some stuff together in a more central point.

“It will be a sad loss for Moulsecoomb, who’ve had a BIMM presence for quite some time. Overall, this is a sensible application and it seeks to make use of existing space which is unlikely to be used as a language school in the near future.”

It opened at its first centre in Brighton in 2001 – as the Brighton Institute of Modern Music.

After opening its Dublin college in 2011, it changed its name to the British and Irish Modern Music Institute.