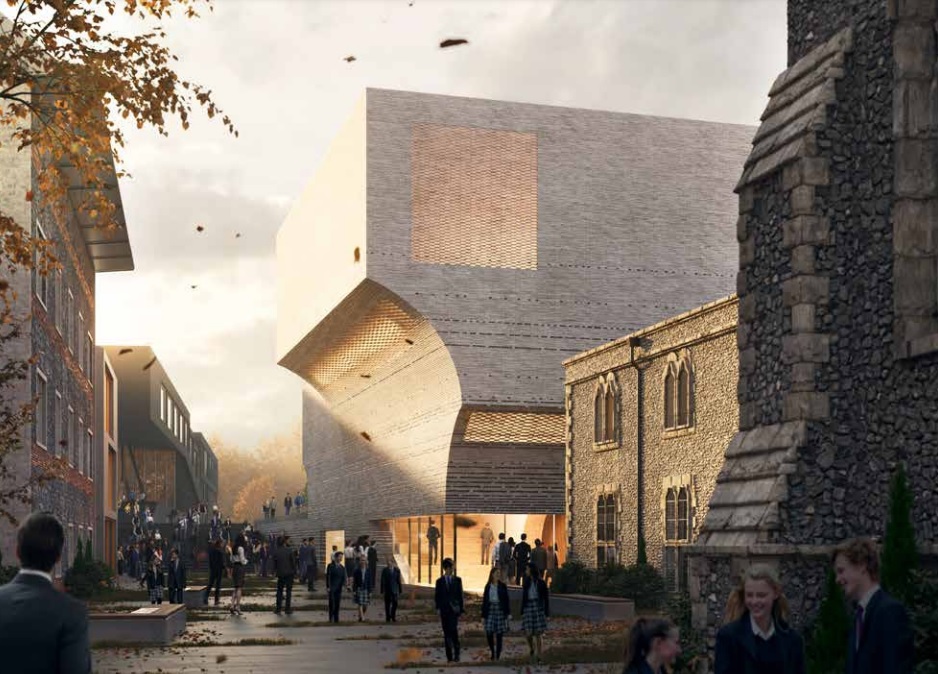 A private school’s plans for a new 400 seat theatre, studios and multiple classrooms go before city councillors next week.

In its application, the school describes the new building as the “grand finale” of its ten-year master plan for redeveloping the campus.

The new building would be at the centre of the site, the location of the 1980s Lester building, the 1950s science block and existing performing arts centre built in 2000.

None of these buildings earmarked for demolition are listed and in August the council granted planning permission to demolish them to make way for the new structure.

The college campus is a conservation area and the buildings forming the college’s main quadrangle are Grade II listed.

The proposed building has 3,180sqm of floorspace over three levels plus a basement.

It would be built of light grey stone with square knapped flint accents.

Brighton College’s planning agents Litchfield said in its statement: “This is an exciting proposal for Brighton College, which would allow them to improve and enhance the learning experience for the pupils in their performing arts classes and provide break out spaces.

“It will replace buildings of neutral or detracting contribution with a high quality performing arts centre which will inspire pupils using the space.

“The proposed building is of a scale, mass and bulk that is suitable to its surroundings.

“The proposed performing arts building is a high-quality, contemporary building that has beendesigned to respond to the surrounding buildings whilst also designed to have a strong presence within the campus.”

Nine neighbours have objected to the plans raising issues about noise during construction, parking problems and disturbance after years of building work.

One resident, whose details are removed on the council website, said: “It looks to entail another lengthy period of development, following immediately on from the five years of disruption caused by the erection of the science and sports building.

“As a resident of the area – and someone who works from home – I have endured near constant noise pollution and regular traffic disruption as a result of the previous project. My neighbours and I are concerned by the possibility of another five years of the same.”

Another neighbour said: “Parking is already a problem with parents and staff parking on-street rather than on college property.

The application was lodged in May, which means the council has exceeded the 13 week time limit to decide it.

This means the committee can only say whether it would have been minded to grant the application or not.

This would be taken into account if the college decided to appeal on the grounds the council had not decided the application in time.

The Planning Committee meeting is at Hove Town Hall from 2pm on Wednesday 6 October.

It is scheduled for webcast on the council website.