A fire at a waste transfer site in Brighton last week – the third in just over two years – has reignited neighbours’ concerns about safety.

Brighton and Hove City Council said that the fire last Wednesday (29 September) was small and had been brought under control quickly.

But people living in the Round Hill area were shocked when smoke started billowing out of the Hollingdean waste site once again.

The fire comes two years after a major blaze, in August 2019, when spread smoke across a wide area. And there was a minor fire there in September last year.

After the first fire, residents’ representative Dominic Furlong shared his neighbours’ concerns with councillors at a meeting of the council’s Environment, Transport and Sustainability Committee in November 2019.

At the same meeting Green councillor Pete West asked for a review into whether the waste transfer site should be at the site in Hollingdean.

After the second fire, Mr Furlong emailed Green councillor Amy Heley, who chairs the committee, to ask about the report – and he did so again after the latest fire.

He said that he was still waiting to hear how the report was progressing.

After the latest fire, Mr Furlong said: “Despite assurance from Veolia that it’s just ordinary household waste being burnt, the mix of waste substances isn’t monitored or controlled.

“The fumes from these fires, therefore, pose an inherent risk to public health and safety.

“Hollingdean has had an active waste site for over 100 years but, a century ago, the site was on the very edge of town.

“Nowadays, the waste transfer site is situated in a densely populated residential area with Downs Infant and Junior Schools very close to the site. Its location is unsuitable and unsafe.”

More than 2,000 people objected to the waste site and materials recovery facility at Hollingdean before the council approved it in 2006. 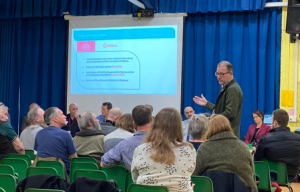 Councillor Pete West at a meeting after the Hollingdean fire

Mr Furlong said that the materials recovery facility had a sprinkler system but the waste transfer station did not.

He said: “The waste transfer site design is not the one originally proposed and does not have doors that seal as anyone who lives close can smell on many days of the year – and as evidenced by all the gaps smoke escaped from during the fires.

“Residents do not feel listened to on these issues and many have given up after years of complaints seem to have fallen on deaf ears.”

The council said: “We are very aware of the concerns expressed by a number of residents who live near the Veolia waste transfer site in Hollingdean.

We agreed back in late 2019 for officers to review of the site’s suitability as a waste transfer facility, and to report their findings back to the Environment, Transport and Sustainability Committee.

“However, work on this was postponed due to the intense and unforeseeable pressures the council has faced since the start of the pandemic.

“We would like to apologise to residents for this.

“Our Cityclean service is still under extreme pressure due to the pandemic, the national HGV driver shortage and national problems affecting the recruitment of agency staff.”