Councillor urges people to ‘get jabbed’ 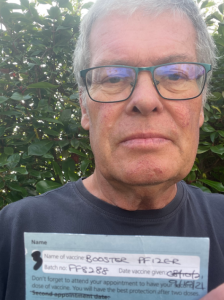 A councillor and nurse has urged people to go for a jab – whether its their first or second covid jab, a booster or their seasonal flu jab.

Peter Atkinson, the independent councillor for North Portslade, spoke out after going for his coronavirus booster jab.

Councillor Atkinson said that he was concerned that Britain was falling behind other countries on the number of people vaccinated.

And Brighton and Hove trails the national averages. Locally, only about 72 per cent of people over 12 have had their first covid jab, he said, while about 66 per cent have had the second jab.

Councillor Atkinson said: “After a good start in this country, we seem to have really slowed down.

“And the vast majority of people now being admitted to hospital or intensive care units are unvaccinated. That speaks for itself.

“Not only is this avoidable but it also denies people who need an intensive care bed for after-care following serious operations the chance to have their op.”

Councillor Atkinson said, who is also a nurse, said that he was also worried that people may think they are protected from flu if they have had the covid jab which is not true.

He said: “Many of us will be extremely vulnerable to flu this winter as we didn’t build any immunity last year due to lockdown and not mixing with other people.

“It’s vital that we all get the flu jab either at work or from our GP.”

Councillor Atkinson had his covid booster at the Churchill Square vaccination centre and was in and out very quickly.

“It was efficient and very straightforward,” he said Peter. “A credit to the NHS.”