Property developer with mission to convert church in Brighton

Plans to turn a former church hall in Brighton into flats face opposition from neighbours and a councillor.

The plans for a two-bedroom flat and eight studios in the Hanover area are due to be decided by Brighton and Hove City Council’s Planning Committee on Wednesday (3 November).

Officials have recommended turning down the planning application from Mike Stimpson Properties because the proposals do not provide a “good mix of units” and the studios would be “cramped”.

The developer said that all nine flats would be available to let for a “social” rent through a Rent Smart Partnership Agreement.

“Social” rent levels are cheaper than “living wage” and “affordable” rents, with the latter set at 80 per cent of local market rates.

Mike Stimpson Properties said that the company wanted to link the Hanover scheme with another scheme for 14 homes in Foredown Road, Portslade.

The company would like to offset any “affordable” homes required in Portslade by offering to let the entire Bentham Road scheme for “social” rents.

The planning application said: “The application site has not been used for religious or community purposes since 1990.

“(It) is a rundown brownfield property which urgently requires investment and a new use to secure a sustainable future for the building.

“The proposals would make an efficient use of the building while making a meaningful contribution towards housing supply in the city (100 per cent affordable housing).

“Furthermore, the change of use would secure visual improvements to the application site and the wider Bentham Road street scene.”

But neighbours have sent 37 letters of objection and Green councillor Steph Powell, who represents Hanover and Elm Grove ward, has asked to address the council’s Planning Committee. 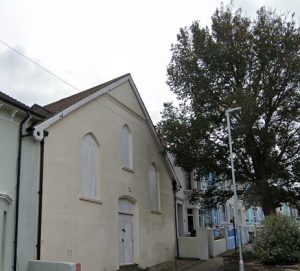 Councillor Powell criticised the “cramped” studio flats and the small bin store in a letter, adding: “A huge and majestic elm tree sits right at the front of the current site.

“This absolutely must be retained. The biodiversity survey as listed in the documents does not acknowledge the bats and foxes which I believe have been spotted on the site, as well as a number of different species of birds.

“If this development were to go ahead, then I believe that it would be contrary to the biodiversity and carbon reduction policies as set out in City Plan Part 2.”

But fellow Green councillor David Gibson, who also represents Hanover and Elm Grove, is keen for the plans to be approved.

He welcomed the prospect of a scheme with rents that would be cheaper than the local housing allowance rate as well as the promise of tenancies without the need for a deposit.

Councillor Gibson, who co-chairs the council’s Housing Committee, said: “For me, these are important benefits which at a time of housing crisis are to be had from a building that has been empty for over 20 years.

“By supporting the application, it will ensure that the benefits can be assessed properly by the councillors on the Planning Committee and weighed up alongside any drawbacks.”

The committee is due to meet at 2pm on Wednesday (3 November) at Hove Town Hall. The meeting is scheduled to be webcast on the council’s website.