Brighton tennis player Sonay Kartal has won the domestic trophy that US Open winner Emma Raducanu credited with helping to propel her to global success. 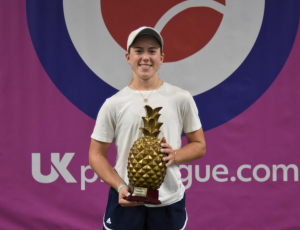 And Kartal, 20, said that she could follow in Raducanu’s footsteps, having overcome a number of injuries to claim the UK Pro League title.

Kartal lifted the trophy in Shrewsbury last night (Sunday 14 November) after a 6-0, 6-1 win over Freya Christie, who is ranked ore than 300 places above her.

Her performance further enhanced her reputation as one of British tennis’s most exciting young prodigies as she claimed a prize pot worth £15,000.

Kartal, who stormed to consecutive titles in weeks 5, 6 and 7 of the competition, grew up playing against Raducanu – and remarkably boasts a 6-5 winning record against the Bromley hotshot.

And after succeeding Raducanu in claiming the coveted UK Pro League crown in its second season, the world No 989 said: “I’m really going to try and continue this form.

“I’ve had a lot of injuries in the past, so I’ve really capitalised on the UK Pro League.

“You’re guaranteed five matches, so the format for me has been really beneficial – and it’s something that I’m definitely going to continue on next year.

“I’m very grateful for all that’s been put on this year. I didn’t practice too well earlier so I was a little bit nervous coming out but I just tried to forget the occasion and play my own game.

“The highlights for me have been that I’ve managed to keep a pretty consistent game throughout this whole week. I did lose to Katie (Stresnakova) in the last round of the groups but I think I’ve taken some good match practice from the experience.

“I’m off to Tunisia for another event next week so I’ll be looking to bring my form out there.”

Nine individual qualifying weeks culminated in UK Pro League Finals Week when the country’s top professionals descended on Shropshire to battle it out for the men’s and women’s trophies.

Raducanu, 17 at the time, credited her UK Pro Series title in Weybridge last August for laying the foundations for her ascent to the grand slam summit.

She breezed past Jodie Burrage in Surrey and has embarked on an inexorable upwards trajectory across a thrilling 12 months, culminating in being crowned queen of Flushing Meadows. 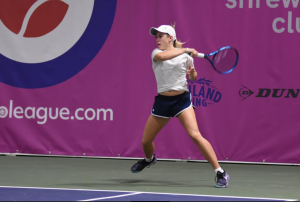 Kartal won three weeks on the spin of this year’s competition before turning it on when it mattered to grab Finals Week glory.

She stunned Lily Miyazaki – the world No 215 – in the quarter-finals in a tie-break and beat experienced Beth Grey – ranked over 500 places above her – in the semis.

Yesterday afternoon Kartal breezed past Christie, the world No 628, to solidify her reputation as one of the nation’s brightest stars and many tennis pundits are tipping her for stardom.

Defeated finalist Christie said that she had been unable to deal with the Brighton ace’s firepower and the 24-year-old said: “Credit to Sonay today. I think she missed about one ball the whole match. So well played to her. I’ll have to take that one on the chin.”

With a prize fund of around £500,000 and Broadcast live on BT Sport, FreeSports the Tennis Channel and UKproleague.tv, the UK Pro League is the only place where the British player group come together to compete across the full year.