Shame put on a ‘Concrete’ performance in Brighton 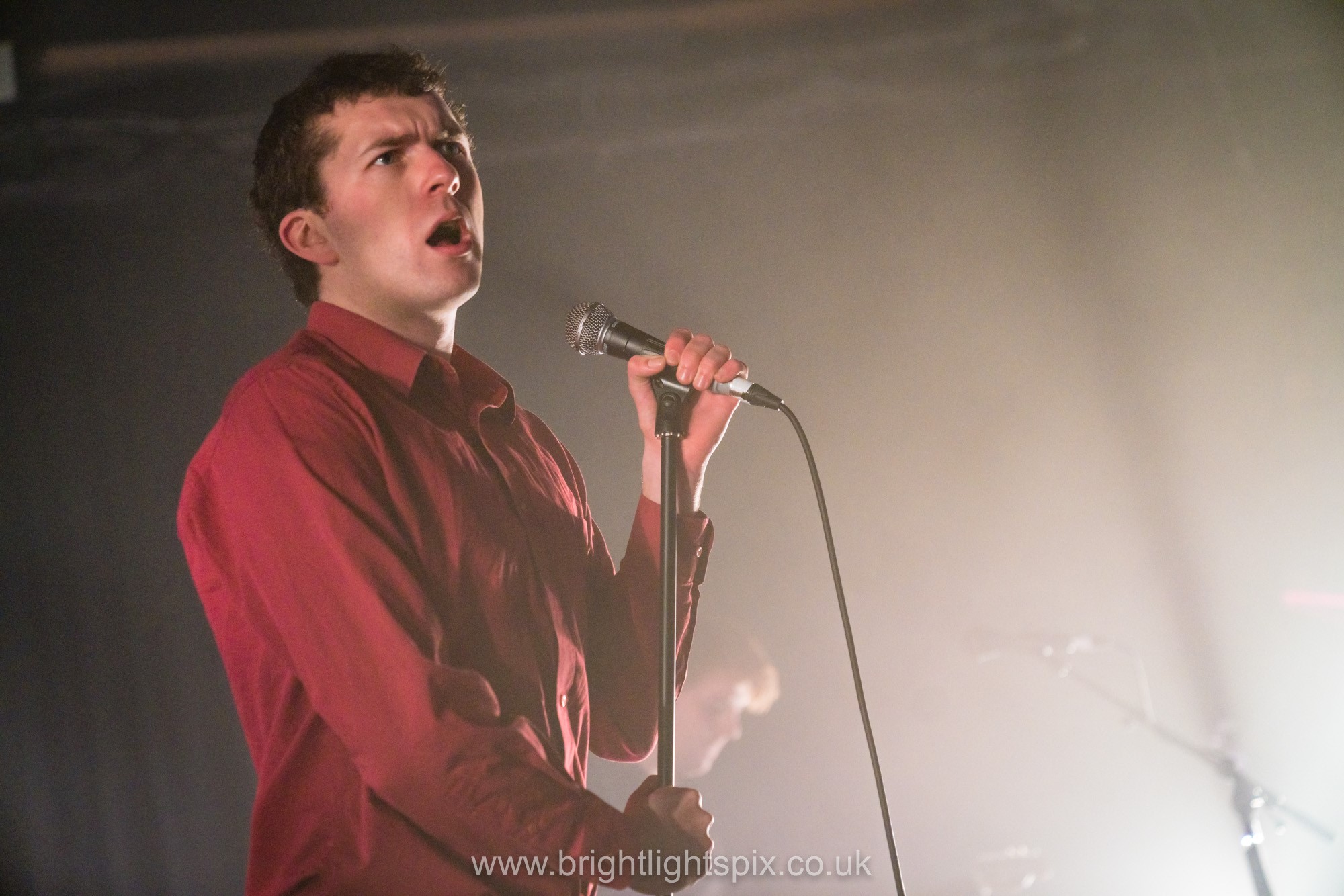 Shame (stylized as ‘shame’) were amazing live at CHALK tonight. Probably the best gig since the return of live music after lockdown.

But first a mention of the two supporting bands, The Ümlauts and The Goa Express. 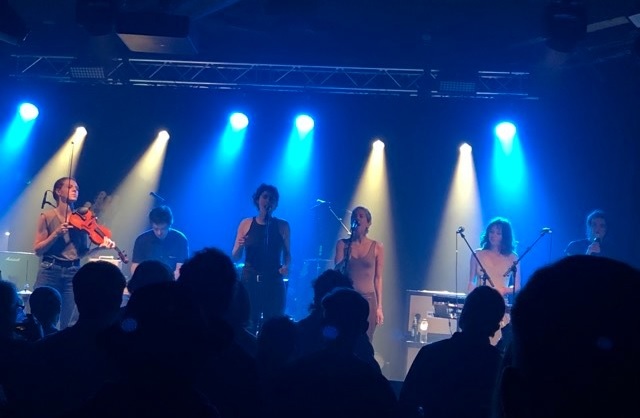 I arrived part way through The Ümlauts set, and it was a very strange first impression. The two female vocalists were making noises from their throats rather than singing words. (Similar to Tibetan throat singing, I think.)

The Ümlauts live at a previous concert at End Of The Road Festival 4.9.21 (pics Sara-Louise Bowrey) (click pics to enlarge)

The band was a mix of 3 keyboard players, 2 drummers and a violinist. Surprisingly the combination of electronic dance beats and violin worked. After that song the singers were more conventional with a punk style delivery sung in German. (Clue in the band’s name, Ümlauts, although they formed at Wimbledon Art College.) Their sound grew on me as their set continued.

Check out their work HERE. 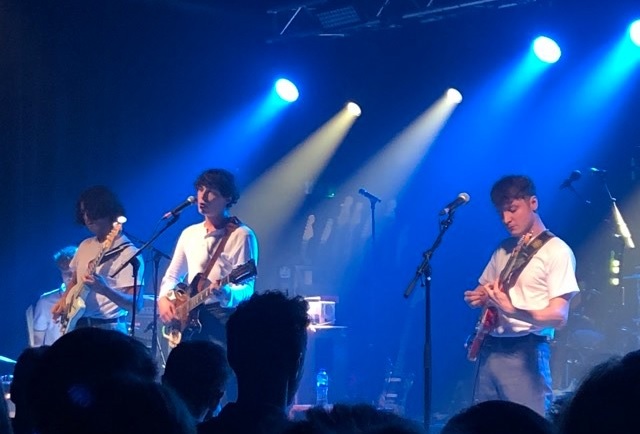 The middle band, The Goa Express, were a late replacement for Wet Leg who it seems have possibly pulled themselves off of the support slots as they are doing very nicely at the moment and so expect headline concerts to be announced in due course. 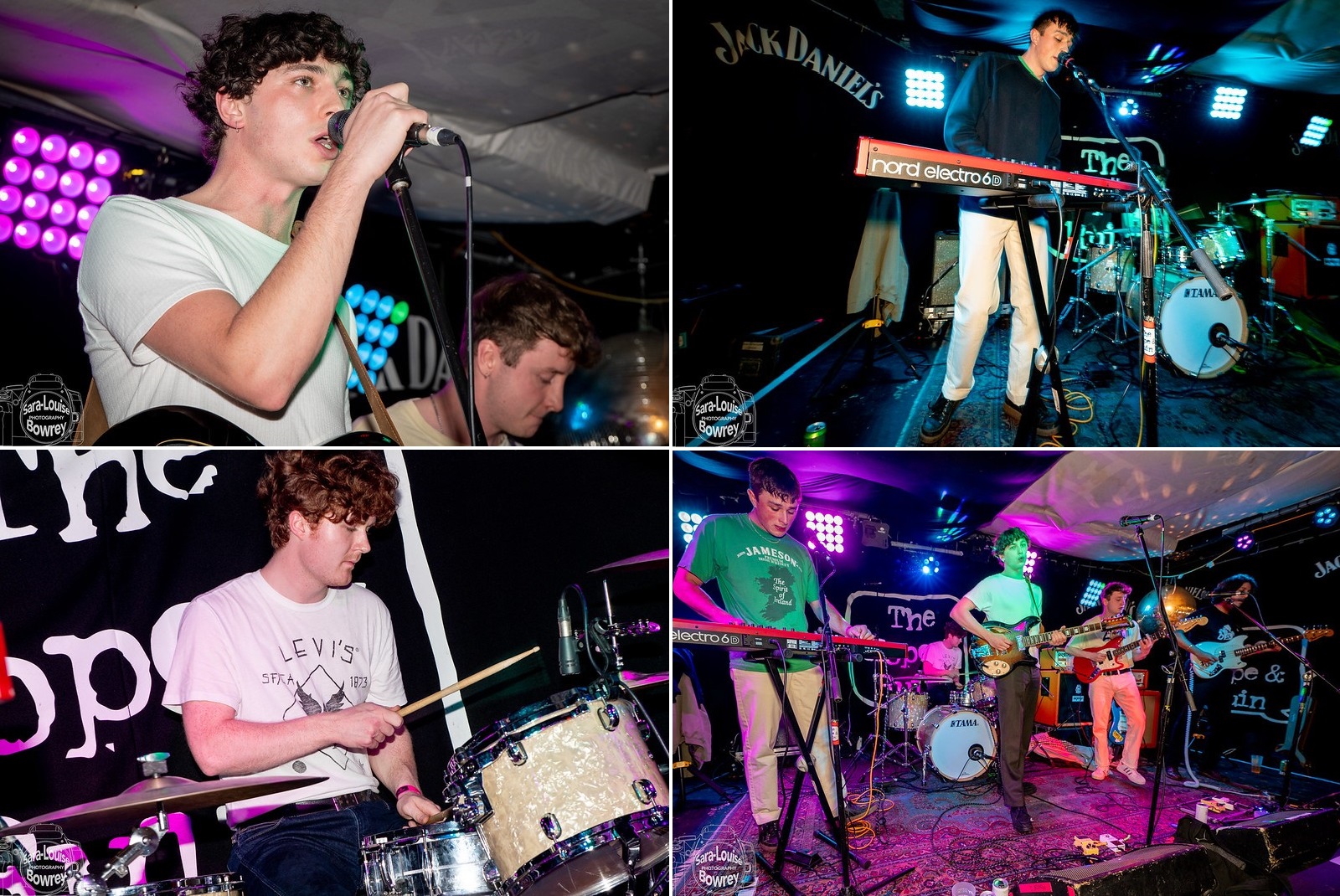 The Goa Express at a previous concert at the Mutations Festival 6.11.21 (pics Sara-Louise Bowrey) (click pics to enlarge)

The Goa Express are one for those who like the indie guitar pop sound of the late 1980’s. A group of friends originally from Burnley, they are a decent band with some very good tunes. As a young band they show some promise. In my opinion they need to be more distinctive and develop their own identity and sound. Worth keeping an eye on though. 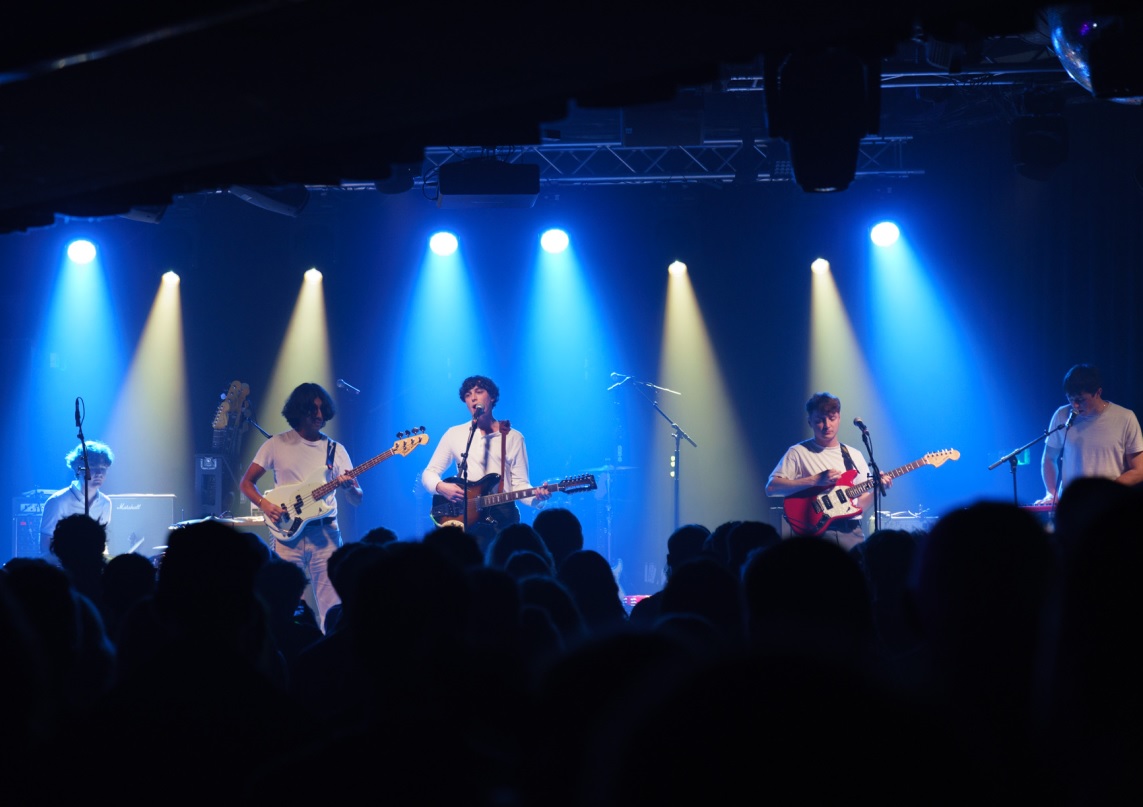 Check them out on Bandcamp HERE and find out about their ‘Overpass’ 7” HERE. 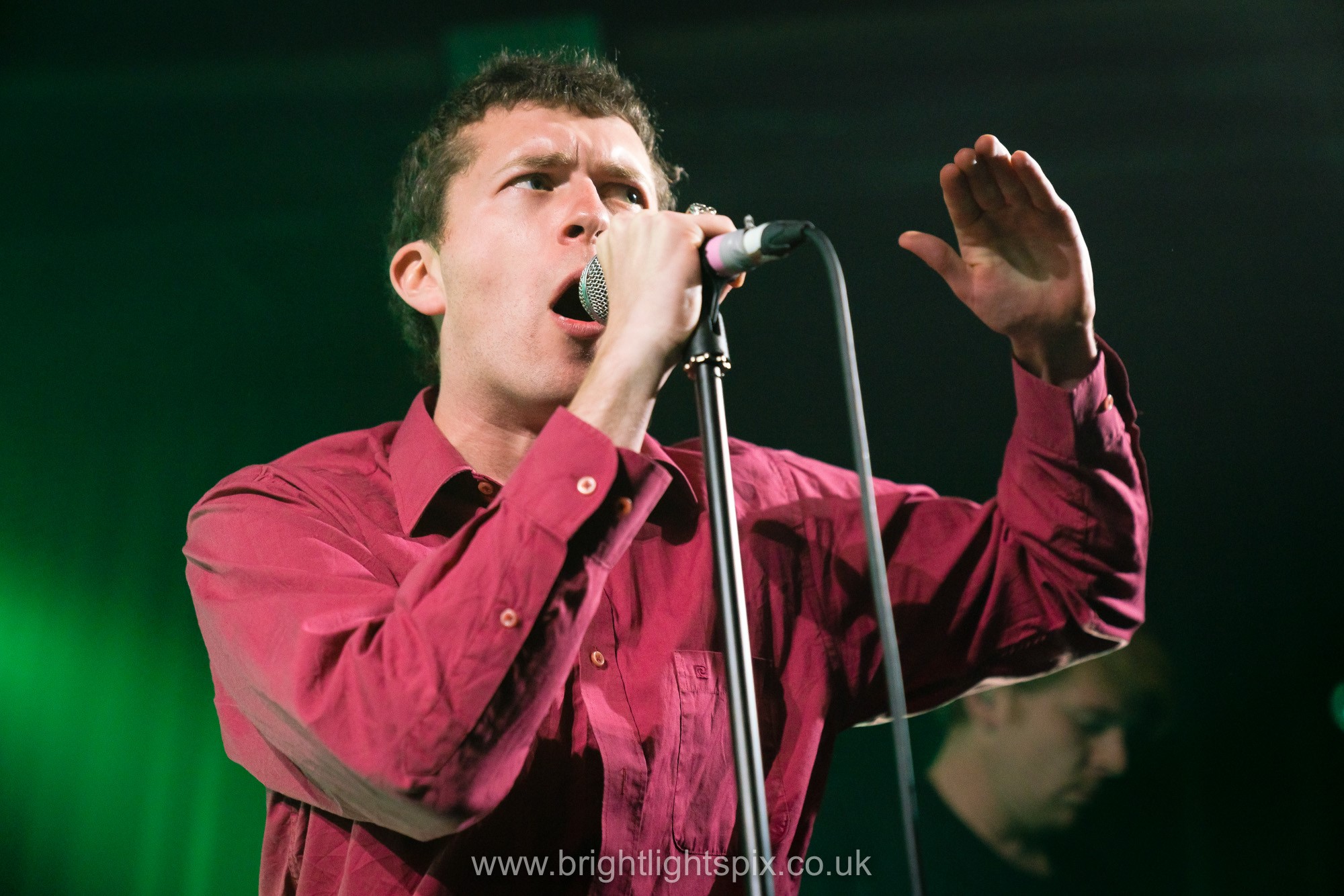 Onto the main act, shame who are Charlie Steen, Eddie Green, Charlie Forbes, Josh Finerty and Sean Coyle-Smith. In my opinion up there as one of the top live bands around. They emerged from the blossoming South London scene associated with the Brixton venue The Windmill, along with the likes of Goat Girl. 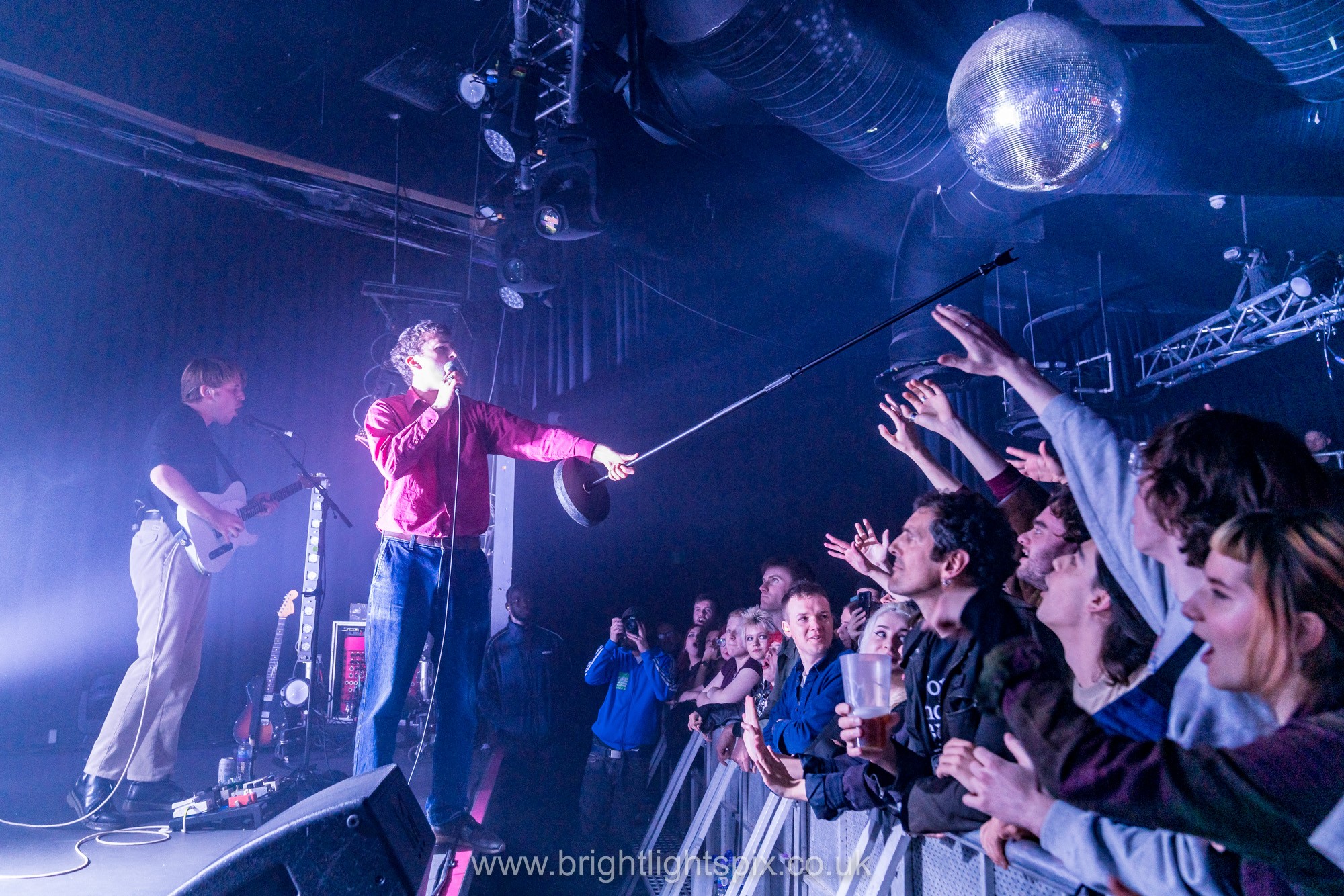 shame finally get to tour their new album, ‘Drunk Tank Pink’. As good live as their superb debut, ‘Songs Of Praise’. Opening their set with the lead single from the new album, ‘Alphabet’, it was the usual energy from this post-punk outfit. Best mosh pit since lockdown with Charlie Steen, lead singer crowd surfing. (Thankfully Covid vaccination proof is required to get into the venue.) If a lead singer goes into the crowd the musicians in the band need to be good to keep the set together. 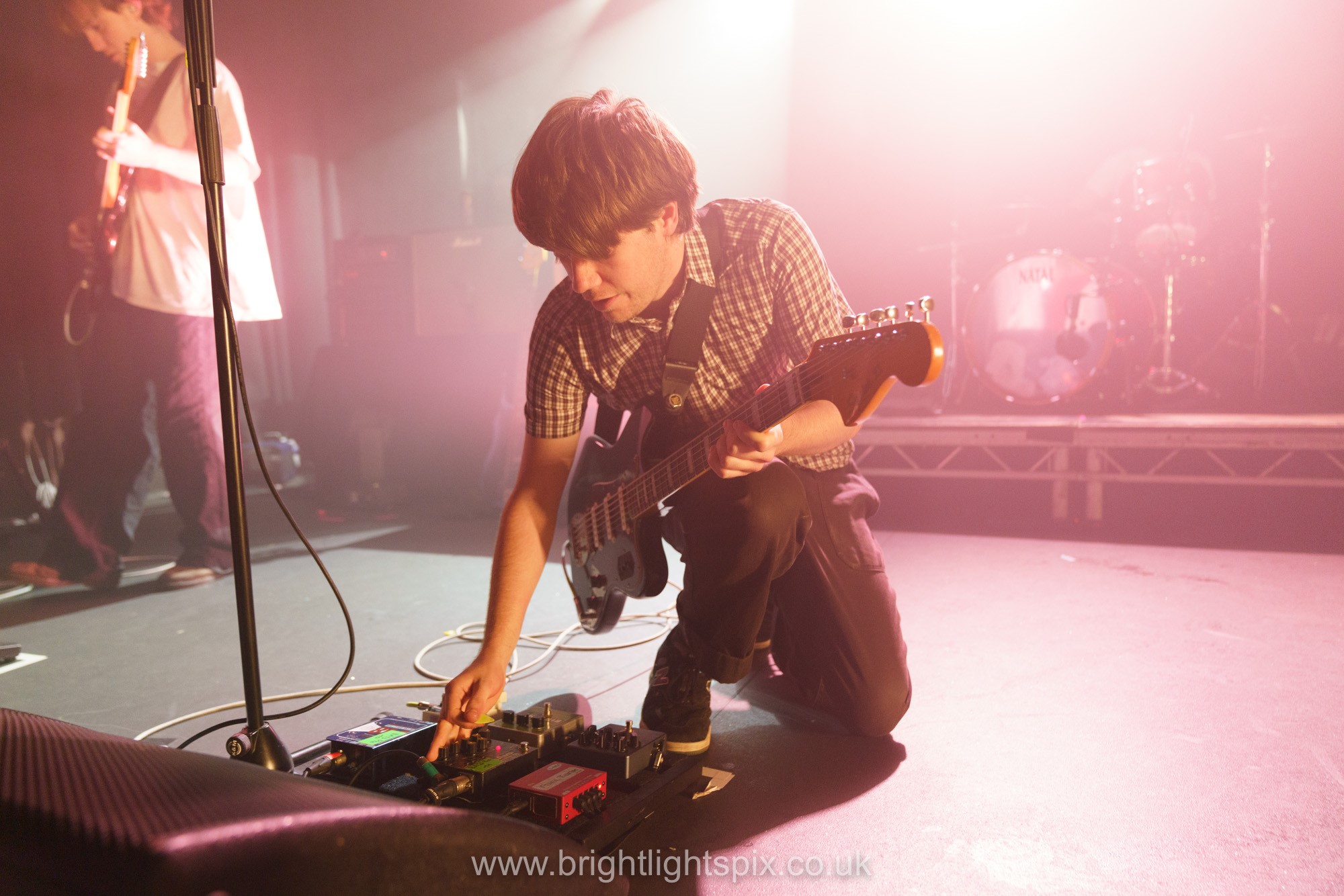 Charlie does get the limelight fronting the band, but the rest of the band are very good. In a touch of irony, this was referred to in the intro to their penultimate track, “here’s a song we now think we’re tight enough to play”. It was ‘One Rizla’, their debut single, written when they played the pubs in Brixton. If I’m really critical, it should have been the last song. 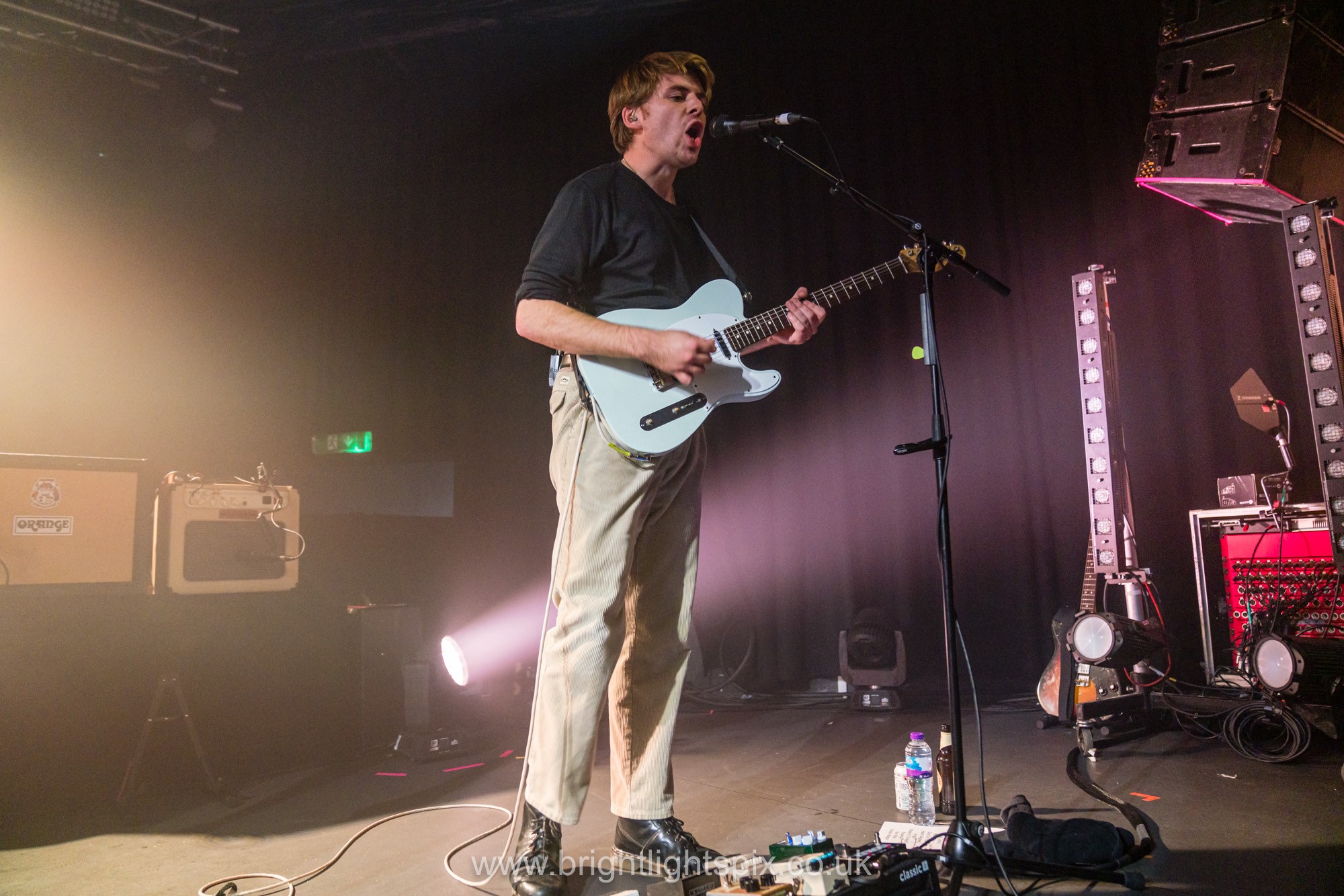 They strangely finished their set with a slow number, ‘Station Wagon’. A good song, but a mid-set track. That is really harsh given the band were brilliant from start to finish. 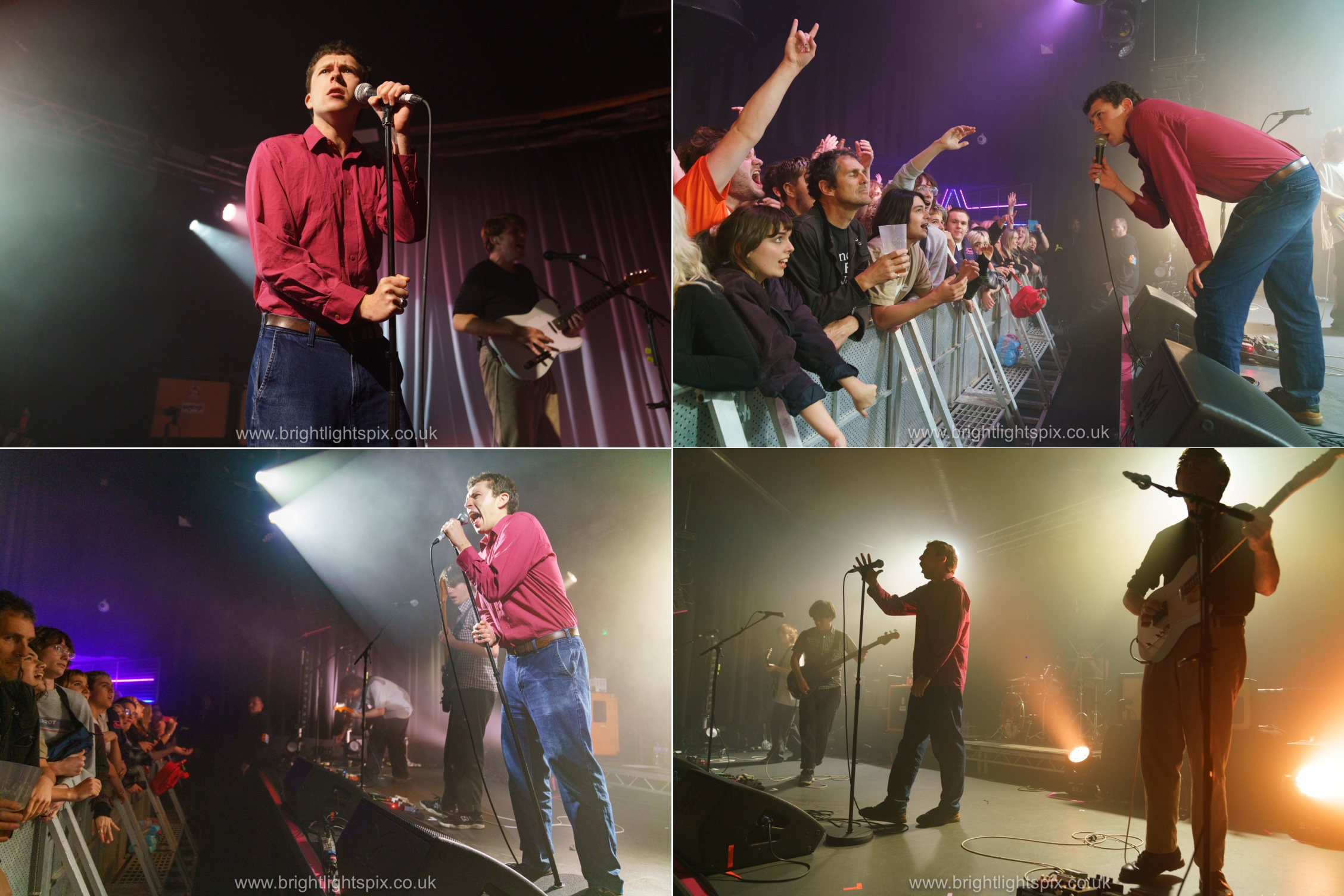 If you get the chance go and see shame live. Great every time I’ve seen them. 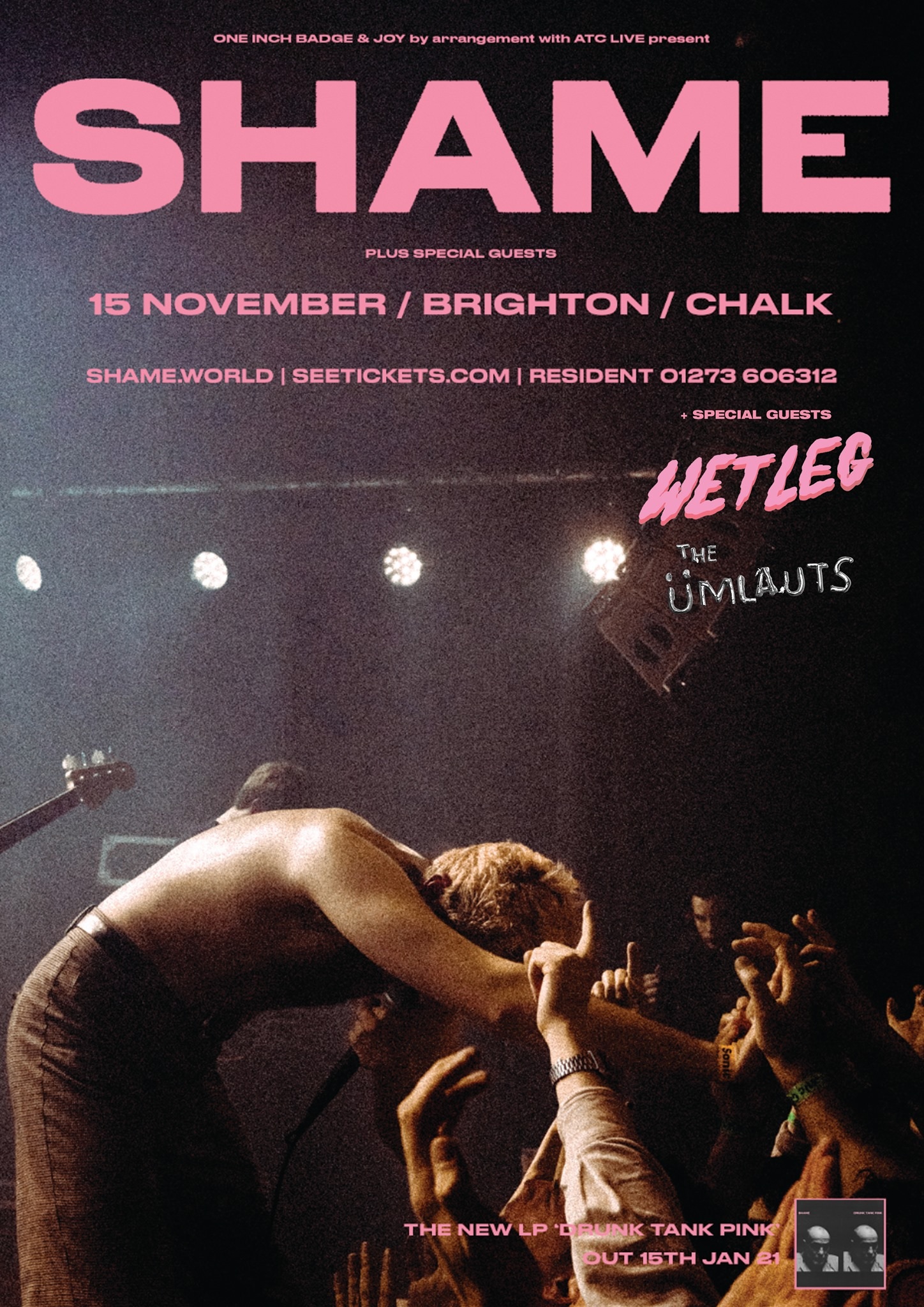 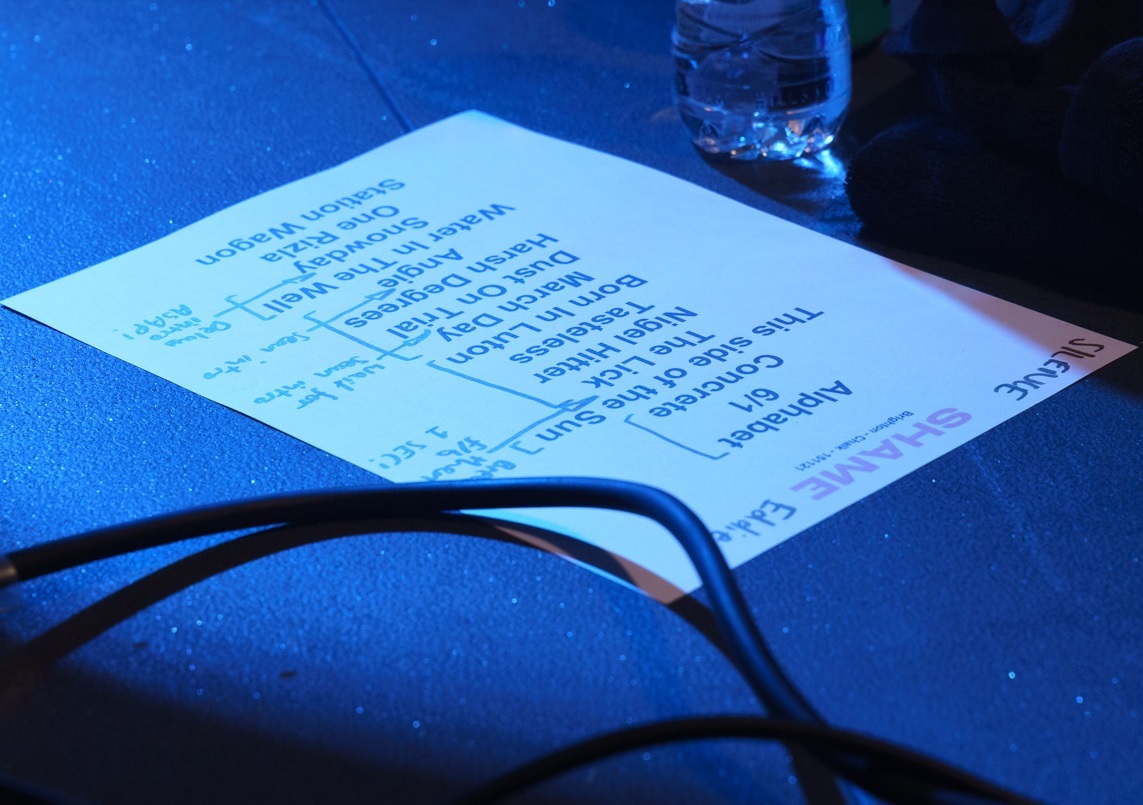