Brighton takeaway’s future in doubt after planners step in

The future of a family-run takeaway van is in doubt after the owners were told to seek planning permission.

The Cambodian Kitchen van has been trading from the driveway of the family home, at the bottom of Coldean Lane, Brighton.

Brighton and Hove City Council issued an enforcement notice in March because the business was operating without planning permission.

And officials have recommended that the council’s Planning Committee turn down the planning application that has since been submitted.

They said that that a hot food takeaway conflicted with the character of the area and was an “incongruous addition to the residential setting”.

The business owner Meyley Pitman contacted the council before starting the business and said that she was told that she did not need a food trading licence because the van was on private land.

Mrs Pitman also said, in her planning application, that she was not told that she needed to apply for planning permission and started her business “in good faith”.

She said that Wild Flour Pizza, in Ovingdean, was an example of a takeaway in a mixed residential area.

And, she said, Coldean Lane was not “traditional and tranquil” because there were takeaways and a pub just down the road.

The council refused to grant planning permission for Wild Flour Pizza but it was approved on appeal.

Mrs Pitman said: “The appeal scheme involved the takeaway operating from a building with outdoor oven and seating areas.

“The hot food takeaway (in Coldean Lane) is less intensive, with a small trailer providing cooking and service facilities, with no customer seating available.”

Mrs Pitman serves food from the van three evenings a week from 4pm to 9pm and added: “Cambodia Kitchen has proved very popular with the local community and is just a part-time operation.

“I’m keen to continue serving the local community I love at weekends if the council allow me to.” 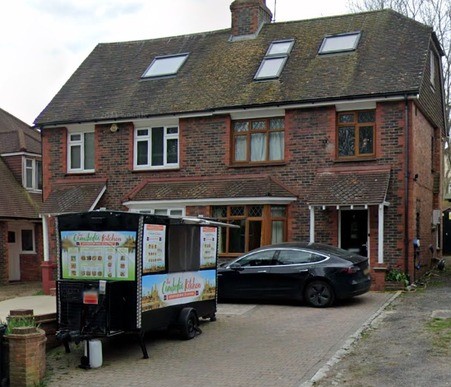 The council has received eight objections to her planning application and 14 emails and letters in support.

One objector, whose details were redacted by the council on its website, said: “I’m all for enterprise, but this will open the flood gates to others.

“We already have a traffic problem on the junction of Coldean Lane and Park Road at peak times, where vehicles park on the yellow lines to access the shops.

“This property is only a stone’s throw from there and would only exacerbate the problem. That end of Coldean Lane is already looking rundown due to the student accommodation (HMOs).

“And people queuing to obtain food from a portable trailer is not something you expect to see in someone’s front garden.”

A supporter, whose details were also redacted by the council, said: “I use the food van sometimes and it is quiet, no noise, no smell and a great healthy food option which I am so glad is there.

“It’s a tiny operation which seems to have one customer every half hour. It’s so quiet but they tick over. It’s ideal for a part-time option and a great asset in Coldean.”

The council’s Planning Committee is due to meet at Hove Town Hall at 2pm next Wednesday (1 December). The meeting is scheduled to be webcast on the council’s website.