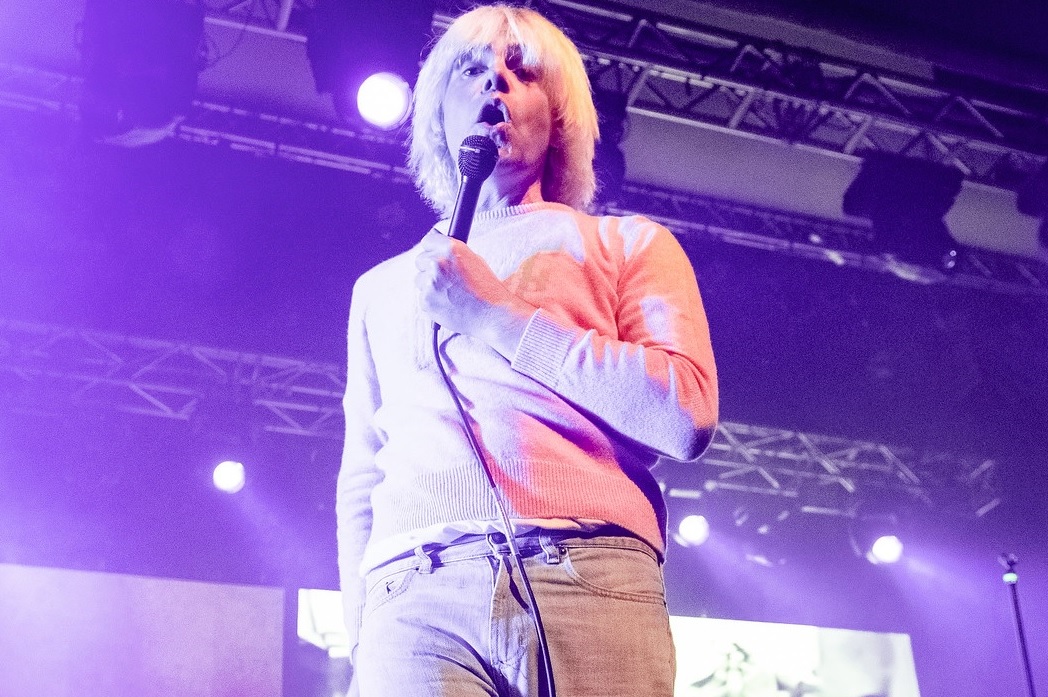 You would be hard pressed to find a good night out on a cold Monday evening in Bexhill, but Monday 29 November 2021 was an exception to the rule as the De La Warr Pavilion pulled off a masterstroke in bringing The Charlatans to town. 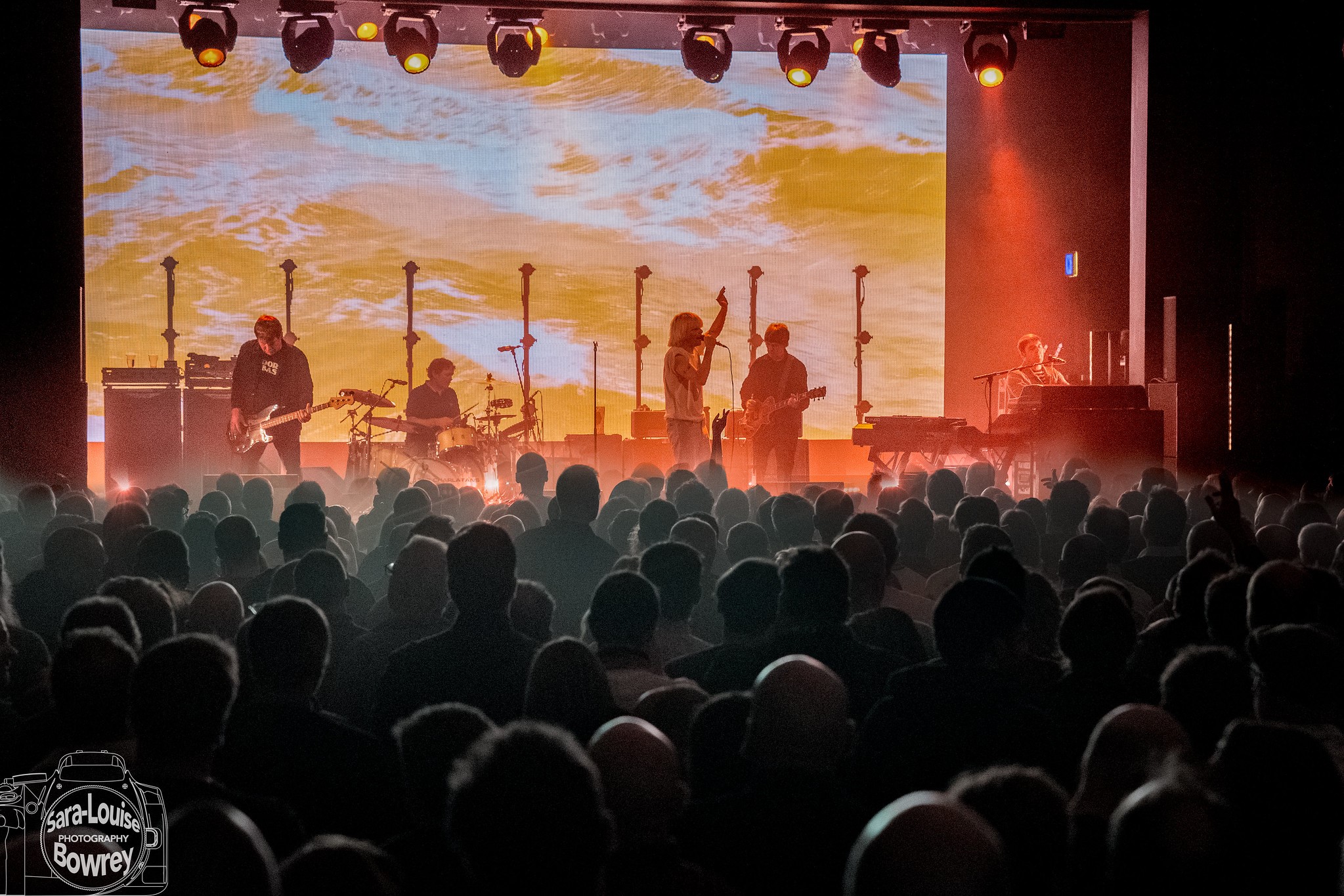 The last time I saw The Charlatans was supporting Oasis at Knebworth on 11th August 1996, when I was number 120,722 out of a mammoth 125,000 tickets sold though the estimated crowd is thought to have been nearer 145,000. It was a strange one for the band as original member and keyboardist Rob Collins had died just three weeks prior, but thankfully Martin Duffy from Primal Scream stepped up and learnt all the songs in record quick time.

Some might say that The Charlatans were even better than Oasis on that day in music history. It certainly worked in their favour as their next three singles were their most successful and all reached the Top 10 with ‘One To Another’ peaking at number three. The ticket back then was a mere £22.50 and also included sets from Cast, Kula Shaker, Manic Street Preachers and Dreadzone. I can well imagine that seeing the above line-up nowadays would cost in excess of £100, so forking out £33.50 for tonight’s show seemed a reasonable price to pay. 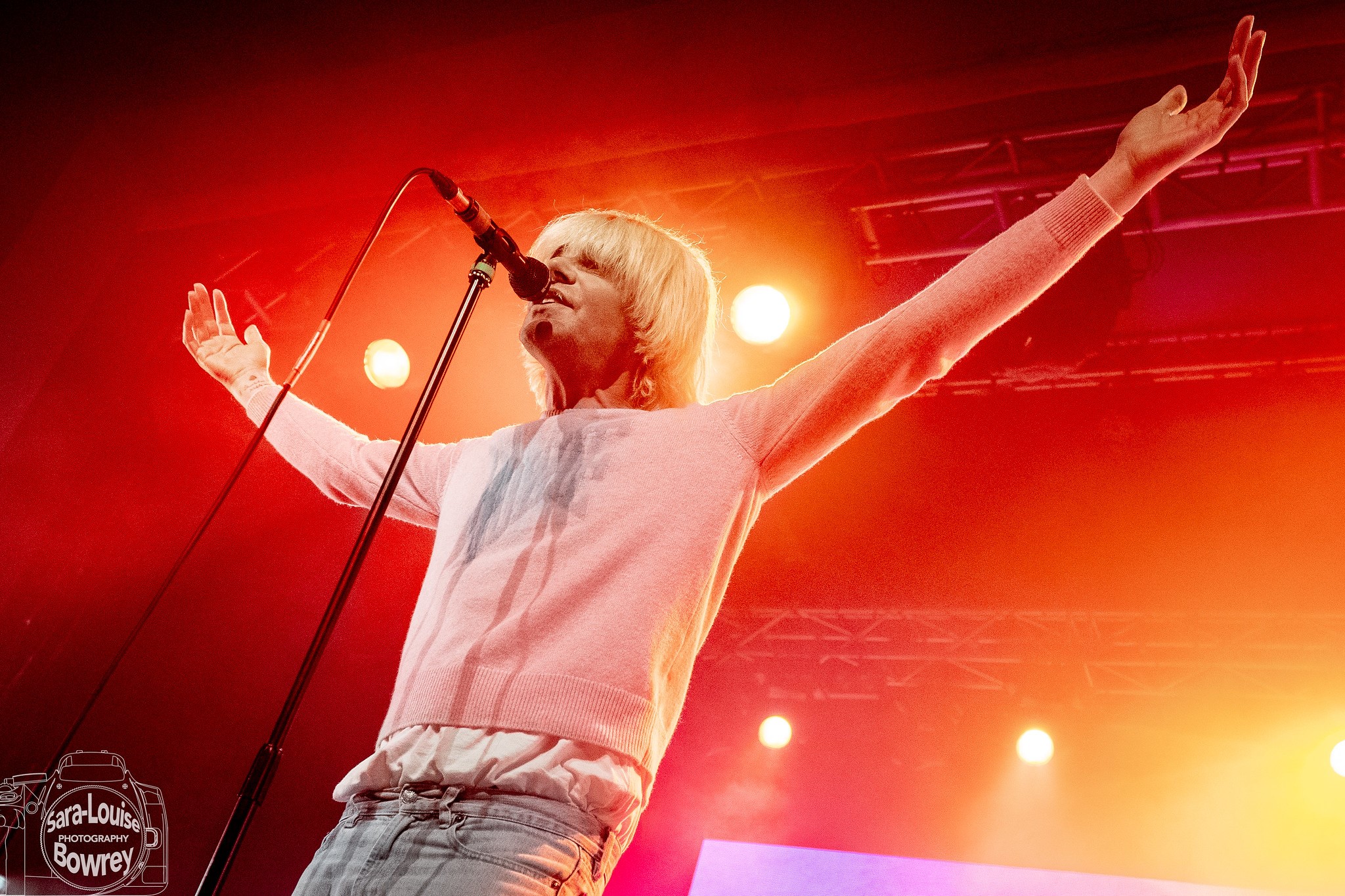 This was supposed to be The Charlatans 30th anniversary tour, but as with everything else it had been put back and was now labelled as their 31st anniversary tour to promote the new best-of compilation ‘A Head Full Of Ideas’. It had obviously caught the eyes of the locals and those from surrounding areas as I have never seen Bexhill so busy on a Monday night with parking at a premium. I narrowly missed out on four parking spaces in my quest to make it to the De La Warr Pavilion in time for the support act, Martin Carr & What Future. In fact I must have almost doubled the mileage in my journey from Hastings while trying to find a nearby parking space and in hindsight I should have just parked further away but it was rather chilly. 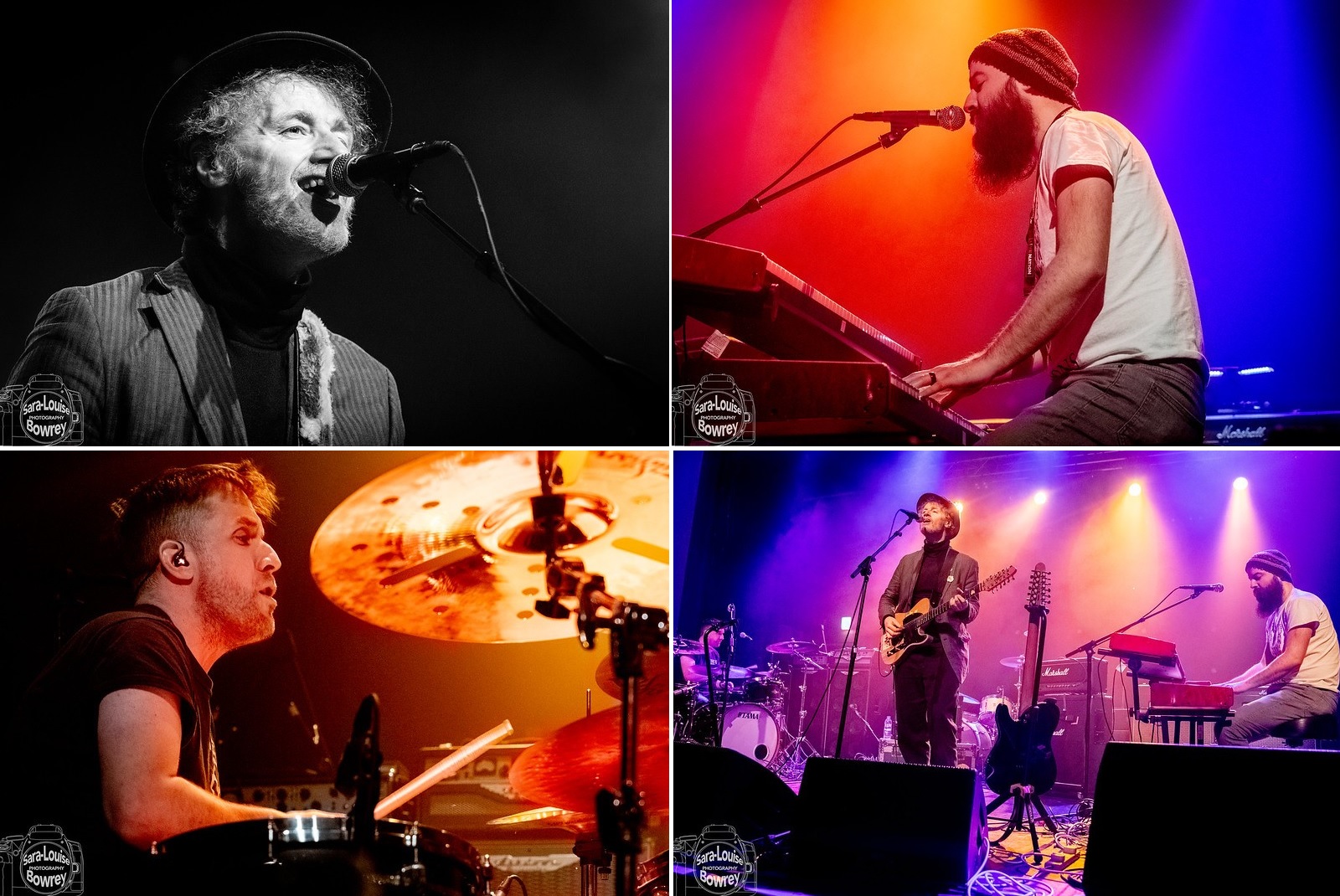 Martin Carr & What Future are only a three-piece tonight due to their bass player Gaz being struck down with Covid, but make light of this by reminding the audience that there have been many successful bands with just the three members such as The Jam (great choice) and Husker Du. Martin was formerly a guitarist with The Boo Radleys and tonight his set is well received by the audience, especially as their sound isn’t too dissimilar to a watered down version of the main act. A nice friendly warm up. Martin also reminds the audience that they have an album for sale at the merch stall and if they buy it then the band will be able to catch the 9.10pm bus home which will probably get them home by about March! 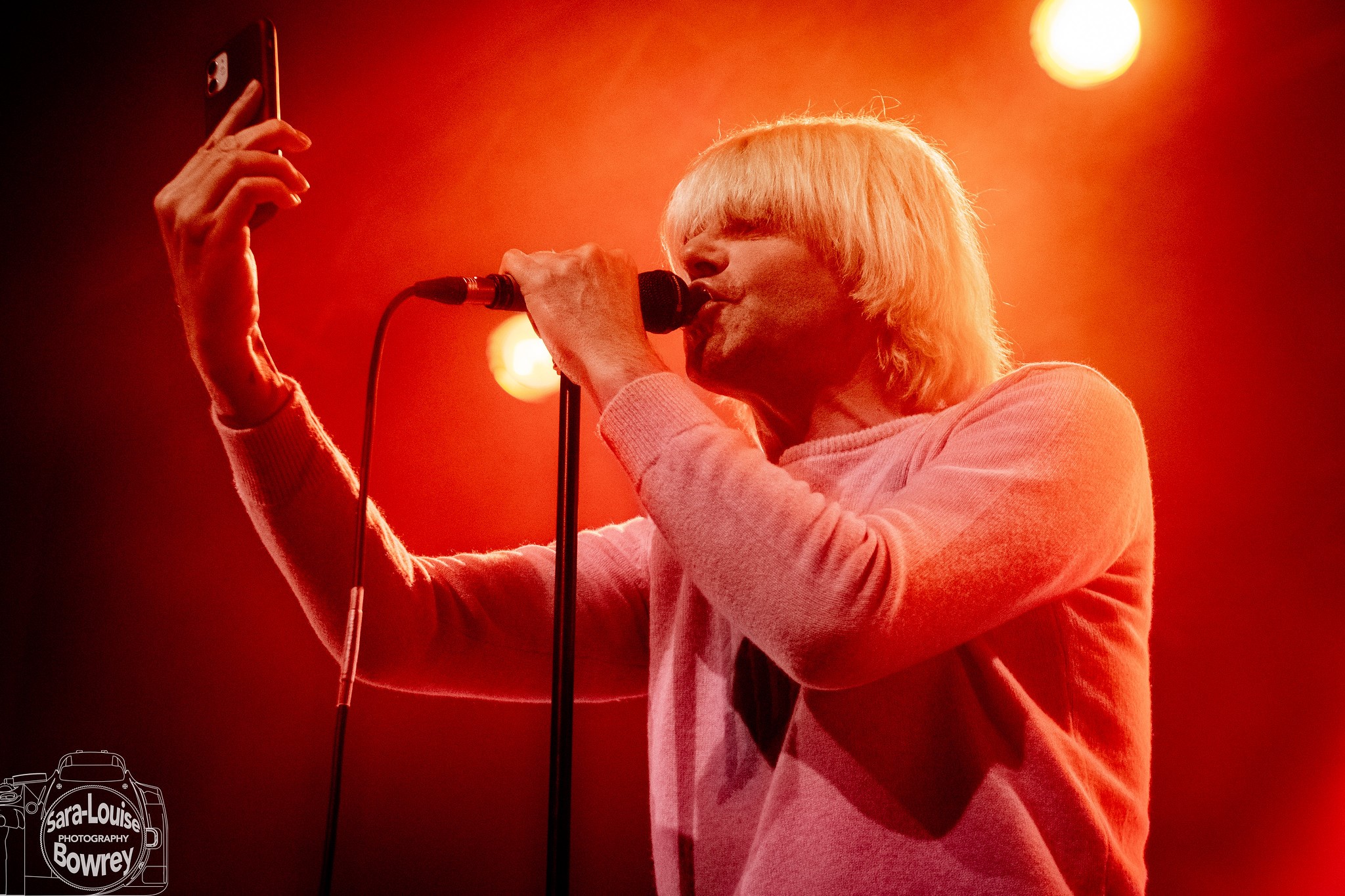 The Charlatans, though formed in the West Midlands, were associated with the Madchester music and cultural scene of the 1990s, when they relocated after Tim Burgess joined the band. While music was on hold for about 18 months throughout the pandemic, Tim Burgess was hosting album listening parties on Twitter of which I attended a few as some of my favourite bands were included.

The concept is simple. At a set time, you press play on the selected album and the band then live tweets along to the record, giving fans an insight into the chosen album of the show. This helped to keep me sane during those strange times and as a result of this I started to listen to The Charlatans more regularly. The listening parties have been a great success and continue to this day, though obviously Tim has other things on his mind such as touring at the moment, which brings me to the main reason the general public had descended on Bexhill tonight. 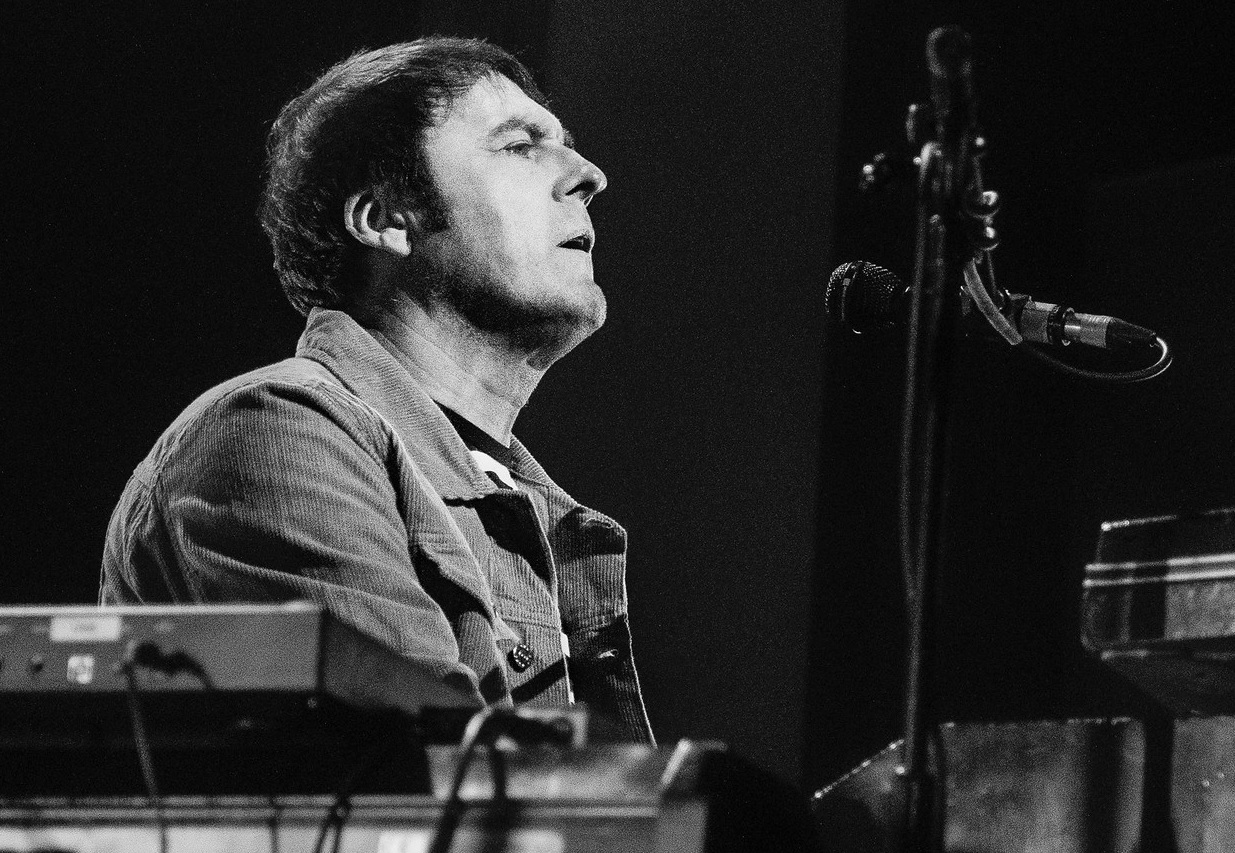 Some 20 minutes after being told by a member of staff that the band were due onstage in five minutes, founding member Martin Blunt (bass guitar), Mark Collins (guitar), Tony Rogers (keyboard and backing vocals) and Pete Salisbury (drums, formerly of The Verve) entered the stage to play the lengthy introduction to their single ‘Forever’ from 1999 which reached number 12 in the charts, giving them an early chance to show off their musical talents without any distraction.

Two and a half minutes later and a very trim looking Tim Burgess joined the band to the adulation of the audience. Sporting his bleach blonde barnet and dressed in a baby pink Bowie (Lonsdale-style print) sweatshirt which looked like it had shrunk in the wash, with faded jeans but no belt, Tim still manages to epitomise cool at the age of 55. Being of a similar age, if I was to wear jeans without a belt I would be showing off more than any audience could stomach, but he pulled it off effortlessly.

From the word go Tim was setting hearts a flutter with his stage presence, looking around the whole auditorium yet making it feel like he was looking just at you. His regular encouragement to get people dancing wasn’t actually needed as even those in the balcony were on their feet, but it had the crowd in raptures. I don’t think I have seen a frontman smile so much during a set. He was visibly happy to be back on stage and told us so.

An obvious difference since 1996 was his use of his mobile phone which he regularly brought out to film himself and the crowd. He really was loving it. It was Tim’s first time in Bexhill and he told us how he had tonight started his ‘journey’ as a result. 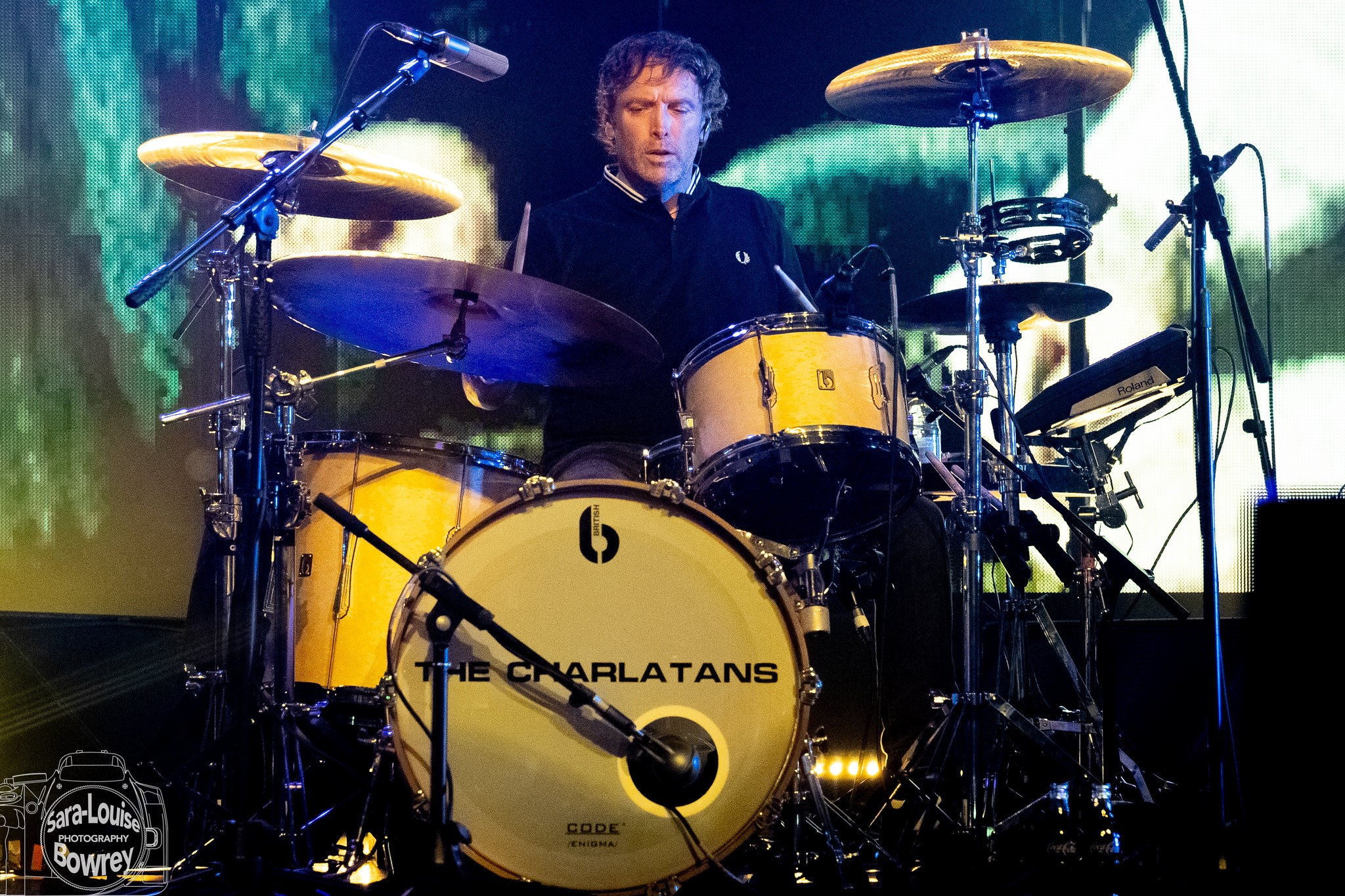 While all the music was going on I was particularly impressed with the backdrop which included video footage and photos of their journey as a band, including music paper cuttings. I actually wouldn’t mind seeing that again without the minor distraction of a live band playing in front of it. Stood near the front there was a good atmosphere. There was plenty of the typical Madchester dancing with a lot of arms in the air. A Liam Gallagher wannabe was standing in front of me with the haircut, unshaven look, parka, and the moves to go with it. Then there was his mate who knew every lyric going. Just behind me was the deafening screamer who shouted out “Tim, I love you” in my right ear. He responded with a bashful smile and blew a kiss in her direction, so much to her delight that I resisted telling her that it actually hit me on the cheek. Then there was one who was dancing as if he was high on an illegal substance, but he was just having a great time and told me he had already attended four dates of the current tour thus far. Now that’s dedication and he was worthy of the fist pump I offered. I can’t say that I saw any people wearing baggy jeans or bucket hats nearby though. 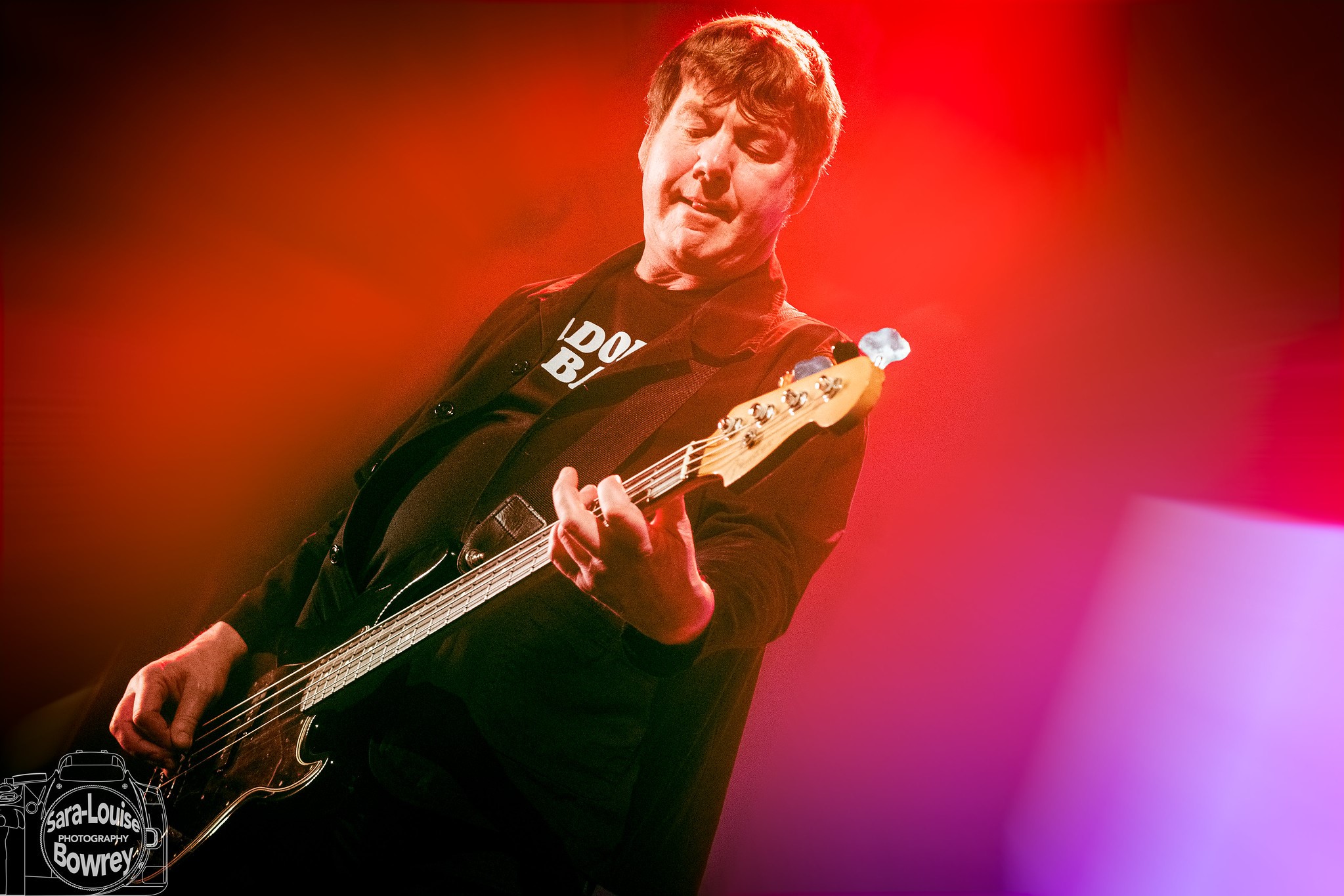 The setlist was near perfect as they covered most everything that the audience wanted to hear. From ‘Can’t Get Out Of Bed’ to the Ian Rankin ‘Future Tense’ spoken word leading into ‘Plastic Machinery’, to ‘Sleepy Little Sunshine Boy’ which Tim joked was written when they were babies as they used to sleep a lot, I was enjoying the journey.

Obviously the Top 10 singles went down well with the main set finishing with three of their most well-known songs; ‘The Only One I Know’, ‘North Country Boy’ and ‘How High’, you would be hard pressed to find a better end to any set. There was still time for a three song encore as the De La Warr Pavilion ran into overtime. Finishing off the evening with the extended nine-minute version of ‘Sproston Green’, Tim left the stage to leave the band to play out the evening, including some keyboard wizardry from Tony Rogers, and take the final plaudits from the audience.

I heard some people say that the sound was a bit bass top heavy, maybe a founding member privilege, but from where I was standing it wasn’t so noticeable and didn’t affect my enjoyment as I was taken back to the haze that was the nineties Madchester scene. Tonight really was a career-spanning celebration of The Charlatans, one of the most enduring and best-loved indie rock bands in the country, lasting around about 100 minutes which actually went surprisingly quick. It’s safe to say that the die-hard fans left the venue much warmer than when they had entered. For further information on The Charlatans, visit www.thecharlatans.net 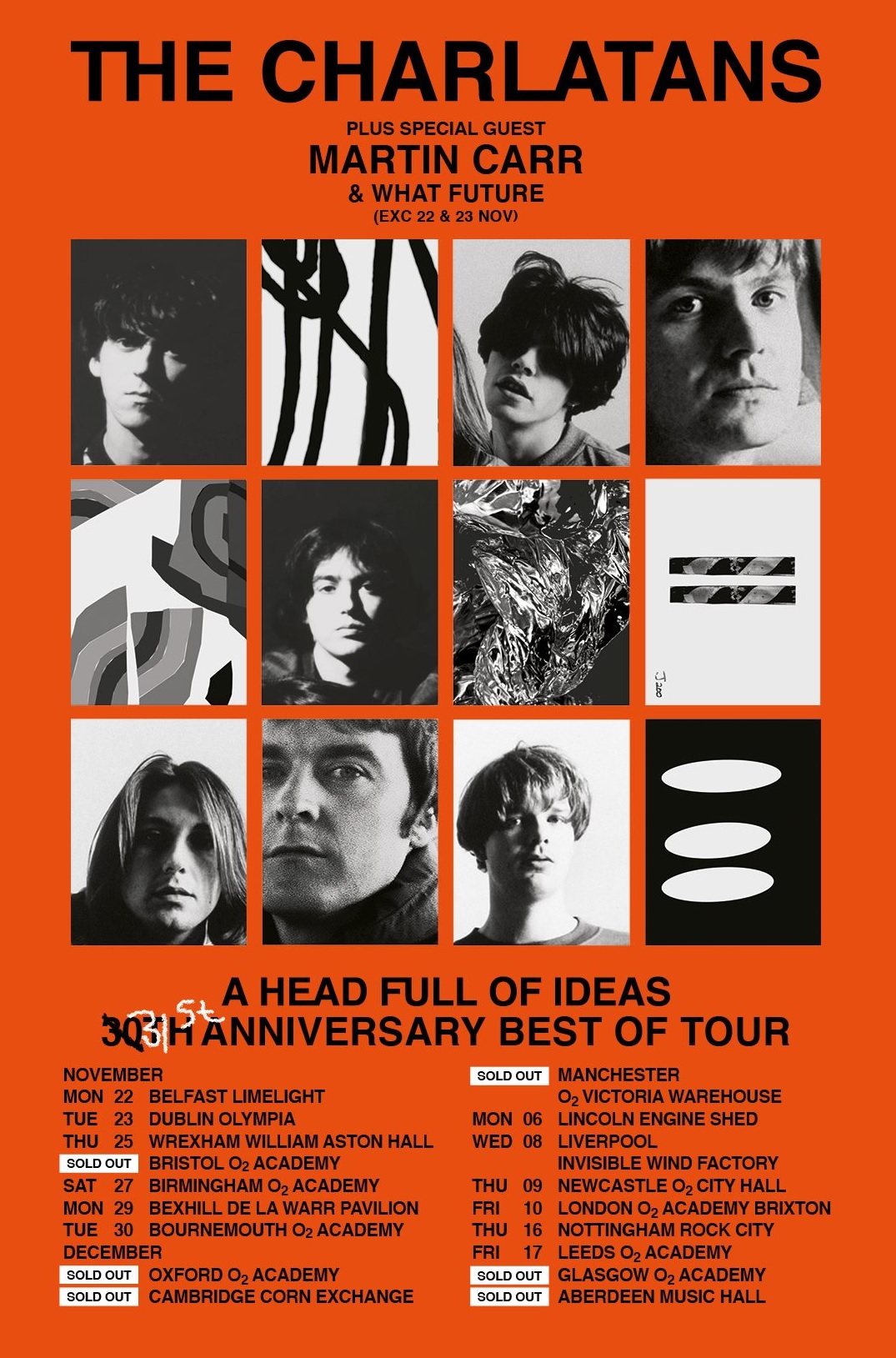 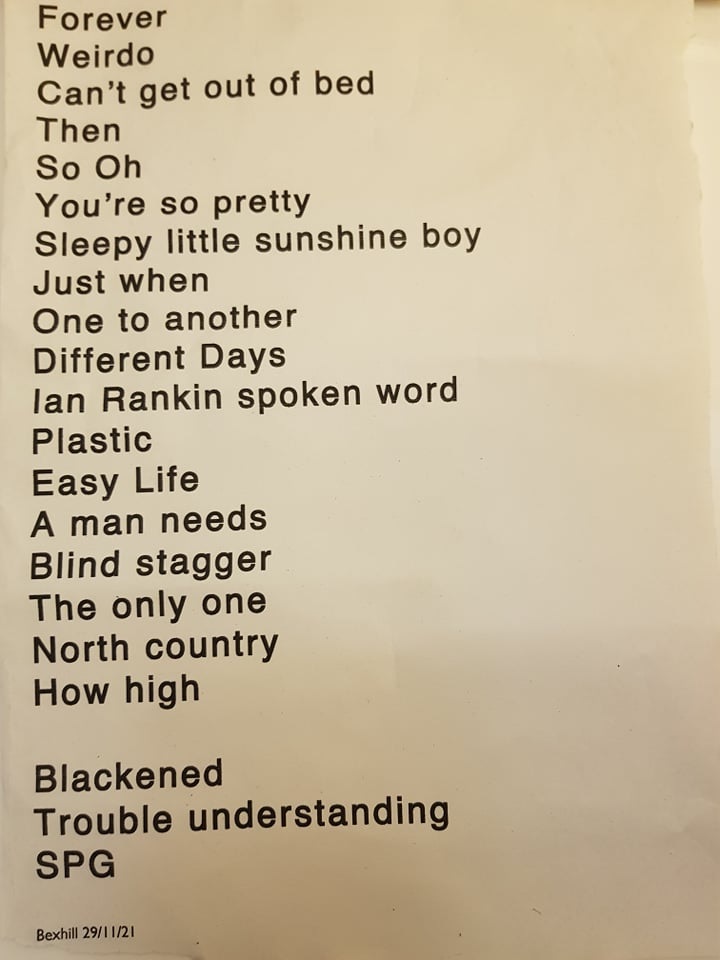